What a long week it's been! Luckily, it seems to be preparing for a long weekend, as a good coating of snow is forecast for this afternoon and tonight, which will interfere with getting to work Monday, hee hee! And the thing that made it such a long week, my root canal first thing last Monday, seems to have finally decided to wind down in the swelling and pain department. It was fine Monday night, not too bad Tuesday... But Wednesday! OY!!!! Picture me in the middle of the night rifling through every corner of the house trying to find something stronger than aspirin! Luckily for me I'd bought a new first aid kit for my hurricane corner that I finally recalled and -- tra la! Acetamenophin AND isowhatsitsface! Worked wonders! Pats on the back for me for not overdosing when I really, really wanted to.

Speaking of health problems (what a great time we live in! Imagine coming down with some of this stuff a mere fifty years ago, or a hundred!), a shout-out to Mart Gray! I've been looking all around trying to find where he said he'd been having some medical probs, because Gail Simone gave him a "get well soon" wish on the DCMBs. Can't find it at all, but get well soon from this corner as well, Mart! When I get back to work where I have your email addie, I'll drop you a line. You know, you might mention such things in your blog. I'm just sayin'...

A column or two down I asked about how do you know something is finished? Seems I decided to work a bit more on my "finished" painting. Then I said, "Yeah, that's all right!" which I hadn't before, so it does appear to be finished-finished. I had to name the jpg so it's called "Evening Copse." You know, as in "bad trees, bad trees, whatcha gonna do?" 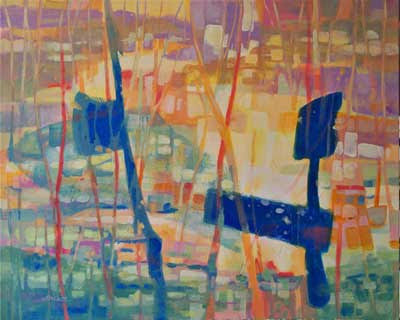 In the meantime I started another pic and decided not to continue putting up "I think it's finished" pics every week until even I couldn't stand it. So here's... What did I call it? "Frolic in Blue," a dorky enough name which might be changed though I think the pic won't. 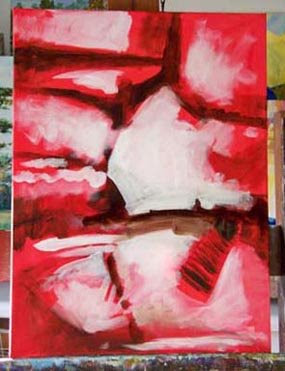 The one on the left, or the red one, however this is going to be displayed, is my value underpainting, which came in handy as I'd photographed it and could adjust the thing in its final stages. I like the red version, too. Have to try to do a finished something along those lines as an experiment sometime. This year I'm really trying to concentrate on having an interesting value pattern in my work. They say if you have that you can screw everything else up and still get a nice painting. I'm also trying to paint in a more painterly manner. And learn more about acrylics and abstracts. So far so good; I just need to up my production rate. 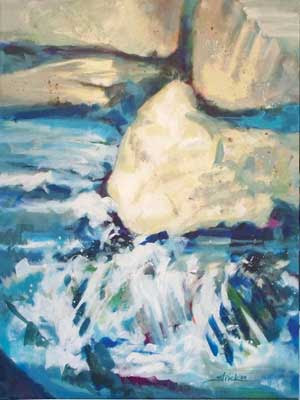 I'm also working on my color choices. For example, this painting was supposed to have been a four-color painting, based on Bob Burridge's color theories. It turned into a more sedate complementary scheme, but Bob's two "spice colors" do show up faintly. I'll have to work some more on that. Oh -- I also incorporated Bob Rankin's ideas for abstracting from reality. Thanks to Jerry's Artarama's free demo videos on their website, I was able to recall what I'd learned during his courses, ran out and got some reference picture books (he uses National Geographics), and did this. It's not nearly as abstract as it should be (the red version shows what the original idea was), but it's more abstract than how I usually work. I'm getting there. I'll learn abstraction yet.

At this point I'd wax on about the lovely writing courses I've been taking this month (which have partially kept me from working on my wip) (very partially; the other part is procrastination rooted in a fear of not creating perfection), but I think I'll save that for next week, which will allow me to make the column a more writing-specialized one.

Have a great week out there!
Posted by Carol A. Strickland at 9:30 AM

My best wishes for a full recovery to Mart as well, though he probably won't remember who I am.

Also good wishes to yourself, and I hope at least you remember me...

Only if you're Richard Burton. Hey there!