I think I've finally finished that painting that I started last... May? at the Raleigh Plein Air Paint out. Let's look at what I brought home that day after a few hours of hard work on location: 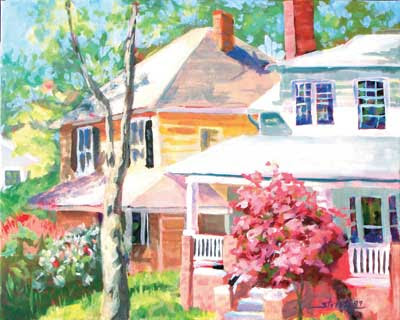 Well, I thought it was pretty much a disaster. I was working on that roof on the right asking myself, "Why did I pick this scene? Why did I zero in on this big, blank roof?"

When I got home and looked at the photos I'd taken, I realized why: because when I'd started there was a great shadow on that roof. The sun had moved a LOT during the course of the painting and I hadn't made enough sketches before I began to show where the light should be. So the painting ended up as an afternoon picture instead of a morning one.

So I've been working on it: 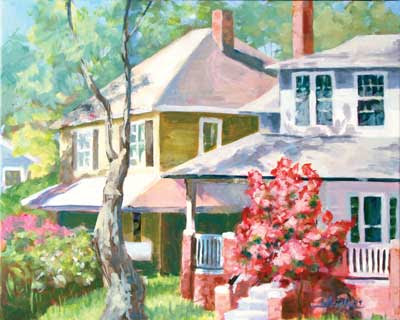 And it seems fairly much "there" now, though I may do a little more work on it. Notice how I changed the shape of the tree so it's not a big vertical stick, just like the stick houses behind it, but rather has some curve to it and variance in width.

Now the eye can enter at that red tree on the right, travel up the bright roof following that great shadow, jump over to the other roof and travel down, latch onto the tree and curve around back to the red tree. The eye stays within the painting.

I also had fun simplifying the background trees. Think I'll be working on simplification this year. I'm trying to get away from strict implementation of what's on the picture/what's in front of me, and back away at the half-way point to start to worry about what works for the PICTURE and not how to best mimic the actual scene.

Thus the red bushes on the left, which I'd been so excited about with their fiery red tips. Instead now they're blurred and blued up to push them off into the distance, away from our central interest points.

I wish I'd rearranged the houses more. That porch roof ends right where the sides of the background house turn into shadow, creating a natural focal point. I had to blur that down and adjust values so it wouldn't stand out so much.

Anyway, that's it on this picture for now (maybe a few minor brushstrokes needed here and there) except that I need to paint the sides of the canvas still. I needed to get it done today to include it in a portfolio I'm putting together that has a deadline of next week.

Hope you enjoy!
Posted by Carol A. Strickland at 4:46 PM

I like both paintings, actually, but your commentary on the changes to the second painting really make a lot of sense. Beautiful work!