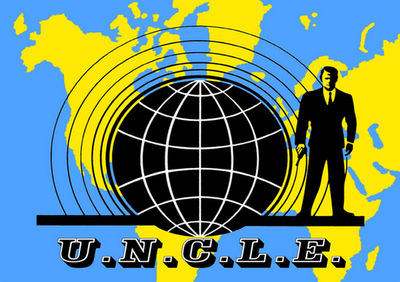 Before Star Trek, practically days after the Beatles hit America... There was The Man from U.N.C.L.E.

I was mad for the show! I don't really recall what the first episode I ever watched was, but I recall the impact the show had on me. My very first fanfic involved the Beatles and UNCLE.

What's this UNCLE, you ask? Philistine! UNCLE was (of course) the United Network Command for Law and Enforcement, an international spy organization that utilized cool spy equipment and went on exciting spy adventures, laced with humor and pure sex in the form of Illya Kuryakin, Agent #2 of Section 2.

Oh yeah, Napoleon Solo was there as well. He was #1 of Section 2, even if he always wore a badge that said "II". (According to Wiki, this was Roman Numerals for Section 2, used in the first season and for some reason retained by Robert Vaughn for further seasons even though other agents didn't go by that system.)

James Bond had barely made an impression on the US when UNCLE first appeared. All I knew was that here were two agents of an international organization—and one of them was Russian!!! in a time of Cold War—who could pull to the side of a New York street, step down into DelFloria's Tailor Shop, and, after DelFloria pressed his shirt press twice, could enter a secret entrance into UNCLE HQ via the back of a dressing room.

The coat hook they had to pull down to release the secret door is now on display at the CIA Museum in Washington, DC. Really. Look it up.

The show lasted for 3 1/2 seasons. Fist season was b&w, supposedly to pay tribute to b&w spy movies. Second season is considered the best. By season 3 the show had instructions to be more Batman-like, since Batmania was then sweeping the nation. Season 4 saw things put back aright, although with less humor than the first seasons. 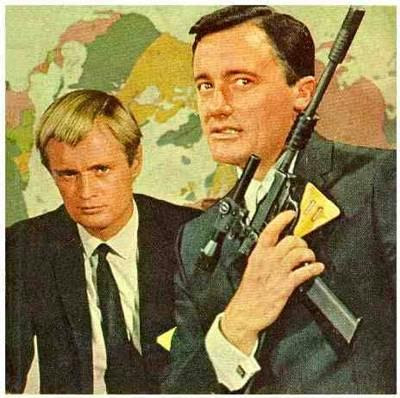 The show didn't have a huge budget. You see the same locations used over and over again: first as riverfront in Germany; this time as a Norwegian fishing village, then as part of a New England town. The economics made them inventive, just as Star Trek's staff had to be a year or so later. Speaking of ST:TOS, you'll see a lot of guest crossover between the shows. I watched an entire episode before discovering on the final credits that James Doohan had been one of the primary crew on the ship that had been the setting. Many of the stars making the rounds during the early/mid-Sixties showed up, as did big names, once UNCLE was the #1-rated show and everyone wanted to be on it.

My fanfic concerned a fact few people knew: that Minot Air Force Base (where our family was then stationed) had an underground network run by UNCLE but called (of course) MABLE, for Minot Air Base Law Enforcement. Now, who was their primary secret agent? I'm not saying!

UNCLE's Illya Kuryakin was the very definition of ultimate cool. He had a Beatle-ish haircut and British accent. He was slim, athletic, intellectual, and listened to jazz while wearing shades. He seldom smiled. And he was Russian, such an exotic nationality! He wasn't like Khrushchev at all, never pounded his shoe on anything. He worked for Good.

Give NBC a year or so and they'd have a similar alien, exotic guy with bangs and no smile called Mr. Spock.

It was a great time to go through puberty. 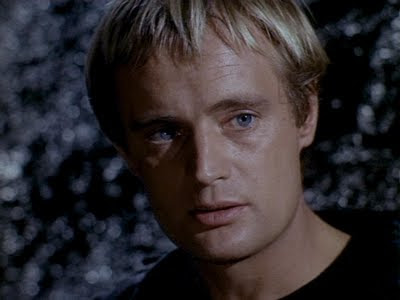 Illya has matured to now be Ducky on NCIS. It's amazing how sexy a man in his seventies can be! I look at Ducky and see Illya. One time one of the NCIS personnel asked the head guy what Ducky had looked like in his youth. "Like Illya Kuryakin," was the reply. 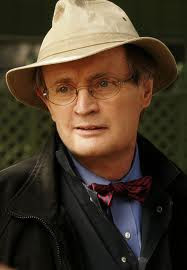 One can now buy UNCLE as a complete set. It took a long while to come out, as there were legal problems as to who actually owned the episodes. It costs about $99 from Time-Life and comes in a secret agent attache case with some pretty nice extra features. No pen phone though, darn it.

If you want to further your UNCLE research, find some of the novels put out as part of the extensive marketing the show did. (It was one of the first, if not THE first, to emphasize marketing. I know I had the UNCLE board game and had seen the various guns, ID cards, dolls and such. Alas, my allowance wouldn't stretch that far.) The novels written by David McDaniel are by far the best of the bunch, and two of those are volumes I've kept through the years and reread: Vol. 4, The Dagger Affair (when I went to San Francisco a few years ago I was THRILLED!!!! to see Lombard Street, where our Men from UNCLE had dragged an evil agent down the hill to get him to spill information), and Vol 6, The Vampire Affair.

McDaniel really got UNCLE, the characters, the off-beat style, and best of all, the humor. It was also McDaniel who informed us that "Thrush," the evil organization who sat opposite UNCLE in worldly affairs, was actually an acronym: Technological Hierarchy for the Removal of Undesirables and the Subjugation of Humanity.

Occasionally I've wondered what, besides Illya, has kept UNCLE so dear to my heart all these years. It's only when I look at my other non-Beatle obsessions that I begin to see the connection: UNCLE, Star Trek, Wonder Woman.

They're all about working for a positive future. They're about the world working as one. We had a Russian working smoothly with Americans on UNCLE, as well as glimpses of UNCLE agents around the world, all part of one glorious and law-abiding society set to make sure that the human race lived to see its future. Star Trek showed us that future, and the people there worked to better themselves and others. We had a multi-ethnic, international/interplanetary crew who were all friends. With Wonder Woman, she works around the world empowering people (and herself), working for a better tomorrow for everyone.

So it's really no surprise why I should be such a fan.

One of the lovely sidebars of the collected set contains a short about UNCLE fandom. A professor goes on camera and recalls the time she sent her students home with an assignment: "Say to your mother: 'Illya Kuryakin.'" She reported that one of her students came back to tell of his mother letting out a scream of delight just at the name.

The other day I heard that UNCLE is going to be getting a remake by Steven Soderbergh, done as a Sixties period piece. I have to wonder just how much of the UNCLE magic can be recaptured, and how today's jaded audiences who seem merely to want explosion after shiny explosion, will take it.

Were you a fan? Did you prefer Illya or Napoleon? (Or April or Mark?) Or was there some other TV show that caught your imagination and has been able to hold it for years? Open Channel D and comment! 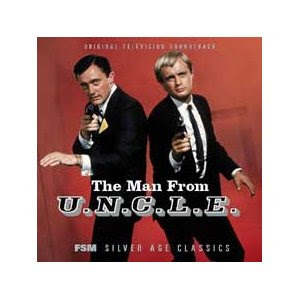 Posted by Carol A. Strickland at 9:03 PM