Last Thanksgiving we moved our parents to Jackson, Tennessee, where they can be near my sister and her family. Since then they've lived in three places: a temporary place, an independent-living place, and an assisted-living place just down the hall from place #2.

Looks like they'll have to be moved again, this time to a nursing home.

But getting to them is now much more of a chore than it had been. Now it requires air travel (since trains don't travel east to west in most of the US). Air travel and I don't get along too well, but I'm getting better at it or maybe the planes are.

But arriving in Nashville, which is about 3 hours from my sister, I wondered: where do people meet each other in the airport? To me, it seemed the baggage area was the logical place, but my sister was nowhere to be found. I dragged out my cellphone, which I've used all of maybe 3 times since I got it (I don't understand cells!), and cursed that I hadn't packed the instruction book. Still, I got the phone to say, "Hello?" before a call blanked. So someone somewhere had gotten it. I tried Karen at home and got my brother-in-law, Bruce.

He explained that she'd gotten her times mixed up. Instead of my landing time, she had been operating by my take-off time four days from then. She'd realized her mistake and taken off 1/2 hour before my plane was slated to arrive.

And she made it only an hour late. The cops ALL must have been looking the other way! Perhaps the sonic boom distracted them.

I was starving; I was outside the security area. All there was left was a rinky-dink restaurant. (Tootsie's) I ordered an $8 chunk of iceberg lettuce and some dressing and sat down to wait. Soon a young, lanky guy in cowboy hat and boots saunters up with a guitar, sits down about ten feet from me, and starts tuning up.

There was a stage there. It pointed at the exit from the security area. I now noticed large speakers on the ceiling.

Well, he begins to sing a song about wantin' to be a cowboy so he could get all the purty girls. I'm not sure, but I think he had a nice voice and could play well. The speakers were those that muffle the sound so it becomes kinda wa-wa-wa. I wondered why such speakers were allowed within twenty miles of Nashville, but there they were.

Loud volume and I don't get along, so I didn't finish my lettuce and got out of there. Downstairs, back in the baggage area, I managed to read some more of my Nora Roberts book. I've never been able to get into her stuff before (under any name), but this book was very good. (I've ordered 2 of the sequels.) On the trip back to NC I realized that reading McKee's Story wasn't going to keep my mind off my imminent demise from falling from the sky, so I got another Nora book and man, was it good! Now I understand why she's the queen.

Anyway, we got to my parents' place and discovered that Mom pretty much stays in bed in a semi-trance all day (she has no control over lower digestive functions and has to have the nurses wash and dress her). This drives my dad crazy. She'll get up for meals and therapy, but sometimes not even that much. Dad is confused and angry most of the time. He can't get the remote on the TV to work, and so watches (snoozes in front of) bad TV because he can't figure that hitting the "up" or "down" buttons will let him change channels. Sometimes he hits numbers and gets something new that way, but he doesn't know which channels he gets, so it's hit or miss.

I took Dad shopping/riding and put up some drapes, pictures and a clock for them. I also put up a calendar next to a new white board because Dad used to love keeping track of things, writing down appts, etc. He liked this. Four hours later he hated, hated, HATED it, and how could I have possibly imagined it was a good idea???

These are all symptoms of their different forms of Alzheimer's. Judging from Mom's condition and Dad's inability to do simple tasks like the remote, my sister and I think it may be time to move them to a nursing home. The doctor says that Mom certainly belongs there, but being without Mom would drive Dad crazy, so they should go together.

I took Dad to the Steak & Shake and had one of the best burgers of my life. Yum! He didn't like his tea (too sweet) and tried to get the waitress' attention. "HEY, BLONDIE!" he yelled. Luckily, his yell is just a croak these days (COPD), so she didn't hear, and he got mad when I chastised him for being rude.

We went to my sister's house for dinner one night. Karen and Bruce are trying to sell their house, which is a modest place in a modest neighborhood that looks like it might have been built/last decorated during the Eisenhower administration. They've filled it with big-ass furniture. Lots and lots of big-ass furniture. Which makes it look tiny. This is not helped by having about fifteen people (on average) living and/or passing through the place, along with assorted pets and lots of toys for the grandkids. The front door is blocked because there's furniture in front of it; the dining table touches the patio door.

Somewhere in there is likely a nice starter home, if people don't mind the fact that the toilet chugs like a train starting up, or that the lights keep flickering.

They cannot figure out why it doesn't sell, and blame it on the big military installation in town that's closing. I keep saying, "Stage your house! Don't forget the curb appeal!" (The latter of which can't be seen because there are eleventy cars parked in their drive and on their front lawn.)

Well, we got some visiting done, I met my new niece-in-law, who is valiantly trying to hold that baby in for another two weeks, at which point my nephew's health insurance kicks in, and I made M&D's place slightly more homey, for however long they'll be there.

Let me just mention that the staff at their place are all SAINTS. Utter and complete SAINTS.

Said goodbye to M&D, hopped in the car with Bruce, and he drove me back to Nashville. Two and a half hours early. Oh well, I got my walking in.

Also had lunch at the airport because Bruce wasn't hungry and didn't want to stop elsewhere beforehand. I went to "Tennessee Tavern," which advertised that it has that famous BBQ that they make in Memphis. I hate BBQ and so ordered a cheeseburger and tea.

Oh, so that's where all the pink slime went. The so-called burger ($16) was huge, tasteless, and had no texture to it. I took a sip of the nearly-transparent tea and set it down. "Can I get some real tea?" I asked the waitress.

"That's instant," she whispered, looking at my glass.

This place, named after Tennessee, didn't know how to make instant, much less real iced tea. They managed to get me some ginger ale, which helped settle my stomach. (I'd been traveling with the help of Pepto. Great timing, intestines.)

Part of my walking took me past a TN tourism place that was spotlighting Moon Pies as part of the culture. An older/mature woman, dressed to the hilt, stood next to a display and picked up a box. "Moon. Pies," she said wonderingly. She examined it like she was at a museum. Perhaps she thought it came from the moon. 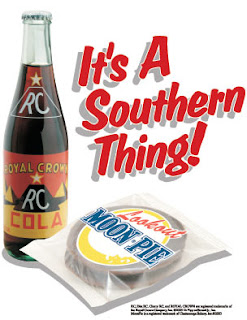 The display didn't mention RC Cola anywhere. What's up with that?

On one leg of the plane trip back, I sat behind a row that included two very young kids (5 YO?) who'd never been on a plane before. "Look how far down!" one shrieked as I clenched my seat's arms, helping the plane stay in the air. They were so excited by every aspect of flying that I tried to remind myself that one of the purposes of coming back during this era was for me to delight in the technological changes. Having 4 flights within days of each other helped me figure out the various motions that a plane goes through that is normal for it and not something to review my religious standing over.

Still, when the little girl squealed, "I see another plane!" all I could think of was: Mid-air collision ahead! Goodbye, world!


But we had a crazy pilot on the final leg, cracking jokes and such. The plane itself was a friendly one. (Always check your plane's attitude before boarding. I once encountered a plane that said, "I feel sick," and sure enough, within five minutes a repair crew had scrambled to begin working on it. We got another plane.) The pilot warned us about approaching turbulence, and I imagined us going down a bumpy road. Not bad. Not bad at all.

But I hope I don't have to make a trip to TN for another year!
Posted by Carol A. Strickland at 11:01 AM 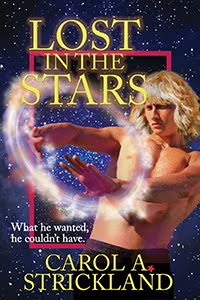 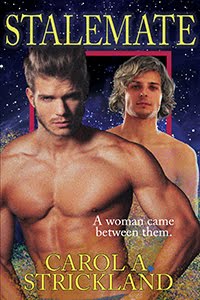 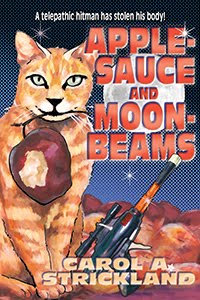