It's been a trial keeping house numbers located near the road. I have a long drive, so cannot put them on the house. When I first moved in, we were allowed to have our mailboxes next to our drives. That alone ranked far too high up in my reasons to buy this place. It was so handy—a mailbox with proper numbers on it, next to the drive. If I felt particularly lazy, I could reach in from my car to grab stuff.

But someone ran into my mailbox. I worked hard to fix it. Then someone else ran into it, leaving a 4x4x24" splinter of wood and collapsed metal thing that had once been the box. (And they ruined my beautiful "Moose Crossing" sign, the one I used as a landmark to give directions to people.) The cops showed me where the person had actually gotten on the road shoulder and revved up to accomplish their foul deed.

The mail carrier says that this portion of her route has seen more assassinated mailboxes than any other place in the bi-county area.

So I got one of those "you can't destroy this" mailboxes and put it in. Someone tried; someone FAILED. Bwah-ha-ha, burn in hell!

Then the Post Office told us we had to relocate our mail boxes to the opposite side of the street. Poop! Oh well, I dug and re-cemented and even put one of those rubber mulch mats around the bottom of it to keep out weeds. It's located just beyond my neighbor's box, so you can't see the number on it if you come from the main direction.

(Over there it's still not safe. One day a rock deliverer who was approximately 150 years old, backed out of my drive right into the mailboxes. Didn't bother him a bit to do so. I had to call Scott Sand & Stone to inform them; they checked their truck for damage; they replaced my neighbor's box and repaired mine—within 24 hours, and with an apology to all parties. I love Scott Sand & Stone.) (And on a different occasion, the guy backed into one of my trees, even though I was shouting and waving at him right outside his truck to stop. He didn't think it was a big deal.)

So I went to Lowe's and got some fancier-than-average cement blocks, the kind with the little lip so that successive levels sit back in a sturdy manner. I purchased four number tiles and a frame to put them in. Special glue stuck everything together, and I even included some heavy-duty wire so people couldn't pull my number plate out of the shebang.

One day I came home to find that someone had taken the entire bottom course of blocks. Left everything else, though. But now the numbers sat one layer lower, practically on the ground.

Sitting in my office, which sorta faces the road, I can always see delivery people trying to find me. A truck will drive slowly down the street and about 40 seconds later, they'll return to turn in my drive. Sometimes they'll be coming in backwards. They couldn't see the numbers well and had to logic things out.

This was not good for an emergency.

Last week I came home to find tire tracks coming out of my neighbor's drive. For some reason though we're in the middle of the block, people turn into her drive and back out to turn around. My drive doesn't line up perfectly with hers. Guess what does? Cement blocks and tiles were scattered hither, not to mention yon. Why should I repair this when it would only happen again?

I got a mason to come out. He was a surfer dude and didn't quite look sober, but he had a nice-looking portfolio and an upcoming vacation before which he said he could get the job done. Besides, he was the only mason in the book whose number hadn't been disconnected.

At my old place I had a HUGE rock wall/planter that I gave up on halfway through, which was about 5 years into the job. The guy I hired to finish showed up a couple of times over a series of months and then asked for the entire final payment when there was still quite a bit left to do. "Sure, when you're finished," I told him. A week later HIS FATHER calls me. Dad was also a mason, but one with a sense of ethics. He begged me to pay his son and assured me that the son would indeed finish the job. (Son had to go to Nashville to be a music star.) "Sure," I told Dad. "After the job is finished."

That night, all night, with his radio blasting (argh) C&W beneath my bedroom window, Son finished the by-god job. And I paid him on my way out the door the next morning. He had done fine work, too.

This Surfer Dude struck me much the same way, but this was a TINY job. Surfer Dude had forgotten to bring a contract but was enthused about writing one out for me. It even had all the information I needed on it. I gave him half the money.

We had discussed the project, which would not be a stone wall, but rather a boulder. "They'll notice it," Dude assured me, and showed me approximately how big it would be. We discussed how an impact monitor might be installed on it to activate Giant Killer Steel Ginsu Blades o' Death that could slash tires and a good part of a car/truck's back end.

"I'll see what I can find," he assured me. As I pondered the question, I thought that deer, dogs and/or kids might harm themselves accidentally on these. Perhaps they'd be best left off. 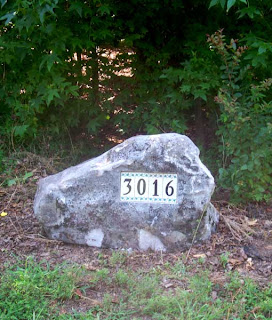 Dude returned three days later with the world's loveliest house number boulder! Isn't it great? I'm glad he didn't include the tile frame, as that might have cheapened the effect.

So I'm happy; people can find the house easily. Now I'm googling and discovered these. Yes? No?
Posted by Carol A. Strickland at 1:38 PM

I have been ready to earn name for myself over the web simply because of commentluv-blogs. The list you have got provided U.S. provides folks like Pine Tree State to share their concepts over the online. Thanks ..
Lafayette Orthodontist

Hey ,
Awesome assortment of Commentluv blogs.It will be terribly helpful on behalf of me.