Dashing through the Nasher 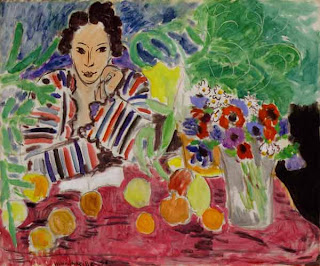 I've lived here how long? And haven't been to the Nasher Museum at Dook? My bad.

Yesterday UNC-EX (explorer) aired one of their splendid programs on art exhibits touring in the area. Turns out highlights of the collection of the Cone Sisters of Baltimore (and Cone Mills of NC) is showing at the museum. What the heck—it's a 3-day weekend and the extra time should be spent on something special, right?

I checked directions on Mapquest and saw the location of the parking lot in relation to the museum. Then I set out. Success! Found it on the first try! (What is this "GPS" you speak of, Kimosabe?) Unfortunately the lot was full. I also didn't see any signage about parking fees, which the museum site had mentioned. Must not be up to date, whew.

So I circled. Signs had said that more parking was available at the Sarah P. Dook Gardens, about three long blocks away. Whoops. I drove past them and figured out which road I should take to get there. Then I overshot the entrance. Instead of looking for it, I was fascinated by the HORDES of people strolling in the museum's general direction from the Gardens. Sheesh. The museum had only opened about twenty minutes before.

So I circled back to the Gardens, but did so via the museum's parking lot. Ack! People were getting in a car! I backed up, waited, and felt quite superior in getting the spot.

On the way in, I looked for "Pay for Parking" kiosks, just in case. Didn't see anything. Thus it was up a BUNCH of stairs and into the museum, where the line was not long at all.

It was kind of peculiar, though. I could hear people at the beginning of the line exclaim, "What?!" One would get to the cashier. "What?!" The next person would step up. "What?!" And so on.

I got to the ticket lady. "Why's everyone so upset?" I asked.

"What?! I didn't see any parking signs!"

"Oh, they're kind of lax in handing out tickets on Sunday. If you're worried, put this sticker on your shirt and you can get in again without breaking line."

Like heck I was going to go down all those steps again and search for a parking kiosk. There were NO signs for parking fees. (I looked on the way out!)

Instead I spent the time at the Nasher frantic that my car was being ticketed. It seems like a really interesting museum—I accidentally walked into their regular display, and it looks fascinating (even though the lead picture is a portrait of a guy wearing a Superman tee shirt. I'm sorry, but is there something non-artistic about a WONDER WOMAN tee?), but skipped it because I WAS VERY LIKELY BEING TICKETED!!!

Turned around and there was the entrance to the "Collecting Matisse and Modern Masters" (Cone Sisters) exhibit. Now, I'm not a fan of Matisse. Oh, about 10% of his stuff I can say is interesting, maybe even nice, but the rest leaves me cold. It looks unorganized and slap-dash. (The lady next to me in line said the same thing, so I'm not weird). What I was hoping for was a sudden enlightenment like when I'd gone to Montreal's big art museum. The exhibit there had been impressionist landscapes or somesuch. I'd come around a corner, turned, and there was a landscape by Cézanne.

You must realize that the only time I'd previously encountered Cézanne (must have slept during that particular class) was my college Art History textbook. There was a 1x2" black and white Cézanne landscape in it that I looked at and asked, "What's all the fuss about? If I had a three-year-old, she could ..." Well, you get the gist.

But I turned and there, at eye level and one foot away from me in full color, was a landscape that was literally breath-taking. And it was Cézanne. Since then I've come to find more of his landscapes and seen the mystery and delight in them. And his still lifes are just... Well, they're just! Woof.

So I was hoping I would gain some appreciation for Matisse.

For me he follows Sturgeon's Law: 90% of everything is crap. But the 10% is very nice indeed.

And there were other painters represented with single paintings (or multiple, in Picasso's case. For me, Picasso is more 50/50 than 10/90). I saw one painting from afar, said, "Ah ha! My Matisse breakthrough! He's doing something different here." Got closer. "It must be an early work, because he's trying to mimic VanGogh." Closer. "He's doing an excellent job. What a great painting!"

Of course it was VanGogh for real. Gorgeous. Glorious. Amazing. Siiiigh.

There was also a Gauguin that knocked my socks off, as well as Courbet and another guy whose name I can't remember. And oh yeah, Picasso had a good one in the show, along with a bunch of other stuff of his.

And there was an interactive video of the Cone Sisters' apartments, showing room after room CRAMMED with artwork! "Just look at all that lovely wall display area!" I was so jealous!

The show book was $35. Pass. Though I'd love to have those color plates of VanGogh, Courbet, Picasso, and WhatshisfacebeginswithanR.

But I had to hurry out of the show, past the mammoth line that was snaking through the lobby. ("What?!" "What?!") After all, THEY WERE GOING TO GIVE ME A PARKING TICKET!!! I raced down the stairs, hoping to avoid the Dook Cops.

At the bottom of all the stairs, behind the ticket information info, stood a bulky something, wrapped in a brown trash bag. If you peered hard, you could see the word "PARKING" inside there. A small sign had been taped to the bag: "Paid parking is not in effect today."

RRRR!! I could have taken my time, maybe even enjoyed the show instead of worrying. Perhaps I could have explored the rest of the museum, bought the show book since I didn't have to pay any fines.

As I approached my car, keys in hand, I noticed an SUV that had been slowly cruising come to a halt. The driver and passengers were throwing their hands up in the air, giving shouts of joy. I nodded to them, got in, and departed so they could take my space.

Stoopid Dook Nasher. Still, I'll have to check them out later, if only to see if there's a Wonder Woman tee shirt somewhere in there.

Posted by Carol A. Strickland at 9:35 PM