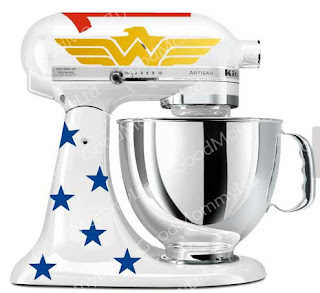 Etsy's "Good Mommy Ltd" has kindly donated a Wonder Woman decal set, suitable for your kitchen mixer. It's made for white mixers and has a metallic =w= with blue stars. This contest will run THROUGH July 4th. Just comment on this blog or on my Facebook page or Pro page to be entered to win! If you can't wait, go to Good Mommy's site and order your own now. (They're available for different colors of mixers.) Put some WONDER into your cuisine! 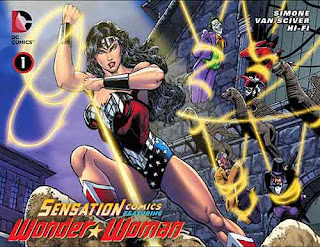 I have mixed feelings about this issue(s), even if it was published as something to go up against the supposed “Wonder Woman” of the nu52.

I award it a zillion points for that alone.

The title was designed to be “continuity-free.” Reading it, it seems to be aimed at a very young audience, though it’s rated T for Teen and Two-Face gets slice-n-diced on-panel. It was created to be digital first (for the most part), and appeared in my Comixology file in half-page format. Lord knows what the published version looked like, because I didn’t get that. The issue isn’t even dated, other than by year.

“Gothamazon” is one of those stories that show us how like/unlike Wonder Woman is to Batman. We got a story arc like this in WW 2nd series #164-167, “Gods of Gotham,” in which WW’s and Bats’ casts were lined up and compared to each other. “See? Wonder Woman is JUST like Batman!” (No, she ISN’T!) (Though that story was miles better than this one, I hate to say.) Then there was Paul Kupperberg’s kiddie book, Dr. Psycho’s Circus of Crime, which I’ll admit isn’t a Batman comparison, but does hold the unspeakable crime of having Dr. Psycho disguised as a clown—who looks just like Joker. Really, Paul? Wondie’s villains can’t stand on their own?

And here we have this. The villains of Gotham (some of them seemingly straight out of the TV show, to judge from their dialogue) have worked together to kill all the Bat family. We see the huge explosion; we know this story is out of continuity. They’re DEAD, Jim. At this point Oracle (yay! She’s back!), who wasn’t caught in the explosion, considers her choices for keeping Gotham in order and she chooses WW. “This is war,” she knows.

We see panels of the chaos erupting in Gotham. One of them shows two Zatannas as villains carrying bazookas. What’s that about? HellifIknow. But Joker leads the main villain group, who work together very well for some unexplained (because comics) reason.

Superwo… I mean, Wonder Woman walks through a flaming inferno, unscathed, to impress the bad guys with her machismo. She uses Wonderangs, a “W” version of the Batarang. (Oracle had told her to use “Gotham solutions.” Why?) (Diana’s thoughts reveal that “[Amazons] INVENTED ‘Gotham solutions.’”)

Diana is unimpressed with Gotham’s situation but easily falls for Two-Face’s obvious treachery. The invulnerable heroine is not harmed by Mr. Freeze’s weaponry but uses Bullets & Bracelets to stave off some of his blasts.

Though she was unimpressed, we discover that Diana’s brought an Amazon army to Gotham. The Penguin blows up… something, turning the scene into a rescue mission as civilians seem to need rescuing. Perhaps it was an apartment building of some kind. Diana says, “No. Not even ARES would—“

We’re talking Ares, god of war, here, right? The guy who stands behind genocides. But this is something he wouldn’t do. Did I miss something?

Diana muses, “It took them five minutes to learn my weakness.” What, that she rescues victims? Don’t all superheroes do that? She muses about the Greatness of Batman, that he doesn’t turn dark like his nemeses.

Speaking of which, Diana thinks, "Oh, Bruce. But you do have the most EXCELLENT nemeses." From which I assume we are supposed to surmise that Diana doesn't. I beg to differ.

Oracle Bat-splains to WW that in order to win, she must think like Batman. Really? Wonder Woman hasn’t established her own prowess enough? Catwoman and Harley Quinn overhear the radio message (how?), and I wonder why Catwoman hadn’t been taken out with the Batses. Diana finds their trademark witty repartee to be baiting, but instead enlists them to her side, to which they quickly come. She calls them “girl-children.” ?? Aren’t girls children already?

Ironically, Diana’s thoughts turn dark. Perhaps this effect is caused by her costume going through variations from panel to panel. That would do it for me.

Diana enjoys misleading fantasies in which she utterly destroys her enemies. One of the situations show her taking her sword to slice Two-Face vertically and bloodlessly. (Speaking of that sword, it suddenly appears from nowhere for a few panels ranging from Diana’s imagination to reality, only to disappear for the rest of the story. We also don’t see the Wonderangs after that one sequence.) Then she says, “No. I will remain Diana.” Yeah, Di. Why would such even enter your mind, if it’s not the way you’d think?

She now goes after the villains, quickly (! It takes her two panels to accomplish what Batman has been working 75 years to accomplish!) dispatching them and wrapping them in her lasso. It reveals the hidden fears of the villains. Oracle later reports that “some of the villains she touched went to rehab, and a couple even went straight entirely.”

Later we see that somehow Batman has not only survived his apparent death, but is back on the job. From afar, we learn he approves of WW. “A little.” Golly.

It’s a heavy-handed, jerky and rushed-seeming storyline with pretentious everything, not one of Simone’s finer hours or even mediocre ones. Van Sciver’s artwork held some really nice panels, some really so-so ones, and in places the action wasn’t clear as to what was going on. (I blame this more on the script, though.) Don’t know why he chose to have the costume morph all the time.

What was the purpose of this story? How was it suppposed to showcase Diana in this, the first issue of her new title? It kept invoking Batman instead, and Diana’s character/abilities (and costume) seemed to change from page to page. 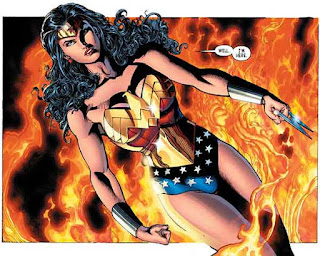 This is a very simple WW vs Circe (ack! Undefined magick! Alert! Alert! I hate undefined magicks) story, set in Washington. The costume used is a baggy version of the ElectraWoman/nuDC version, though who knows which WW this is inside the thing. Diana is able to flex and throw off silver streamers that seem to be some kind of (binding?) spell.

There’s nothing new here except the artwork. I feel for the artist. She’s trying to be very avant-garde, but a lot comes off as awkward, blobby and even amateurish. It's not consistent in style. Gold star for experimentation, because she was obviously trying hard. Not so much for the actual execution.

To make things worse, we get an epilogue that clumsily informs us that it’s all right for boys to like Wonder Woman. Golly! 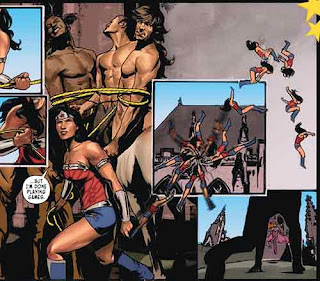 In keeping with the nu52, WW’s presence all through this book is only valuable if males approve. Even Oracle is presented as a tool of Batman and not as Oracle herself. She lives to serve him.

I think a solid edit of all the material could have improved things muchly, especially if the editor had encouraged Deibert to try something original in her story. If this is indeed aimed at young kids, well, most don’t like being talked down to. Check back to the Silver Age, where readers could enjoy simple but interesting stories across DC’s line and in which people were very rarely hacked up on-panel.

A disappointing beginning, but we'll get a very nice issue next time!

So, what did you think about this issue?