All this will likely not be in order unless I really check the numbers on the photos or the tour description. These are days 5-6 of the tour, plus a bit of #7. 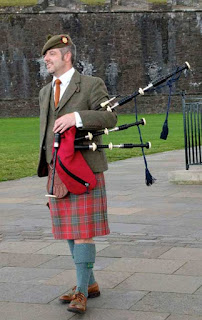 Speaking of photos, let's begin with a nice one. I believe this gentleman's name was Kevin MacDonald, and we met him when we visited Stirling Castle. Well, not quite Stirling Castle. (Part of some of the oddities of the Trafalgar Tour were that they were more interested in timetables than touring, and touring Stirling Castle was something our schedule couldn't fit in, though we were RIGHT THERE.)

We were going to eat as a group in a restaurant just next to Stirling. Kevin met us and, after letting most of the ladies in our group have their pictures taken with him, gave a little talk about the place and how it was connected with William Wallace (the Battle of Stirling Bridge and the Battle of Bannockburn, both so emphasized in that British History for Dummies book I'd read. Hillary waved in the general direction of the countryside as we drove back down the mount. The historic sites were somewhere out there), and then walked us down to the restaurant, playing the bagpipe. 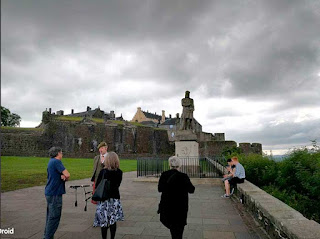 After we'd eaten, here came Kevin into our cramped parlor and began to play the bagpipes! It was EXCRUCIATINGLY LOUD!!! I dug into my purse for the ear plugs I'd brought for use on the plane over, but those plugs -- even with Amazon top-ratings -- did little to dim the sound. The poor people sitting even closer than me were holding their ears, except for the ones who were wasted.

After that he gave a bio of Rabby Burns and then recited a lengthy if edited version of "Tam o'Shanter," chewing every bit of scenery he could. Tremendous!

I was disappointed that we couldn't see the William Wallace memorial up close (it was visible on its hilltop a bit away from us), but also was curious to see the statue of him done up as Mel Gibson in Braveheart. But according to all-knowing Wiki: "The statue was deeply unpopular, being described as 'among the most loathed pieces of public art in Scotland' and was regularly vandalized before being placed in a cage to prevent further damage. Plans to expand the visitor centre [at the memorial], including a new restaurant and reception, led to the unpopular statue's removal in 2008."
Back to the beginning of Day #5...

St. Andrews was just above Edinburgh, and it was not only raining but thundering as we drove through. We stopped at the clubhouse of the historic golf course. You could see the North Sea just over there. I wanted to run over just to dip my toes into it to say I had been there, but I'm a good North Carolina girl and here if we're on a golf course and we hear thunder, we head inside. Even so, I think NC is #2 in the US for people getting hit by lightning. 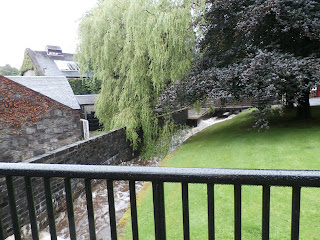 We visited a whisky manufacturer, a family-run affair. Because of the rain, the stream that ran the equipment was threatening to overflow, but it made for pretty pictures. The process was interesting enough, and at the end they gave everyone but me drinks for a toast, and then led us into their little shop for large purchase and small. (Of course I ran into sharp criticism again about not drinking.)

These were terribly, terribly narrow country roads we were traveling. We SQUEEZED through a few turns in the middle of nowhere, and on occasion gave Paul, our driver, a round of applause for accomplishing the seemingly impossible. We visited a farm (actually, this was after Gretna Green, but I'm going to leave it here) for supposedly lunch, and discovered it was actually just tea. No one else thought the food was anything but good, but I thought it was pretty awful. I just hated to think that because the lady had made it herself. But this is her business: to feed the tourists as they come around. They served 1"-wide ribbons (no crust) of "sandwiches" with white bread, mayo and cheese, and maybe one kind had a few morsels of chicken on it. Then there were little finger desserts that didn't taste like anything except sugar. At least the tea was good.

Speaking of tea, the place had two outdoor toilets, looking like overgrown portalets. We made a line, and I was second in for the one on the right. The guy who went in ahead of me couldn't keep the door shut, so I made sure I shut it well when I went in. What had been his problem? I locked it because you go in such a thing, you lock it. Did my business, went to unlock the door… And it wouldn't unlock!

I WAS LOCKED IN THE LOO! 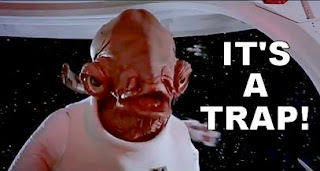 I WAS GOING TO DIE IN A LOO!

I turned that knob every which way I could, and shouted at the people outside of my situation. They shouted back instructions on how to unlock. Finally, after doing the same thing I'd been doing, the door unlocked. Whew! Of course no one else had any problems with it.

Must have been gremlins, I tell you.
Somewhere in here we arrived at the Commando Memorial at Spean Bridge. The statue of the Green Berets that trained in the area during WWII faces Ben Nevis, which is the UK's highest mountain and was unfortunately socked in with clouds so we couldn't see it.

Eventually the sun came out and we wound up around Fort William or thereabouts, where we had time enough to find a very nice lunch. (British food is fairly fine as long as you're allowed to look for a good place yourself, though veggies were still rare.) Fort William was charming, and we took a look at the Caledonian Canal, which stretches 60 miles from Loch Linnhe in the southwest to Inverness, on a bay of the North Sea. 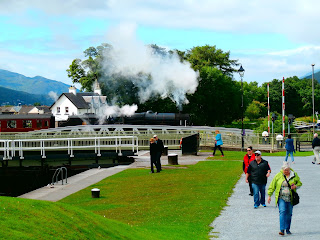 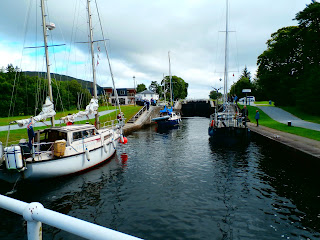 We went to Neptune's Staircase, which is a series of nine locks. There was a Hogwarts-type railroad running nearby for the tourists, and the neighboring village was so pretty I asked Hillary how house prices ran in this area. I mean, retirement's not far away. She assured me that homes were sky-high high in those parts. Too bad!

Glencoe is the site of a horrible massacre. My book and our tourist guide said it was another Highland clan, the Campbells, who killed the MacDonalds on orders from the new king. Yet I just watched a TV travelogue that said it was "redcoats" what done it. Well, check out the Wiki version, which seems a little of both. 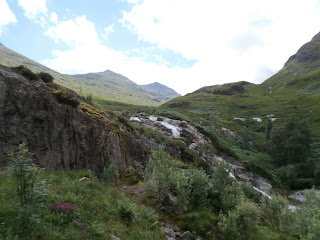 But Glencoe itself is a lovely valley and then you drive into this GORGEOUS country of very high hills and waterfalls and people hiking everywhere! It's absolutely fabulous. I think it even has some hot springs. It made even me want to get off the bus, don some sturdy boots and my walking stick, and start strolling!

The other side of the mountains is pretty dreary, though.


From there we visited Loch Lomond, where we had a nice boat tour of the lake. Lovely high hills lead down into it, and I think that one side, which houses an older hotel, isn't served by regular roads. Our captain named a couple movies that had been made in the area, with scenes shot at the waterfall beside the hotel. I wasn't familiar with them. 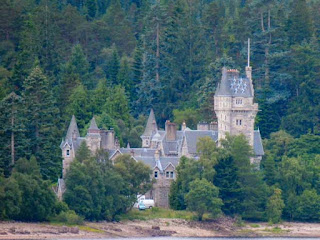 Along a narrow local highway somewhere during this time the bus stopped so we could carefully troop out to a lake's edge and take some shots of Ardverikie Castle, which was used (among other media) in the BBC's Monarch of the Glen as Glenbogle. I'll have to check Netflix to see if it's available there. 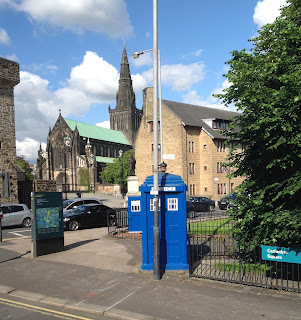 Let's see. Stirling is close to Glasgow, so we must have taken those in that order. Glasgow had an interesting downtown in that any city's downtown is interesting, but I don't recall that much about it except that Robert almost got lost again, 70 feet from the bus. Hm. I think it was there that I saw the TARDIS.

Jedburgh: We got about 20 minutes to use the bathroom and check out the ruined abbey there, which we couldn't go into because it cost money (and time).

Finally in Scotland was Gretna Green, which I was really looking forward to. I read a LOT of Regency romances, and people in those are always trotting off to Gretna Green, which was just north of the border, to be married when they can't find a way to get married down London-way. In Gretna you could just show up at, say, a blacksmith's forge and he'd marry you off as long as you could scrounge up some witnesses. Scottish law allowed it.

I was expecting a South of the Border-type tourist display, full of gaudy goodness. Gretna Green: North of the Border! (Pedro -- yes, I know he's completely un-PC, but his billboards are everywhere up and down I-95 -- is in South Carolina, just across the NC line.) Instead we visited a sedate shopping complex with a mousy museum (which you had to pay extra for) at the end. Nothing was worth taking a picture. I'm afraid what impressed me most about the place was the ladies' room.

You see, I'd been trying out black pudding that morning and the one before. "This is really, really bland sausage," I decided. My body hates sausage, but this seemed safe enough. Day #2 and my body rebelled. Quite suddenly. "Which way's the bathroom?" I yelled as we pulled into the parking space and I jumped off the bus.

The rest room must have had thirty-five stalls. No waiting! Afterward, I thought it was funny because Gretna would be a very female-centric place, so it was good they accommodated them.

Which reminds me: we stopped at one "service" (they call rest stops "service" on highway signs) that had a good 18 parking slots for buses. Inside the travel plaza was a number of fast-food restaurants, two Starbucks (I kid you not) (one was a regular Starbucks place and the other was hot drinks only), another brand coffee cafe, the ubiquitous video parlor, a travel electronics store… and a ladies' room that must have had sixty stalls! There was a guy inside helping a female employee direct traffic. (Signs warned of his presence.) For that one you had to wait, but the line moved VERY quickly thanks to the loo cops.

Speaking of bathrooms, and this blog seems inordinately obsessed with them (as one is when on a bus trip), I discovered a new system of toilet paper dispensing: like those small, square kleenex boxes, only on its side, affixed to a stall wall. You pluck one sheet at a time. You know something? I think it makes a LOT of sense, especially in a public venue, as it keeps things neater than usual.

ALL public bathrooms in the UK used those air dryers. I thought Mythbusters had proven that paper towels were more hygienic?

My point? What was my point? Oh, right: Gretna Green needs to be more showy. As in: show a little tastelessness! Have some fun with the concept!
And that was Scotland. Darn my note-taking anyway! I know I missed some good stuff, but hopefully have made up for it with pics.

Next: Back to England and then… London!