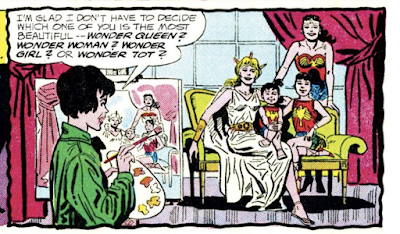 Wonder Woman #123 (July 1961) is the first appearance of Wonder Girl, aka Donna Troy. Her creators were Robert Kanigher and the art team of Andru & Esposito.
Posted by Carol A. Strickland at 9:44 AM

I agree 💯 percent with you!I consider Wonder Woman #123(first series) as the 1st appearance of Donna Troy. Furthermore, Wonder Girl was created by Robert Kanigher, Andru and Esposito. The Wonder Girl whom appeared from #123-165 was Donna Troy. The one that appear in Wonder Woman #105-121 is Diana as a young girl. You can tell the difference in the costume and hairstyles. Thanks for creating this blog and for giving fans the true origin of Wonder Girl aka Donna Troy.