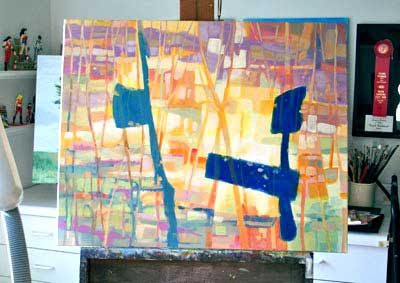 When can you tell you're finished with creating something? I've called it quits for the day... for the week, rather, on the abstract. It's looking a helluva lot better than it did last week, and even more so than that than it did Friday, but still... Well, you can tell it's a sunrise or perhaps sunset through the woods, and that's what the intent was.

Too bad it doesn't hit me yet as being done.

(Maybe that's because I haven't followed through on my two dominant kinds of shapes. Hm and aha!)

Speaking of done, I thought I'd hit one of my goals this week by entering an art contest. I got everything all formatted the way they said they wanted an e-entry done for the North Light cover contest and started filling out the entry form. A line at the bottom caught my eye: "Contest is closed for entries."

Checking closer, I saw that the deadline was not Jan. 31st, but to be done BY Jan. 31st, which meant the 30th.

Missed it by THAT much! Oh well, there's still all the contests in "International Artist" to enter, what the hey.

I've been reading a manuscript by an e-columnist about superheroines and finally completed that. I sent him comments and darn it all, he commented back, so I've got to do some research on one question in particular to get back to him with. Ending a sentence with a preposition, yeah, I know. Anyway, if you'd like to help I've posted the same question on the DCMBs under BoP and GA/BC because it's a Black Canary question.

This author claims that by the start of BoP "Black Canary had been the strident 70’s feminist heroine who was now burned out on the whole superhero scene." I told him that I didn't recall her being strident about anything having to do with feminism in the Seventies. The only thing strident about her was her Canary cry. She was merely GA's arm candy.
Would anyone here like to comment?

And this guy is listening to me? The author is obviously not like me. When my crit partners made comments about my stuff (though it was fiction, as opposed to this book) I would take into account quite heavily who was giving me the comment. Some crit partners I'd silently but instantly dismiss unless someone else in the group echoed the sentiment. However, if two null partners said the same thing, I gave the section in question a second look.

Is that absolutely awful of me or is it merely a show of efficiency? Just to pay attention to the ones whose opinions I've found usually to be significant, that is. Oh, don't tell me; I know. I'm extremely opinionated. And I don't give a darn that others think so. (I am completely baffled by those who can't make up their own minds about even the simplest of things!) (Though up at least until now I have restrained myself from slapping silly any of them in the hopes that that would snap them to their senses.)

On my to-do list I also have several indexes that a kind gentleman has sent me in hopes that I'll post them on my WW website, listings of Amazon appearances across the DCU and such. I'm going to try to wade through those this week so I can free up my desk for writing my own stuff. I think readers will find it helpful in their own research projects. Just hope I can make it all purty and legible and such.

Trying to finish up all these projects so I can move on to others and raise my writing up to Project #1 again! I've got goals to hit. I was going to go to Atlanta in March for a plotting weekend but have decided to stay home instead because I already know how to plot. Why waste my time in a workshop (though I've heard it's an extremely good one) when I could be doing the preliminary plotwork on my next two books?

Hope you all are progressing on projects of your own.