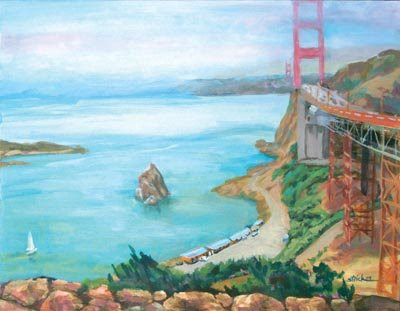 Whew! Took a couple days off to get some things done that I hadn't managed to do during Memorial Day, and finally got to finish this picture.

I went to San Fran last year (took an extra day to tour after RWA Nationals) and snapped pictures of the Golden Gate from the lookout point across from the city. If you've been to SF, you've been there; you know where I'm talking about.

Last November at the Art of the Carolinas in Raleigh, I took a "Painting Water" course from Sean Dye. I was interested in learning more about acrylics, and knew that Sean teaches a good class. Unfortunately, it was also the largest class he'd taught, and by the time we got to our second "walk around and see what everyone's doing" break, class was almost up and Sean hadn't really gotten to the part about painting water. Sigh.

Anyway, the picture had been sitting in my studio and often on the easel for me to finish it. Finally did. I think. It may have to sit around some to get some final nips and tucks. Not sure if the value pattern is quite right yet.

The real b-word about paintings is: selling them. I've tried eBay. Doesn't work unless you're putting through some real cheap stuff. There are thousands of paintings—a lot of them terrific—on eBay that never sell.

I don't have a partner with whom I can attend street fairs. You need a partner for bathroom breaks and such.

I've sold two paintings at a local restaurant (shoutout to the Saratoga Grill!!!). Two out of six paintings isn't bad at all.

Now I'm thinking about local auctions. I've asked a few auctioneers and they say they don't accept minimums, but will sell a painting at what they think is a fair price. Am I supposed to trust them in this? I've seen too many auctioneers get tired/bored and let things go for practically nothing, just so they can move on to a part of the auction that they're interested in.

Still, there seem to be a few auction places in the area that specialize in higher-end stuff and art auctions. I'll be trying them. And local galleries.

And of course there's selling on the Internet. I have to wonder at what kind of traffic a lot of these sites handle. One person a month? Five hundred an hour?

How would you approach selling paintings? I need all the advice I can get!
Posted by Carol A. Strickland at 1:19 PM

Have you tried Etsy? I know they are good for crafty things. I'm not quite sure about paintings, though. Beautiful painting! I love it.

Thanks! I've signed up for Etsy, but this is one of those sites that I wonder how much traffic it truly gets.

Uh, well, just from me, Etsy gets more business than my poor weeping credit card can stand. ;)

Hm! Thanks for that extra tip! (Say, aren't your walls a little too bare? Hint!) (I have no shame.)

Totally send me your info on your Etsy shop, or wherever you decide to set up. I love buying stuff from people I know!