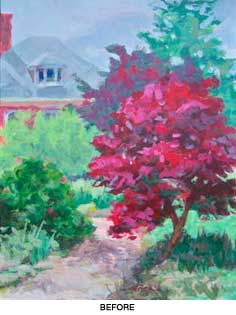 Last spring I entered the Raleigh Paint Out, in which we arteests trooped outdoors on an assigned day to an assigned neighborhood, and painted. Pictures were due framed and ready to hang by day's end.

I chose a winding path in Fred Fletcher Park with pretty red maples in view. My goals for this picture were to simplify a composition, to really change nature (something I've not had the guts to do before), and to work with a more structured color idea.

Well, between the threatening rain, occasional gusts of wind, and the sheer, hair-raising, adrenaline-pumping terror that comes from having such a daunting deadline, I created the above picture. The two red maples were farther along the path, and I moved them closer to me. The farther one I tried to use to frame the closer one so it could be the focus.

I got the gist of the place down, and at the last minute made some major color/value changes that improved the image. But still I anxiously awaited the time when I could retrieve the painting and redo it a bit.

After much staring and pondering and sleeping on it (rather a lot of that last bit), I sat down last weekend and did this: 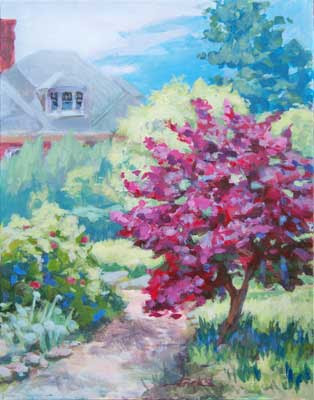 Gone is the second red maple, to become part of what I hope is a more simplified background of foliage, still framing the red maple. I tried and tried to add highlights to that maple, but in studying the ones in my daily landscape, I've come to the conclusion that red maples don't do highlights well. They're dark. So putting light foliage behind it was imho the best solution.

I saw some paintings that fearlessly used pure color in the landscape, and so added swooshes of fairly pure cobalt blue (which is a green-tipped kind of blue) to shadows and the sky. The blue almost makes this a triadic color scheme: red, yellow, blue. But not quite.

The painting sat another two days after I wrote this, and what you see is the final version, with the ribbon of shadow broken up into a more interesting shape. With what I've learned, maybe my next plein air painting will find its way more efficiently than this one did.
Posted by Carol A. Strickland at 10:33 AM