The Lazy Daze of Cary

Despite me living in this area for so long, I've never been to Cary's Lazy Daze street fair. I usually find out about it the Monday afterward. So this year I made a note on my calendar to hit Lazy Daze, if for no other reason than to do some art marketing research.

I wanted to see what other artists were doing. How they did their booths, how they interacted with their customers, what their prices were.

Temps were supposed to be quite reasonable and humidity low. Guess what? They changed their forecast at the last minute. Like I didn't see THAT coming.

So with the Mapquest directions by my side, I took off for Cary. Cary's a strange city, once you get away from the center of the town, which dates far back, maybe even to the Sixties. Get a few blocks from there and everything starts to look the same. Same corner strip malls, same divided boulevards, same sidewalks.

It's easy to get lost in Cary. One section of the town looks exactly like the others. It's all recent construction, and the condos and homes all look the same. And all look expensive. That's because Cary folks, on average, have a lot of bucks in their bank accounts. They all work (or used to work) in the Research Triangle.

Cary's a very green-looking town. There are lots of trees everywhere. That's how I missed spotting Cary Towne Center, a huge shopping center. Though I passed right by it, there was a thick belt of trees surrounding the place. I knew I must be near because the streets hadn't gone to two laners yet and I knew that if I went any further, I'd be downtown.

So I made a few turns and eventually through the brush spotted a "Cary Towne Center" sign. I turned in. The news had said that a free shuttle would run from the shopping center near Sears every 15 minutes. So I drove, looking for Sears. And drove. And drove. The drive circled around and my sense of direction, which was already uncertain, became completely confused. But there was Sears!

And every darned parking space for miles was taken. Pedestrians were strolling away from Sears, probably toward the tiny shuttle. I figured on a 3-hour wait for the bus.

So I cruised the lot. Finally I spotted a woman with baby carrier heading away from Sears toward the cars. I headed out, down one aisle, and then back in to where she must be targeting her car.

Though the aisles were one-way and clearly marked, I spotted a big-ass SUV turn into the end of the lane against the traffic direction. It stopped feet away from the woman and its turn signal began to blink.

You must be joking. This SUV woman (we'll call her "The B") would have to back into the space once the other woman pulled out, if the other woman could get around her to exit. But the lady was taking her sweet time opening up her trunk, much less seeing to her bags and kid. This looked to be a twenty-minute load-up.

So I gave up on the space. How to get out? There were five cars behind me. WE were all pointed in the correct direction. I waved The B back and she shrugged at me. Then I inched forward. Reluctantly she moved her car over. I inched up. There wasn't enough room to pass her. She shrugged again.

"Idiot!" I bellowed at her, practically nose-to-nose through my closed window (and her open one). She managed to move over a few more inches and I (nearly) scraped by.

I do hope that when the lady with the kid finally got out of her space, that someone behind me would move in and take it, leaving The B sitting there backwards. Rrr!

Anyway, found a spot, found a bathroom in the mall, and then headed for the shuttle bus. Instead of just one, I counted four long tour coaches and two shuttle buses waiting for people. They filled up quickly, ferried us downtown, and disgorged us at the beginning of the fair.

The streets surrounding the site were crammed with parked cars. Every house that had an accessible lawn had cars parked on it. Everyone had their signs out: "Parking: $5.00." One corner across from the beginning of the fair had not only cars parked all over their once-beautiful lawn, but the owner had also put out paintings and plants for sale, along with bottled water for $1. Very enterprising! 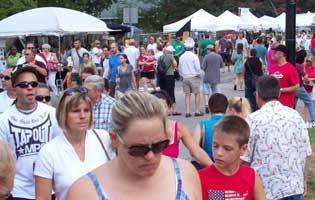 Unlike the ridiculous "August is Too Damn Hot to Hold a Street Fair Street Fair" I went to in Mebane a couple weeks previously, a fair that had six tents and perhaps fifty visitors (including the tent holders), Lazy Daze took up, oh, maybe seven or ten blocks. It was crammed on both sides with 10x10' tents. There was a long row of various arts organizations—I had no idea so much was going on there! Then we had block after block of artisans. I think everything was juried, because there were only a couple of clunkers in the entire group.

And there were about fifty million people attending. Check the guy on the left in the pic above, the one with his tongue hanging out. He's right. It was HOT.

Off on side streets were kiddie areas, misting tents, and food vendors. I got a $2 smoothie for $5. Was tempted by a cute silver sugar bowl on a stick (a bird feeder), but didn't feel like paying $35 that I didn't have anyway. Saw some lovely artwork. Left my card at one booth because the artist had stepped away and I wanted to ask her if she gave lessons in watercolor. Gorgeous stuff. She lives in VA, so...

Bonanza! Some guy was selling portraits. He specialized in pastels but also worked in oils, and he had a stack of copies of HIS PRICE SHEET. My portraits are on the same quality level as his, but a good level less expensive. As I walked the fair looking at other paintings similar in quality to mine, I came away with the impression that my stuff is priced right. Yeah, there was the one woman who had $2500 paintings that I'd have charged about $700 for, but she was the exception to the rule.

Saw Chris Hohmann, the weather guy from Channel 11, there as I was registering for a chance to win an iPad. On TV he looks like a, well, regular guy. In person he's TINY!!! Skinny and short, but pleasant-looking all the same. I requested that he desist from standing in front of Efland when he worked the green screen.

Saw a woman painted completely in metallic silver and dressed like a Revolutionary woman soldier (skirt hitting her knees). At least I recall it that way. It was uniform-y, Revolution-y, and yet had a feminine touch, with the overall effect that she was a metal statue. Yeah, I should have taken a pic, but I still had my camera in my purse and the crowd was shoulder-to-shoulder. I think the concept was that every time someone threw money into the pot in front of her, she'd come to life and rattle off a bit on her snare drum. She seemed really good, and I never saw her sweat, though she was standing when I passed her going one direction, and still in position a long time later when I was in retreat mode.

Halfway through, the heat began to get to me. I saw a few people being attended to by aid workers, and was glad I wasn't one of them. Didn't know I had that many sweat glands in my head, though. 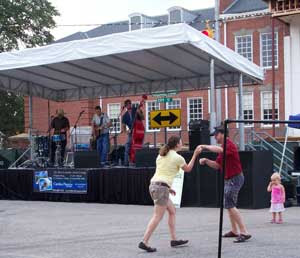 Passed a very good Cajun/bluegrass/soft rock band on my way back. Only one couple was dancing, though the band gave a very lively, danceable beat. Stayed to hear three songs from them.

No probs getting the bus on the way back, except that they miscounted and I had to wait a few minutes to grab the next one. At any one time there were usually two or three buses loading. The bus personnel and town volunteers were very polite and helpful all the time.

Hit the mall for a gyro to take home (wasn't about to pay Fair prices for food! I'd only budgeted for the one smoothie) and recalled what the one lady had told me on how to get out of town. Turned out she was right. Zzzzip! Home again, home again.

A very nice street fair. I'll return next year. Now, let's see if we can get Chapel Hill to reinstate Apple Chill Fair...
Posted by Carol A. Strickland at 5:18 PM

I've been to Lazy Daze but it was years ago. I'm too afraid of losing the kids in the crowd to go right now.

Medium-sized kids (who don't listen to their mother and love to run ahead) and large crowds don't mix.

Glad you had a good time.

BTW on your expense of house comment....Cary is known as the Containment Area for Relocated Yankees for a reason. :)