I sing the feline electric 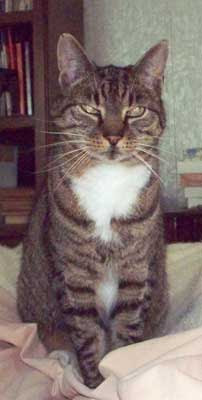 
Bran was the kitten who never grew up. Oh, he got older, but he was always ready for action, always prepared to create a little deviltry. His little motor was permanently set on extra-loud purr. Vets had to blow in his face to get him to shut up so they could listen to his heart.

When I first got Bran from the shelter I thought he'd be Branstookah, reborn. I was wrong. He was actually someone from Obiwan's past. Bran worshipped his older brother. I have lots of folders of pictures labelled "Bran and Obi," and few labelled just one or the other.

I'd been hoping Bran would be a pal to Bella, who was now without her beloved Morgan, but Bella wouldn't have anything to do with him. So I went out seeking a buddy for Bran and found Molly. It turned out she was probably a week younger than what her owners said, still a little too young for adoption, and when I got her home she was much smaller than Bran. I'd thought I'd gotten a like-sized kitten. 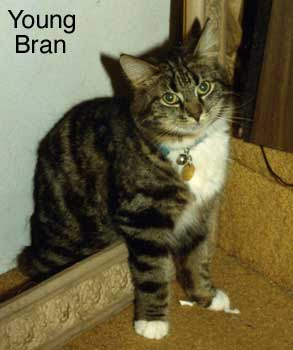 So Bran, in his exuberance, terrorized her. He was always trying to play rough and she could only try to hide—until she got older and grew larger than little Bran. She would hiss at him like crazy, but still he'd try to play. They both might not like to admit it, but they had a lot of kitten adventures together. And since Molly idolized Obi as well, they were the Three Musketeers when he was around.

When I moved to the new house I also had to move seven cats. I stuffed 'em all (except the timid, much-put-upon Bella) into the master bathroom and closed the door so the movers could come in, so I could keep track of them, etc. But when I turned my back, Bran—always the smallest—had slipped UNDER the door and zipped out into the strange yard.

I almost freaked out. There was no knowing how far he would run, confused not to be in the home he'd known all his life. So carefully I walked toward him, trying not to frighten him. He stood in the middle of the forest and meowed at me piteously, then came to me. He knew who his Mama was. 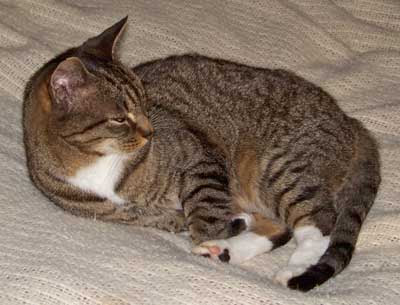 As the herd dwindled down to two, Bran's bond with Obi deepened. The two were inseparable, except when Obi got jealous. On the rare times when Bran wanted to be petted NOW, Obi would either slink away in a huff or nudge him out of the way.

Bran liked to go out at night and come back in when he thought breakfast should be served, so I got used to Obi changing sides of the bed. He'd try to be on my left by the pillow, but when Bran came in and jumped to that spot as well, thinking nothing about two cats piled on the same point (it just made things friendlier, didn't it?), Obi would move to the right. It got to be such a routine that Obi eventually changed places in the middle of the night so as not to be bothered in the morning. Bran would come in, purr purr purr (the loudest purr you've ever heard) (except that Moosie, on the rare times he purred, was louder), and then pat me gently on the nose or eyeball to inform me that it was breakfast time.

At night he had an uncanny sense of time. As I sat at the computer, pretending to write my novels, he'd come in at 8 and start patting my leg, proceeding to a scratch if I did not accede to his wishes, and scratch and scratch until I got up and distributed snackies like a good Mama does.

I often called him "my little Duck," because he loved the rain. The worse the storm, the more he wanted to go out. And of course if Mama was home, he'd skip the kitty door and sit at the front door, looking back at me, awaiting valet service from his human. Once out, he'd give a quick look around and race down to sit under the back of my car. (Unless I saw him inside before I left for work, I always slapped the back of the car to flush him out of the way.) Don't know how he accomplished it, but even in the worst of storms Bran would come back inside without a drop of water on him. Usually. Every so often he'd arrive drenched, and kick up a fuss when Mama toweled him off. 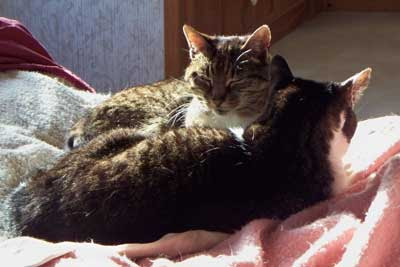 As Obi's health has declined (he's 18 now), I've worried a LOT about Bran. What would Bran do when Obi was gone? Would he be sentenced to long, lingering years of loneliness? It seems Bran didn't want that. Obi is old enough that he sleeps most of the time, and won't suffer as much, I think, from the separation as Bran would have. 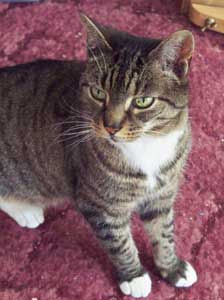 t all went so fast. He'd slowed down in the past six weeks, enough for me to get bloodwork done, especially when he stopped being enthusiastic about his meals. He got more bloodwork last week, just before I left for Art of the Carolinas. When I got back on Saturday, he was not eating to a worrying degree, though he was drinking a lot of water. Then he started to bump into things as if he couldn't see well. His urine had blood in it. He got X-rays Monday morning, ultrasound Tuesday, and on Wednesday he made his last trip to the vet.

I got the impression that he had a huge group of friends waiting to welcome him to the Other Side. When I asked him about his next life, he said that he'd wait for Obi so they could go together. I hope that wherever they wind up, they have a lot of fun, a lot of places to explore, much sunlight to lie in, and much love to surround them. 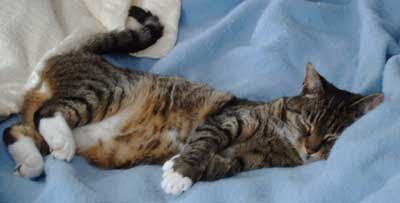 Posted by Carol A. Strickland at 6:38 AM

My condolences. Having lost the last of ours back in February, I understand how it feels -- and the impression that their pals are waiting for them on the other side, to resume their adventures.

I'm so sorry to hear about Bran - this is a lovely tribute to an obviously great kitty.

I know you'll miss him. But he'll be there waiting to play with you again.

Thanks, everyone! It feels so odd to be in a one-cat household. I haven't had that since 1982, and that only lasted a couple weeks. Can't recall what it's like to be in a no-pet house, but that'll come all too soon.

Such lovely words for such a lovely cat. I so know what you mean and sympathise with you. They are after all part of the family.