Rumble in the Wonder—Marketing Smackdown!

This column was originally run January 20, 2010, on comicbookresources.com . 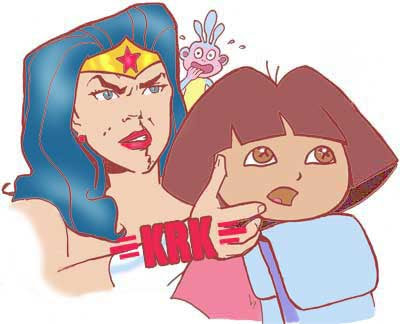 With a "ho ho ho" in my heart and credit cards already smoking in my wallet, I set out in December to fulfill my Angel Tree kid's list. While the Angel Tree doesn't literally exist any more, its spirit lives on as an envelope of holiday wish lists from underprivileged area children.

I'd chosen someone who didn't want a Tour de France-ready bicycle or complete Wii system with snorkel and shotgun add-ons or $300 tennis shoes autographed by Michael Jordan (who, btw, lived in the next college dorm over from mine). (Okay, there's a five-year difference in graduation dates, but even so...)

My young Angel wanted a modest number of modestly priced items requiring both brain cells and motor skills to use. I approved and bought exactly that, but I wanted to add a little something extra to the pile. I was going to get her a gift that would not only help her in her reading, but introduce her to a lovely new world of fantasy and possibilities: a Wonder Woman children's book.

A few years ago Nina Jaffe and Ben Caldwell put out a playful series of Wonder Woman kiddie books through HarperFestival. They're out of print now (why???), but still around in used book stores. I checked 'em out online. Used copies in new condition went for at least $40. Ouch!

So instead, I wandered off to Wally World to get some other kind of Wonder gear for the Angel. Right past the store greeter stood a stand of kiddie "must-haves": cartoon character banks, nightlights, cereals, Band-Aids, toothbrushes, towels, backpacks, etc. Superman, Batman, Spider-Man, Hulk, SpongeBob... and Dora the Explorer.

A double-check of the toy and book sections confirmed the lack of Amazonian presence. Next, I tried the girls clothing department, where I caught a glimpse of a shirt with familiar scrolly logo and star-spangled burst. Hoorah! I made a beeline ("Bees! My god.") for it.

Instead of the Princess of Themyscira, it was a Hannah Montana shirt. Not only Hannah Montana, but a Hannah Montana who had confiscated the typestyle of the original WW logo as well as her TV background starburst pattern. Arrgh! What, doesn't HM make enough money without stealing it from others?

It didn't help that Dora was right beside her, smiling out from a rack of tees with those unnatural mutant eyes. That girl is everywhere!

I have nothing against Dora. She's a fine teaching tool, though the pacing of her stories needs to be speeded up if she wants to grab an Emmy for Best Drama. She teaches a second language almost as well as Rosetta Stone.

Like our Wonder Woman, Dora is kind to all. She's bright and curious. She befriends monkeys. She helps kids empower themselves.

But she ain't Wonder Woman.

I want my Wonder merchandise, and I want it now! Now! Where is it?

(above: The worlds of Bizarro Comics and the DCU both have a multitude of Wonder accessories available to their citizens. How I want that spangled rug!)

Oh, if you're into dollies—I mean action figures—there are a few Wonder Womans around sometimes if you dig far enough behind the displays of male figures. If you see someone running out of a toy store clutching an action figure box to his chest in an attempt to hide it, it's probably because the guy has just burrowed through ten packing boxes of male dolls to find the one WW doll that shipped and wants to avoid desperate WW fans who are willing to ignore peaceful Gaea's Way to get it.

(You can tell these desperate fans by the axes they carry. The "Lord of the Rings" label has been crossed out with a Sharpie, and instead "Wonder Woman" is scrawled there in a red that may or may not be Sharpie ink.)

If you're into sculptures and fancy non-action dolls, there are a few of those as well, produced on occasion by companies who charge gigantor bucks for their limited runs. For some reason, many of these models are loaded to bear with non-standard frou-frous, axes and swords, or a prostitute-ready Wondie suit. Why is this? Does anyone ever see an action figure of Superman that wears trousers? Spider-Man with a gun? Batman in just leather straps and black socks?

Every now and then an inexpensive but nice plastic figure will come out and I'll snap it up. But I want more!

I want to go to a novelty shop and buy a car license plate with holographic stars that says "1DR WMN." I want a purse with a shoulder strap that's actually a golden lasso. I want a Kanga Burger in my Happy Meal, with a Wonder Tot toy on the side. I want a star spangled iPhone with wireless Mental Radio capability. There's an app for that. I want an inflatable, battery-operated Steve Trevor to satisfy all my personal wishes, if you get my drift. I want a bunch of classic songs that tell me not to tug on Wonder Woman's shorts, or that Wondie ain't got a-nothin' on me; or hear a TV show's theme asking Wonder Woman to "saaaaaaave me!" or tell me that some sitcom's lead character is no Wonder Woman.

I want to be able to buy a WW tee shirt off the same everyday store shelf that sells a tee with a big "S" symbol on it. I want pink tees with "S" symbols banned by law and red shirts with =W='s worn instead. I don't want WW school supplies to be so rare that coworkers on vacation in West Virginia run to my cubicle first thing on their return to announce the sighting of a WW notebook at a Target in Bluefield.

Wonder Woman shouldn't be the spotted owl of comic book merchandising. She's an ICON. Non-geek people easily recognize and approve of her. One-half of today's kids are female, and thus presumably in her prime doodad demographic market, though a heck of a lot of males are interested in Wondie as well (for whatever reasons). (See inflatable and battery-powered, above.)

Why are they all being ignored?

Apparently there's a firm line between what's considered girlie stuff and what's not. My Xmas shopping revealed a Lego set packaged in pink plastic and marketed to girls. "All the Legos inside are girl colors," a clerk explained. "Pink, white, purple, orange, yellow..." I'd been aware of the stigma against a perfectly good pink (or as the pink-clad Cosmic Boy once put it, "Pale scarlet"), but hadn't known about the yang-repelling qualities of these other colors.

Guess we won't be hearing the advertising phrase, "These trucks are Amazon tough!" any time soon. Wonder Woman has to overcome the onus of being female before she can market certain things.

Why such a gender gap? Females are still very much thought of as the inferior sex, and anything to do with them is not to be touched by the male of the species. The two genders are kept separated and unequal, else civilization will crumble. Should we be encouraging that antiquated idea? 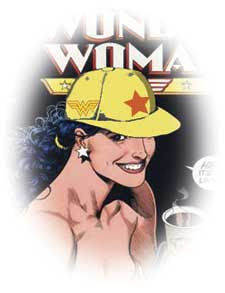 Marketing is not about creating social change, but rather profiting from what's out there already. So here goes: an idea as to how to market Wonder Woman to the hilt in today's world. Given: a nation of couch potatoes. Everyone's up in arms about it: get those lazy kids to exercise! Just don't expect me to get up to help.

DC should consider the marketing possibilities here: Would Superman work? He's from another planet. He automatically has superpowers, even if he lies around all day watching Spike TV and drinking beer. He's no example, no spokesman for health. Batman? Doesn't he get all the marketing already? Time to spread the Bat-Wealth. Besides, he's too cool to exercise. Best to give a kid a Batman video game and pray he doesn't learn anti-social behavior from it as he melds with his couch and decapitates someone onscreen with his virtual Batarang.

But Wonder Woman... Before the Modern Era, she was well-known for citing "Amazon Training" as a source of her power. Surely it involved unleashing the power of the mind as well as the body—just look at what she could do!

But it did involve physical training, which would naturally tie into exercise apparel, equipment, videos and programs of all kinds. Can't you just picture all the star-spangled sweat bands people could wear on wrists and forehead? Any weekend athlete would have fun wearing a yellow baseball cap with a red star front and center. Sweatsuits and gym clothes could be emblazoned with spangles, golden eagles, and red, white and blue. Patriotism, health and the Wonder fantasy, all in one!

Lynda Carter could take a break from her nightclub act to become a spangled gym franchise spokesperson. Be a Wonder Woman at Curves!

The Wii could show you as Wonder Woman (or Warrior) her/himself, as you exercised in a mythological environment. You could take a break from jumping jacks to jog after a criminal or monster, then lasso and reform him. (Possibly through the energetic Dance of Loving Submission.)

The US Army got a lot of air time with their "Be all you can be" campaign. How about the (US) President's Council on Physical Fitness and Sports encouraging kids to "Be a Wonder!"?

Wonder Woman herself comes with a lot of cool toys. Why not play off these? Offer a remote-controlled Invisible Plane–tricky to figure where it is, but almost impossible to return to the store for a refund. Any girl or boxer would love her magic lasso jumprope, especially if it glowed in the dark. Wonder jewelry would include star earrings and silver bracelets. Kids could eat Amazon-powered vitamins, Paradise Island yogurt, maybe even Wonder bread.

And some day, some very special day...Sheldon on "The Big Bang Theory" will show up in a Wondie tee instead of those dowdy Green Lantern, Flash and Superman things he tends to. Ah, dreams!

So what did I wind up getting as my Angel Tree kid's extra gift? A Dora book. Sigh. Maybe next year...
Posted by Carol A. Strickland at 9:03 AM

Cool new WW stuff (Feb 2011): MAC's line of cosmetics http://www.maccosmetics.com/whats_new/4782/index.tmpl
I was so excited! I also lament the lack of cool WW merch and although not cheap, the packaging and quality of this line are both great,