This column first appeared at Comic Book Resources.com on Sept. 1, 2010.

by Carol A. Strickland

So here we are, just off issue #602 of Wonder Woman, and ankles-deep into a new era. Some fans may call what we’re reading an alternate universe or Elseworlds story, but since rumors are that it’s going to last for at least 12 months and it’s presented within the main title, I think it deserves a “new era” tag.

They’re easy enough to come by, if your name is Wonder Woman.

Some fans seem to think that presenting WW within a continuity that does not match the one she’d been in previously, is something shocking. They act as if there’s never been so much as a hiccup in presentation over her almost seventy decades of publication. But Wonder Woman has seen many eras come and go. Quite a few have been mere blips on the landscape; others have lasted for years. Far too many have twisted our gal at right angles or even upside down of her usual mode of operation.

DC also likes to throw a “Bold New Direction!” stamp on Wonder Woman stories even if they’re neither so bold nor so new, because Wondie’s sales have a habit of slumping. BNDs perk things up. (They also tend to anger some fans.)

William Moulton Marston established the original “Bold New Direction” for comic book superheroes back in 1941, when he created Wonder Woman. Then in the Fifties during the furor over Seduction of the Innocent and that book’s accusations about the anti-social elements of comics, Wonder Woman gradually underwent an unheralded new direction in which she “knew her place” in the superhero world, stopped being so daring and confident, and began palling around with younger versions of herself in order to find “acceptable” venues. This lasted until July, 1965. 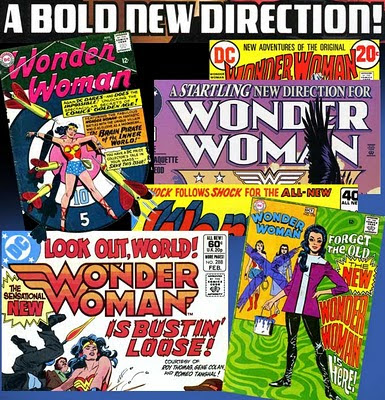 Even the Wonder Family couldn’t keep sales up forever, so editor Robert Kanigher came up with the first “Return to the Golden Age.” Instead of Nazis, now Diana fought fairly identical Commies, and characters were inked with hashmarks on their cheeks as an odd nod to the style of WW’s original artist, Harry G. Peter.

This era lasted about eighteen issues. The lettercols were filled with irate fan opinion from both sides. In issue 171 Kanigher said, “…I made an attempt to recreate the unique flavor of [the Golden Age.] I don’t know whether it’s possible. But I had to make the attempt. I hoped the fans would be interested.” Two issues later he announced that the Golden Age was dead and that Wonder Woman would move forward again.

Good to know that the fans back then were as vocal as they are now!

From 1967 to 1968 came a gradual evolution into contemporary superhero-style comics. Fighting super-gorillas, teaming up with Supergirl (twice!), that kind of thing. It was a time of zero surprises but at least the stories didn’t make you want to tear the issues into tiny pieces.

Still, sales were getting dangerously low, so issue #178 shouted, “Forget the Old—The NEW Wonder Woman is here!” and the Diana Prince Mod Era was born. In a desperate, last-ditch effort to boost sales and reader interest, Wonder Woman was stripped of her powers and let loose upon a world as a human. It was a part of DC’s evolution into the Bronze Age, in which many long-running characters experienced out-of-the-box changes. Most were exciting, and DC as a whole certainly was. A reader didn’t know what to expect next. Anything could happen.

The Mod Era lasted a little over four (fabulous!) years. Then after another Return to the Sorta-Golden Age (Mr. Kanigher had also returned), we got an era of Bronze Age superheroics. That lasted until 1977, when DC finally realized there was a Wonder Woman show on TV. It had debuted in 1975. Oopsie! DC switched the WW comic to Earth-2 of the past in order to mimic the show’s first-season World War II adventures (but not the second and third-season contemporary stories, which the show had switched to by that time) while the “real” Wondie landed in World’s Finest and Adventure Comics for the duration—which was a little over a year.

After that came the rest of the Bronze Age. In the midst of this, someone thought that the advent of Wondie’s new =W= emblem was enough to warrant a “Sensational New Wonder Woman!” label. Okay, whatever. 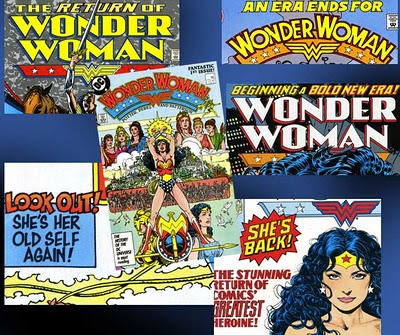 Then came 1985’s Crisis on Infinite Earths, followed in 1987 by the rebirth/reboot of WW in the “George Perez version,” the version most comics readers know her from today. Gone was any mention of Amazon Training (besides it being classic Bronze Age-level martial training with swords and shields, since these new Amazons had no modern technology). Diana was definitely brought up to Superman strength levels, she could now fly, Steve Trevor was no longer a love interest, Diana Prince was no more, and so on. Though the original staff eventually moved on, their basic world-building remained. More or less, we can say this era lasted 23 years. Pretty good job there in creating something with longevity, George. (applause)

Within the overarching Perez era, however, we got quite a few sub-eras, each heralded on covers and promoted about as well as Wonder Woman ever gets promoted. DC tried to counter the Perez mythos (whose sales must have been falling, or perhaps was too new-reader-unfriendly in its complexity by now) as well as inject T&A into the script during the later Messner-Loebs years, which lasted about 38 issues. If you’re unfamiliar with this era, I recommend it highly up to the point when it got too schizophrenic and T&A. Go grab yourself some issues and enjoy!

Now we’d start to see new creative teams who threw out major established elements to make room for their own views of how Diana should operate. John Byrne superimposed doppelgänger versions of characters over WW’s Perez cast, plus shoved the Demon and his Kirby kohorts to the forefront. He also managed to complicate Donna Troy’s origin—bet you thought it was impossible to be any more complicated!—and proclaim Diana the SECOND Wonder Woman in the eyes of the world. This kind of thing lasted 38 issues.

After a few more staff shifts and approaches, Phil Jimenez came on board with a try at incorporating all of Diana’s eras into one cohesive story, an Amazonian Theory of Everything. Diana’s role as Amazon ambassador, teacher and extremely busy example-maker was emphasized, though she scored few victories along the way. Toward the end of this era we saw the Amazon monarchy collapse. It reorganized into the Republic of Themyscira on a completely restructured (and keen) floating Paradise Archipelago. Twenty-five issues.

But Greg Rucka came along and with one kick from Hera, did away with most of that era’s direction. Now WW joined the rest of DC’s Dark Age. Those changes affected the attitudes and mission of Diana. We now saw Diana as subservient (instead of respectful) to her gods, and she committed an “official” murder with accompanying blame and guilt, as opposed to all those other times she’s killed with little if any repercussions. This era lasted 32 issues.

DC began a number of forgettable (well, to me) Crises that did little to showcase Diana. With “One Year Later” DC tried to reinvigorate Diana’s sales with new volume/numbering and a new creative staff. Diana Prince was back, and Nemesis became a mild-mannered stand-in for Steve Trevor as WW’s romantic-ish interest. The engine was still revving up (though sputtering due to colossal scheduling snafus) as the book nosedived and crashed into Amazons Attack! in which the entire theme for sixty-odd years of Wonder Woman was derailed. This storyline oozed into other books across the DCU, spreading the word of this sickening version of Wonder Woman and her people and adding to the world image of WW being a villain.

Gail Simone took what remained and applied giant bandages to it. A few large jars of coverup were required while she strengthened Diana into a positive icon again, though one whose world wasn’t quite the one Perez had fashioned. Even so, it was a valiant attempt and lasted 32 issues. 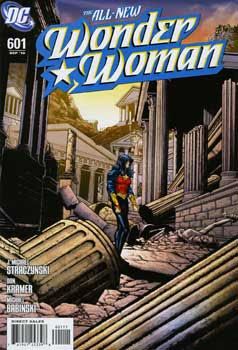 Now we’re in a parallel past world which may or may not become canon, but is heavily hinted to affect what canon will be in a year or so. When we come out of this riff, it’ll be an even newer new era. Perhaps it will even be a bold one.

You can make a game of it: Reread your WW collection and take a drink every time a Bold New Direction comes up. By the time you’re through I guarantee you’ll be quite dizzy and confused. It comes with being a Wonder Woman fan. You learn to roll with the punches—I mean, eras.

So fans of WW can rest easy. Those who like this new era can see that other eras have lasted for years and even decades, and perhaps this will last for some time. Those who don’t like this era can tell themselves that this too shall pass.

Essay questions: What have been your favorite eras? Do fellow icons Superman and Batman get this kind of treatment? As often as Wondie? Why do you think that is?
Posted by Carol A. Strickland at 1:26 PM

Years ago, I noticed that Wondy seemed to be the most repeatedly revamped pop-culture character. Maybe she isn't really, but she gets these strange revamps a lot.