Goin' On the Town! 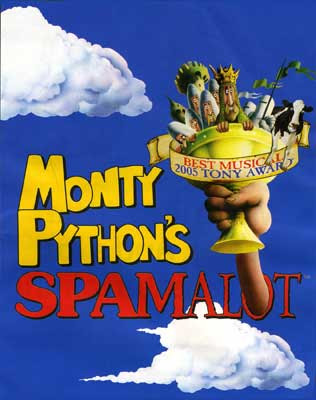 I'm just a partying kinda gal, y'know? Out and about all the time. As long as "out" is the backyard and "about" is dragging myself around it with a shovel.

But I'm taking a couple days off, tying into the Memorial Day holiday, and just by chance that ticket I bought last December was for an event that began the long weekend.

"Spamalot." It was about a third the price of what the DPAC (Durham Performing Arts Center) wanted for "Wicked" or "The Lion King." Besides, I'd wanted to see this as well, partially because decades ago I'd seen Monty Python and the Holy Grail. I hadn't understood much of it back then. Those crazy Brits. Those crazy Brits on heavy drugs. But I knew I'd be prepared for madness this time, plus it had been on Broadway so it must have been Americanized a trifle.

So after angsting over when exactly I should leave, I took off about 15 minutes before I'd planned. Yes, there was construction on the Durham Freeway, but I hit the comic store first, and thus came in from a more northerly route. Though I'd tried to get a hotel reservation close to the DPAC (it was full), I got in at the Millennium Hotel, a place I felt sure I could find in the dark of night and woozy from being out beyond my bedtime. Yes, I go to bed abnormally early. I also get to work abnormally early, so there.

With a stomach full of Subway sandwich (ritzy!), I hit the comic shop and asked for helpful directions to the DPAC. Unfortunately, no one there could tell me much, but we puzzled over the map I'd downloaded. I decided that it wouldn't be that difficult to find. There'd be no more than two loops needed to catch the right one-way street.

Durham downtown is all one-way streets. They have a special loop that you drive on, and after a few times around you can spot where you want to go and try to recall where you were when you saw it, so that on the next loop you can turn at the correct corner.

But this only took about 1/8th loop. There was Mangum Street, and they'd already sectioned it off for DPAC traffic. (As opposed to DBAP [Durham Bulls Athletic Park, which is the new version of the old DAP, or Durham Athletic Park, which was what you saw in the Bull Durham movie] [The movie crew built the bull, which was moved to the new DBAP later.] traffic the next block over, which involved some kind of baseball tournament of the collegiate or high school variety.)

The website had said that both cash and credit card were good for parking. Wrong! Cash only. Good thing I had some on me (a rarity). I parked on the 239th level and took the steps down to the street. My co-worker had told me he thought there was direct walk-through to the DPAC on the various levels. He was wrong.

The DPAC was quite impressive! A huge lobby, dramatically decorated. I arrived about 45 minutes early, and already the concessions were mostly out of food. I rented a mountaineering kit (recommended) and proceeded up about 4 storeys worth of stairs to Level 2.

It was damned hot! I broke into a tee shirt-destroying sweat before I could grab a $3 bottle of ice water. Eventually they dinged the little tones and the doors opened. I checked my crampons and made it up another 5 storeys, to the lower balcony level.

Front and center! You betcha. A great view for the most part. It was curious that a few times during the performance the sets had been done so that major focal points (the Grail) or hiding cast members were either mistakenly hidden from or visible to the balcony folks, of which there had to be at least two thousand. That balcony was HUGE. I could barely see the nose-bleed seats waaaaay up there.

The play itself was fabulous! I couldn't make out some of the words because either the orchestra (such as it was) was a wee bit loud, or the audio system seemed to slur things. Then again, my hearing in regards to understanding conversation has never been that great. But it helped that I'd seen the movie so long ago, and eventually (perhaps they straightened things out electronically?) the sound came clearer.

Snappy songs, goofy situations! Lots of the Monty Python animation bits used, both as projections and scenery. The performers had more energy that I have in an entire year, and jumped, pirouetted, and farted their way across the stage with verve. The Black Knight and Killer Rabbit bits were hilarious to watch, with the clean dismembering and all.

The men had fabulous voices, but the Lady of the Lake continually batted it out of the park! What a voice! Let's check the program. She was played by Caroline Bowman, in her US touring debut. We WILL be hearing lots more from her!

Intermission came and wouldn't you know it? I was the only one on our row to get up. Front and center, you recall. Now I had to go up to the next level in order to get out, so I took the time to put on ye crampons and sallied forth. Then it was down 10 storeys to the nearest ladies' room. Ah, hardly any line. Then I looked again.

The line took a sudden turn and went thataway. Waaaaaaay thataway. I began to walk. And walk. And walk. Finally through the haze of distance, I saw a sign: "End of the line for Ladies' Room." I shoved some old ladies out of my way and ran.

The sign-carrier assured us that though holding such a sign seemed menial, it was actually a nice bit for ye resume. He also told us that the line would move—

Whoops! Didn't hear what else he said. That line moved FAST. We were shuffling at a smooth clip. The ladies' room had about 30 stalls in it as well as a traffic cop, pointing at the next stall available. Staffers shoved paper towels toward you before you could even shake your hands out over the sink.

The second act was even better than the first, though I had a couple probs. There was the Jewish number, which was troubling to me, but it really didn't say anything bad about Jews. It just singled them out as an ethnic group. Still, it's true enough that there is a lot of Jewish influence in the New York entertainment industry (if not that of the entire US). By the time it was winding up I was greatly enjoying all the wonderful dancing. Then came the gay number.

Any gays out there? I'm usually bothered when gays are used in fiction because they're almost always flaming queens, as was used here. I don't think that's respectful. Funny in occasional small doses, yes, but... Well, I was troubled. Am I too prudish?

Other than that, it was all great fun. Many in the audience were familiar with the musical, because they whistled along to the first time through of "Always Look at the Bright Side of Life." Later, of course, came shameless pandering to the local audience and an unlucky audience member (this a not-THAT-old lady who had trouble walking) singled out to be brought on stage and given an award and applause while King Arthur talked about Durham being the (close enough) home of Scotty McCreery (who wouldn't be crowned Idol winner for another 40 minutes) and Clay Aiken (who played in this on Broadway, come to think of it).

The flashy finale came, then the audience singalong, which was a load of fun, and then lots and lots and lots of applause for everyone.

Then we of the balcony all got out our ropes and rappelled to the street level. Parking deck stairs up were unlit (scary, if not for the crowd), and exit was surprisingly speedy.

Got to hotel and the cookie I'd saved from Subway. Whew! What a party animal I am!

I must do this again. Maybe in about two years, once my energy recharges.
Posted by Carol A. Strickland at 2:14 PM

Yes, I have sat in those balcony seats. too bad the scenery wasn't worked so you could see it. When we saw 'Phantom of the Opera', the only thing hidden was the top of the staircase he slowly struts down in one scene. DPAC is fabulous. They do have elevators.

Ah, but we leave the elevators to those who truly need them! Besides, I hadn't done all my exercise for the day. This certainly completed it—and then some!