Snakes on a Plain Patio 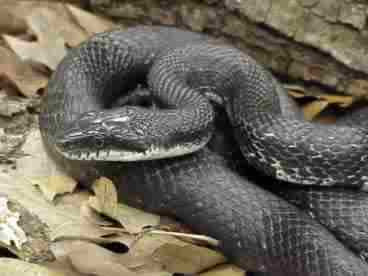 Friday afternoon! Free! Well, I have to finish that painting, but I want to check to see what the irrigation guy did in the garden this morning when he came to finish the job.

And oh yeah, I want to get rid of that netting on the patio.

Y'see, in a fit of energy the other day, Obi galloped to our small pond to get some water. He has double-filtered water in the kitchen, but no, he wanted scummy water. I happened to be nearby when he got stuck in some netting. "Meow! Meow!!"

It's bird netting, stuff I put over the pond in winter to keep the leaves out. I had pulled it off the pond when the temps warmed, telling myself that I'd bag it up and take it to the dump—later.

Here it was, the end of May, and the netting was still next to the pond. It was sort of half-and-half, netting and leaves. Obi got a claw stuck in it. I pulled him loose, then gathered the netting and tossed it up on the cement patio where he'd be able to see and avoid it until I took it to the dump the next day.

Okay, so that was over a week ago. The netting lay still on the patio, still filled with leaves. On Wednesday I walked by and jumped back. A black snake tail twitched at the edge of the pile.

My co-worker and I had just had a conversation about snakes. She'd run into a rattlesnake or something at her house, and we'd both checked a Web listing of NC snakes. She showed me that if a snake looked like they had a full set of mumps, it was poisonous.

This seemed like a black snake, so I told it that if it were smart it would find some other place to get out of the sun, as it might get caught in the netting.

Thursday as I walked past, I noticed the tail again. This time it was on the other side of the pile. Oh good—not caught. I determined that Friday afternoon—today, when the dump was open again—I'd bag up the netting and get rid of it.

But there was the tail again, on the side where it had been Wednesday. I edged closer. No movement. Taking the netting from the opposite side, I lifted it, hoping that the snake would then slither off into the woods.

Instead, it came up with the netting. Eeek!!!!

But I've been communing with nature lately. I hit a suicidal squirrel with the car the other day—first time in a LONG time I'd hit something—and, thanks to a book on animal communication, was able to let it go. Ordinarily I'd have been bothered for at least a week. Now I knew the squirrel was doing fine in the Hereafter, and its end had come quickly.

My cat Bran died last Thanksgiving. He later whispered to me that he was having a good time, but was waiting for Obi to join him before he really kicked back and had fun. In the meantime, he sent me an injured kitty because he knew I'd take it to the doctor and then find it a good home. (PS: I heard recently from Kitteh's—now Dexter's—new mom, who reports that he is king of their household and beloved by all.)

So I reminded myself that in a previous life I'd been a Franciscan monk, and went inside to find my good scissors and a glove.

Ew. Ew. Ew. I cut away all the extra netting I could, trying to get in closer. That snake (I named him Mr. Snakey) (I have a way with names) had really wormed his way, so to speak, into the tight nylon netting. After snipping closer to him, the looong tail began to undulate. Ew. Ew. Shudder!!!

It got to the point where I couldn't help but have to touch the guy so I could get a steadier bead on cutting the net. He was quite dry, not slimy at all. After a while, though, especially as I was getting closer to his tiny little head (and he squirmed in my hand), I went inside to get some thick gloves. Ick! Ick!

Finally, FINALLY, I got to his little neck and managed to get all but a lacy collar of netting off him. He slithered out of my grip, down to the patio, and curled up there, licking the air.

What to do? First, I needed to get the pile of netting away from him so he couldn't get caught again. I picked it up and—

This was far down inside the pile, and also firmly stuck.

A car drove up next door: My evil neighbor's kid and her friends. I asked if any of them wanted to help with a snake problem. The two girls quickly and firmly declined, but EN's daughter volunteered her boyfriend. He was not enthusiastic.

"Is it poisonous?" he kept asking as he eyed Mr. Snakey.

"I think it's just a black snake. But I'm not sure." The guy had white under his mouth. A cottonmouth? He didn't have mumps, but co-worker Peg had said that there was an exception to the mumps rule, and for the life of me I couldn't recall what kind of snake that was.

We both stood there as the snake reared up and hissed at us. BF decided that EN's daughter's dad would love to help me instead.

Dad (Marc) trotted over. "I love animals," he enthused. This from the guy I have to keep reporting to Animal Control for his mistreatment of his dogs. But I smiled and thanked him, and he revealed that he used to catch snakes to release them into the wild.

It took a rake, stick, and sheets, but we finally got Mr. Snakey to hold still. (And yes, he was just a black snake.) While Marc held him I snipped off the last of the netting. Mr. Snakey sped off behind some trees.

Now it was time for Mrs. Snakey, who'd obviously been injured by the netting. "I don't think she's had any water for at least two days," I told Marc. She was entwined almost up to her eyeballs, which required a lot of precise cutting. Difficult to do, especially since my sweat was running onto my glasses. We had to keep stopping so I could clean up. And Marc stopped when Mrs. Snakey got so scared she took a crap on him.

Finally, with more help from rake, stick and sheet, Mrs. Snakey took off to find her hubby, both now net-free. Hope she and he will heal well. I thanked Marc PROFUSELY and believe me, most genuinely. The job would never have gotten done without him!

Black snakes are excellent for dealing with rats. I hope that they eat copperheads as well.

And I hope that they do such far, far away from any path I may travel again!
Posted by Carol A. Strickland at 8:09 PM

How great of you to free them! It would be nice if there were more people in the world who would act as you did.

This seems to be the season for snakes! We're overrun with them, regardless of how the dogs try to discourage them from entering the yard (or the house, for that matter).

Great blog, by the way!

Thanks! Turns out that snake my co-worker saw wasn't a rattlesnake, but a copperhead. Now she's wishing for a king snake, which supposedly eats copperheads. She was also told that black snakes keep other snakes out of their territory, so in the future I'll try not to be so negative about Mr. & Mrs. Snakey.