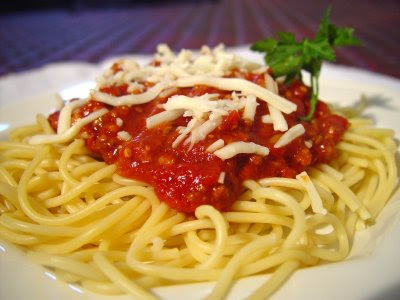 This week I watched Hungry Girl, which I've never watched before, and she made her version of spaghetti sauce. It consisted of tomato soup with a pinchful of extras. As someone who has actually been served tomato soup over pasta in a restaurant, I just want to say, "YEECHHH!"

Spaghetti sauce (or marinara sauce, take your pick) should have some oomph to it, some depth, even if it's an easy-to-make version. Last night I watched Rachael Ray make her own sauce, which started with roasting eggplant, peppers, and garlic. Too much work for my tastes! (Though I might try it sometime.)

Here's my mother's recipe, adjusted just a bit by me over the years. It's fairly simple and makes a vat of sauce that can be used on anything that requires such.

Brown 1 1/2 lbs. ground chuck with a diced onion. You can substitute ground turkey, but DO NOT substitute hamburger-flavored soy product, as it will turn, well, just nasty. I have three very large Baggies of such in my freezer that I haven't used yet.
When that's done, pour off extra fat if there is any, and then add 3 or 4 chopped stalks of celery. You can allow maybe a leaf into this, but I wouldn't suggest more than that.
Then add a chopped green pepper, large can (bigger than the 15 oz. 24? 30?) of tomatoes. They can be whole (in which case you have to smush them) or diced, just as long as they're not pureed.
2 pkgs of spaghetti mix. I usually get the stuff with mushrooms or mushroom flavor (who knows what it is?), or I can add some sliced mushrooms to the sauce.
Tbsp. or a little less of salt.
Simmer on low heat for a half hour, then take 3 small cans of tomato paste (I think these are 3 oz each?) and dump them in. Fill up one empty can with water and smoosh it around to pick up any paste that's stuck to the sides. Then pour this water into the next can, do the same, and repeat for the last can. Then pour the water into your sauce and give it a good stir.
At this point, taste it to see if it has enough salt. Also: you can add a little bit of sugar or baking soda to counter all the tomato-y acids. Depending on what you're using the sauce for, you may want to add more water to make it runnier.
Simmer another 20 minutes, then let cool. Put in the fridge and let it sit there for a day before even considering serving it.

And oh heck, as long as it's on the same page in my recipe folder, here's

It's not as good as the Veg-All recipe but it's good in its own beany way. Very hearty! I'd serve it with some cornbread on the side, since this recipe doesn't come with its own cornbread topper:

Brown 1 1/2 lbs. hamburger with 1 chopped onion.
Add 3/4 of a large can of tomato juice. (I usually substitute regular V-8 juice here with no probs at all and feel noble.)
1 tsp. salt, 1 package of chili mix.
Simmer 1/2 hour.
Add 3 cans chili beans and 3 cans pinto beans, and don't drain them first.
Bring it all to a boil and turn off. This is another recipe that has to sit for an hour or two before consuming. Watch your heat/cool as you don't want to grow bacteria. You could let this sit out for an hour and it'd still be quite hot enough not to grow anything rancid and yet be warm enough to spoon into a bowl.

Don't forget the Beano!
Posted by Carol A. Strickland at 7:19 AM

Will H in Houston said...

I love spaghetti since I was a child. My mom always cooks me, my brothers and my sister whenever it's our birthday or other special occasions that needs celebrating. Thanks for sharing this recipe. Now I can cook for my mom.