Lifestyles of the Middle Class but Still Fabulous

Where did the years go? I thought that once I'd reached 10 years in my current home, things would be perfect. I'd have everything done that I wanted, and maybe it might be time to move on to a new project.

But a few months ago I realized that I'd moved here in 1999. It was only last year that I'd begun making any big changes, and those were in the yard.

Well, the yard's getting there. The big-ticket item that remains is to re-do the pond and while I'm doing that, give it a waterfall.

But the inside of the house...

My previous (and first) home was custom-built by a supposedly award-winning guy who had some time on his hands. My loan was with Farmer's Home Admin. (no, I'm not a farmer), and they had fairly stringent requirements. So no, I couldn't get that dome home I'd wanted. But yes, they did give me an additional mini-loan when they discovered how Award Guy had finished my floors. He'd left them plywood. With the lettering still on it. FmHA allowed me to get carpet and vinyl to cover it up.

Still, the home wasn't the greatest layout. It was difficult to place anything in it since there were load-bearing columns in the middle of the open plan. I reworked it a bit, replaced the cheap but huge windows (it was passive solar) that fogged up almost upon arrival, never got the floors fixed, which had definite dips in them. (Award Guy swore to FmHA that snow had never been allowed to sit on the floors, though I had lots of pictures that showed week-old snowpiles there.)

But I put in some marvelous ponds, a fountain and a large waterfall. The front entry was covered by a huge, magnificent trellis that I did all by myself, complemented by a multi-level, small deck (also done by moi). The cats adored it and it looked great with the climbing roses. My bed had a skylight right over it where I could watch the moon and stars. And before the Jerk Neighbors moved in upstream and put in their lake, a lovely, magical stream burbled through the property.

But I wanted a one-story place for my knee, somewhere that had a better flow inside. I started looking around and soon it became apparent that the only acceptable house I'd be able to afford would be a double-wide. At long last I found one with a nice layout. 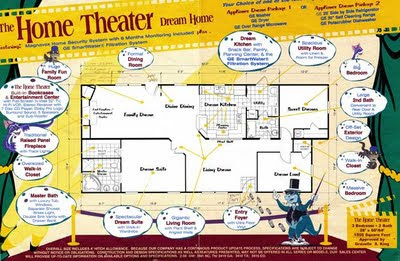 Okay, so I had them install it backwards. It didn't make sense to me to have visitors arrive in the more private area of the home. Nor was it wise to have the master bedroom/bath overlooking the neighbor's driveway, rather than looking out to the vacant wooded lot next door. The place was put in at an angle, so I could sit on the front porch and admire that lot, as well as my own front yard/forest.

I had a new front door installed in a blank wall (it's pencilled in on the plan above) and a porch built outside it. The "Sweet Dreams" bedroom eventually became my comic book library/guest room (murphy bed)/cat lookout station/Brad Pitt shrine/art business storage center. Getting rid of the bed has helped.

"Dream Land" bedroom is now my writing office, though it also holds an art flat file. The closet is now bursting with finished paintings.

The Living Room is my studio, with a library wall, a shelf for plants that have to be brought in over the winter (anyone want a free amaryllis?), and minor garden stuff.

The guest bath has a shelving unit with emergency supplies, since it's the only inner room I have. That unit sits in the bathtub. The rest of the space is kitty litter space, of which there's barely enough room to keep the boxes. There's just enough square footage left over that I can stick a foot inside and use the sink to clean my brushes.

But despite knowing that many Japanese people have to cram their entire family into a 400-square-foot apartment, I found that this single person (even with 7 cats) (maximum number) felt cramped with 1600.

Okay, I'm a bit of a hoarder. I'm a victim of CHAOS. It didn't help that every time I got the urge to organize and throw out, the cats would see the organized stacks of material and jump in, scattering things everywhere.

But I'm down to my last cat and the vet confirms that Obi probably won't live to see August. When he takes off to gambol through Heaven (Bran-Bran says he's waiting for him so they can really have fun) it'll be time for some serious restructuring of the Mess.

And also of other things. I desperately need good windows, since NC law allows manufactured homes to get away with double storm windows instead of real ones. I want windows that look nice and that you can open from the top, so as to get fresh air even when it rains.

How I need new floors! Seven cats, twelve years, and old carpets do not make for good current conditions. Plus, the vinyl floor I installed in the studio—though done to package directions—didn't work and needs to be replaced. (Though it looks REAL good in places.)

Why did Oakwood put the hot water heater in the middle of a wall? It's had to be replaced once already. I want one of those instant heaters that can be installed somewhere people can get to it for repair. And next to it I need a whole-house water filtration system. The water here, unlike my sparkling, tasty water at the old place, is reddish brown. Who knows what it's been rotting out?

I need a larger studio. I need a home gym so the treadmill won't take up a quarter of the family room. I need the fireplace replaced so it actually works. I need that hole in the wall where the old analog TV had been built in, repaired and de-angled. I need a porch overhang so that when it pours down rain I don't have to stand in the drench coming off the roof to get the front door open. I want a place where UPS can leave packages so they'll be dry. I want a proper library, though I promise I will seriously cull my books! And I need lots and lots of storage for the art business.

I want, I want, I want. I figure it'll only cost about, oh, $70 thousand max. One winning NC lottery ticket should do it. Just one.

In the meantime I shall begin with small steps. First that hole in the wall is going to be fixed, and the wall expansion joints in the front of the house will be disappeared. New floors for that section.

Oh, and did I mention that my La-Z-Boy—the only chair in the family room—broke the other day? And that the dining table needs replacement?

How much are those lottery tickets anyway?

Do others have these kind of home renovation plans? How long have you been in your house? Do you want to do some major reno, or is it perfect the way it is? If you rent, how do you stand not customizing your home? (I can't imagine not doing so. The first thing I've done with both houses is to cut a cat-sized hole in a wall the first day I was there so as to install a kitty door. I doubt a landlord would look kindly upon such.)
Posted by Carol A. Strickland at 8:12 AM