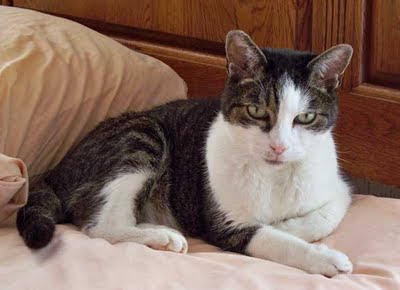 It was 1993, and I'd just rescued a tiny kitten from the middle of a highway. I never put up "found" signs because I wanted to keep her so much (and there were never any "lost kitten" signs). Katie was A-OK, but she was faced with a house that had five older cats, none of whom were particularly pleased at her presence.

So I went down to the animal shelter and a kitten stood in his cage, trying to get my attention. He was cute as a little button! I filled out the paperwork, plunked down my money, and a couple days later was able to take him home. 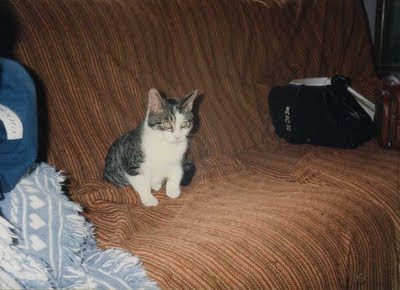 My parents were appalled that I would bring the herd back up to 7 cats, but it felt right. I debated whether to give my latest a unique name or a fannish name. I played with a combination of the two: Opie + Obiwan = Opiewan. But in the end I decided on "Obiwan." It's a grand old name!

Katie and Obi played together as kittens and young cats, but it became clear that Katie had a mind of her own and liked a more solo life. When the herd number dipped after a couple years, I got two more kittens: Molly and Bran-Bran. Both absolutely adored Obi and attached themselves to him, though Molly didn't like Bran much. (He'd bullied her when she was very young.) 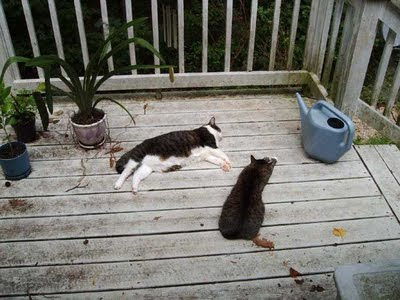 Molly's eyes would shine whenever she was able to get Obi to herself. He abided her. But his best and inseparable buddy was Bran. Obi would take the easy road in life (perhaps in part due to him being on the heavy side, though maybe the sitch was vice-versa), and Bran would buzz around him until they both got tired and napped nose to nose.

Someone once told me about ragdoll cats, the felines who adore being held and petted above all else. While not that breed, that was what Obi was. He loved being petted. He spent much of his later years curled up on my left side whenever I sat down, happily getting his ears or chin or belly rubbed. 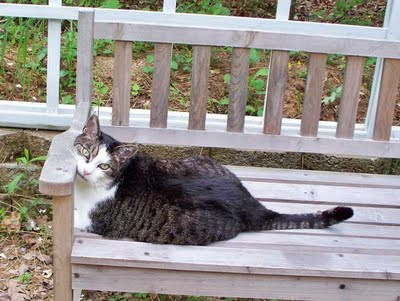 He also loved finding sunny spots, then shady spots, and supervising the yard and me. He was very frightened of strangers, which made finding a cat sitter almost impossible. He often needed meds twice a day, but if a sitter showed up, he'd take off for the deep woods and wouldn't come back until I was home and Stranger was gone. So I had to board him at the vets.

He loved to climb. I have a double-mirror door in my bedroom with a ledge above it. Often I'd find him and Molly up there, surveying the bedroom. The ledge required a good 5-foot jump for one section of the climb. Even when Obi had been diagnosed with severe arthritis, I'd often come home to find him on top of the kitchen cabinets, from where he could watch a good bit of the house. 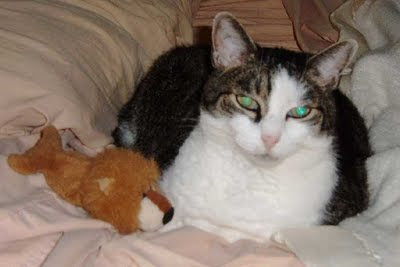 Both Katie and Obi loved toys, but Obi loved them most of all the cats. Here you see him with Mr. Lion, a favorite. Obi would choose the middle of the night for his fiercest hunts, and come into the bedroom hoooling that he was the Mighty Hunter and had returned with prey. Then he'd jump or climb the cat steps to the bed and sleep with the toy tucked close. Often he'd drop the toy halfway up the steps and then crawl into bed. Unfortunately for Mr. Lion (or so I believe), Obi dropped the toy into the trash can beside the steps, and Mr. Lion went to the dump.

He knew what "Do you wanna go out?" meant. He'd be dozing in bed and I'd ask him, and his ears would perk up. Once after asking him with him apparently deciding to stay on the bed, I started to make a side trip before going out myself. I had to turn around because Obi was galloping hell-bent through the studio. He skidded to a stop next to the back door. (Refusing of course to use the kitty door next to it, because I would be going out and thus he'd be using the hooman door, the door of choice.) He looked at me accusingly. "You SAID you were going out!" I ditched the side trip and we both went out for a stroll.

One New Year's Eve Obi and Bran went outside for a before-bed stroll. After a while I heard dog barking and discovered the neighbor's dog had treed both right off my front porch. After the dog was called back home, Bran came down, but Obi stayed up that tree until daybreak. 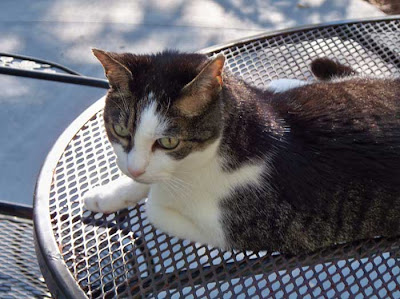 Maybe five years ago the doctors discovered that Obi had a heart condition. He went on meds and I steeled myself to lose him early. But he hung in there. On occasion he had to go in for enemas, as he also had an intestinal condition. He had pretty bad arthritis from his hips down, but it never seemed to bother him. He was always jumping here and climbing there. Three years ago I took him in for his annual tooth cleaning and, after viewing his bloodwork, the vet said nope. Again I steeled myself. Gum disease easily leads to heart attacks. On top of all this, he was diagnosed with kidney disease.

Obi also had amazing sneezing fits. Think of the hugest sneeze you ever had, and then do it about 15 times in succession. Wait a minute, then repeat. Repeat once more. That was him. I told the vet I thought it had to be allergies, but she said allergies didn't appear as sneezing in cats. (Though lots and LOTS of Internet sites say she's wrong.) Last spring during the height of pollen season I wondered if Obi would die of sneezing. One time he did it in front of the vet and she swore in surprise! She said we could take X-rays of his nose and cited a cat who'd had a piece of grass stuck in his nose for years. Then she remembered that Obi was under a "no anesthesia" rule and said that cat's nasal passages were so tiny we'd probably not be able to see anything anyway.

He was also somewhat deaf these past three years or so. He could hear certain frequencies. Loud TV bothered him a bit, but if someone whistled or blew a horn, he was all, "What's that? Where'd that come from?" But when I sang to him he seemed to hear me, and when I spoke he watched me. Maybe he was reading lips? I'd always thought his eyesight wasn't the best—thus his shyness around strangers, as if he couldn't figure out what that blob was—but often he'd gaze out the window, keenly watching something in the distance (or up close) that was interesting. Next life, Obi: learn English! Communicate more clearly! 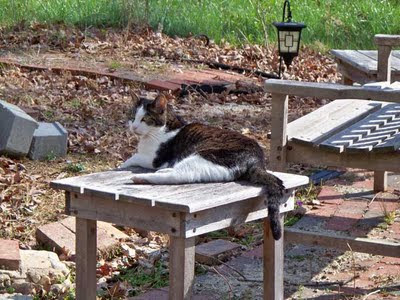 The rest of the herd thinned until it was just Bran and Obi, the inseparable. I constantly worried about how the younger Bran would take it when Obi died. Obi was Bran's hero and buddy. But Bran suddenly died and Obi was left alone.

The shock was somewhat lessened when Kitteh (Dexter) came to stay for a few weeks and recover from surgery while I found him a home. Obi hated Kitteh! Eventually he got to the point where he didn't go into a hissing fit, but man, was he happy when Kitteh went away! I caught him smirking several times.

Then Obi seemed to notice that he was the only cat left. By now his kidney condition had gotten him to normal weight, but he continued to lose pounds. He hit his 18th birthday and grew more and more sedentary—if that were possible.

Last night he was restless. His back legs, which had become more cumbersome over the past month, were seriously lacking in strength. He threw up a couple times and finally made four "I'm not feeling good" noises. He didn't have to suffer long. The vets were efficient and kind. 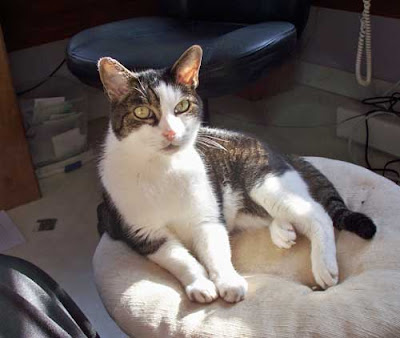 Now, after Bran died, he came back to me to tell me that he'd sent Kitteh to me because they knew I'd fix him up and find him the home he was supposed to have. But Bran also told me that he was sticking around because it wouldn't be long before Obi passed, and oh boy, then they were going to have some fun!

So when I tried to peek at the ether last night I expected to see Bran and Obi frolicking. Instead I saw a large group of very happy kitty angels, jumping around in flight and having one sweet time being together again.

Obi, my Pookie Boo-Boo buddy, I'm so proud and glad that you chose me to be your mama in this lifetime! May you and all your kitty friends have splendid lives to come! 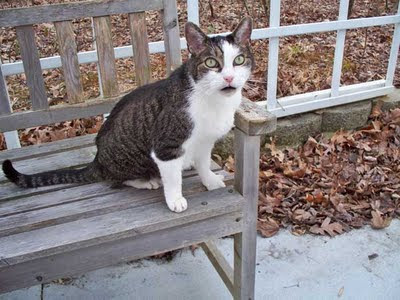 All I can say is, what a great home you made for those guys! You have every right to be proud.

Aw, thanks. I've given all the cat stuff to a no-kill shelter so that other cats can experience a bit of the Good Life, too.

Love this blog, keep up the great work wish you all the best.