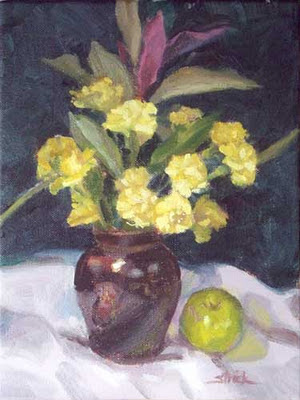 Many of you know that one of the highlights of my year is to attend Art of the Carolinas in Raleigh. I've learned to get a hotel room so as to avoid driving on I-40 after dark (and usually at rush hour), and to have an excuse to get room service for breakfast.

I stumbled onto AotC in its very first year when I was driving aimlessly through Durham because I was bored one weekend. Now, I NEVER drive aimlessly. This was a first for me. The radio station I was listening to was doing a remote from this event called "Art of the Carolinas," and it was being held in Research Triangle Park. Gee, that was just a few minutes away. I drove over and was astounded by the event having a workshop in which famed watercolorist Tom Lynch was teaching. (As I hadn't signed up, I couldn't get in, and so just attended the trade show.)

The next year I was prepared, and signed up for a Lynch workshop. AotC holds four days worth of 3-hour and 6-hour workshops, along with having a trade floor full of the latest and greatest art supplies, ably demonstrated by renowned arteests.

One year I think I took three solid days of workshops, 8 AM - 8 PM. I swore I'd never do that again. I value my sanity! 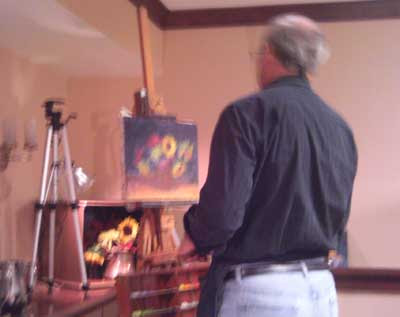 Having gone through a gamut of subject matter over the years, this year I decided to hit two versions of flower painting technique. I started with James Sulkowski's "Dynamic Action and Design in Floral Painting." Here was a realistic approach to the subject, with a concentration in really playing up a focal target in the picture and toning everything else down. That's my painting at the top of this blog.

I finished it in 4 1/2 hours. My brain halted after telling me, "It's done." Artistic neurons refused to fire. But class was 6 hours long. I bowed to the inevitable and snuck out. (A neat trick considering I'd lugged about a hundred pounds of supplies into class in three different bags, plus easel.) The neurons were in cahoots with my feet and back, I think. If I could have sat down for a while I might have been able to drum up some artistic energy. But certain folks (dark look their way!) confiscated the few remaining "extra" chairs for their art supplies. The nearest place to set one's butt was in the hotel lobby. Buh bye!

Out in the COLD parking lot, Dan "the Art Man" Nelson was painting one of his huge, gorgeous landscapes. I asked him why he didn't do Facebook videos (real time, start to finish) any more, and he said he was doing stuff on YouTube and I should stop by there. Here's a good start. Or try this one. 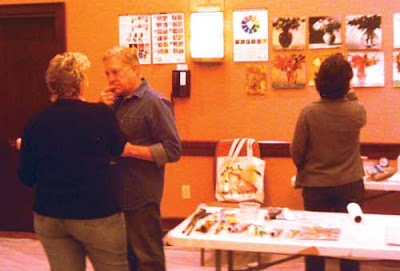 First thing the next day I took a Bob Burridge course: "Abstract Florals from Loose, Colorful Spatter." Now, you may know Bob (above) (someday I've got to read the instruction manual for my newest camera, as it began to go crazy about now) from his great newsletter, the Artsy-Fartsy News. I haven't decided whether Bob is more artist or showman, but he certainly knows how to run a lively class! He eschews the realistic look with its use of tiny, exacting brushes. He said that seeing Manet's later florals made him cry in public and change his art completely. Must remember to look those florals up! Bob says that an artist must demonstrate that they have "fire in the belly" and aren't just copying nature mechanically.

At any rate, this is one of the paintings I did in his class, utilizing the spattering/general mooshing-about of paint, followed by opaque negative painting: 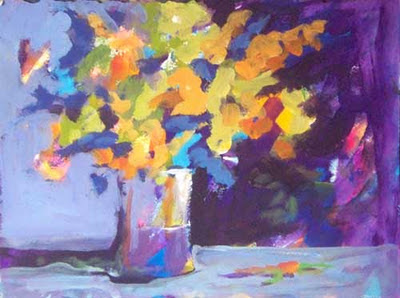 Bob says that a painting is never finished. Oh, is that why I never know when it's done? He says the trick is to stop at an interesting point. This point is usually at the 90% mark. He also claims that he's going to make his huge art award (CT WC society? Somewhere up there) into a rodeo belt buckle so he can show it off to all the artists he meets and give himself more credibility. Uh huh.

Let's see. Next was Joe DiGiulio, whose classes I've also taken before (like Bob). (Joe's wife, Sharon, runs AotC. I often spotted her over the weekend. Her eyes were spinning and she looked like she was about to collapse, but things seemed to be going quite smoothly.) This time I was coming through to learn how to make series of abstracts, since everyone says you're supposed to paint in series in order to get galleries to notice you. Joe says that abstracts are made up of line, shape, color, and texture. But when you do them in a series they get a fifth quality: context.

He began his demo by pausing his brush above the canvases and saying, "I have no idea what I'm doing here." A woman in the audience quipped, "Then why are we paying you money for this?" Ah, we were off! We had terrifying fun.

And as usual when I get into an abstract class with no idea of how to begin, I turn to Wonder Woman. Here's the Wondie triptych I did:

Last but not least I got to SIT DOWN for 3 hours (my feet and back were KILLING ME!!!!!!) to attend a workshop on printing giclées. "Giclée" is a fancy French term for "ink jet print." Now, the ink is supposed to be as permanent as possible (they make great stuff these days at reasonable prices), and the paper should be archival. This particular workshop was sponsored by one paper company who had the testing results to back up their claim that they were best in the world. (Canson brand "Infinity" paper, which comes in all kinds of different types, including a watercolor paper that, after being fixed after printing, you can paint on). Noted painter Dick Ensing ran this class, and if I could suggest something, it'd be that he have a projector so everyone could see what the HECK he was doing with his Photoshop print commands. He could also stand to speak up a bit. And frankly, it didn't look to me like his monitor was color-corrected, but it might have been the angle I was looking at it.

He did color corrections a LOT differently than I do. Then again, he sells a SLEW of prints every month, so who am I to question?

One lady in the class persisted in calling giclées "zhiglays," and a gentleman said something along the lines of "zheegloiz." It's "zhee-klayz." And "Arches" paper is "arsh," as long as we're correcting everyone's French accent. We all kept saying, "arrrrrsh" and getting a big kick because it was late and we were getting silly.

Anyway, that Epson printer moves close to the top of my "must buy" list. Just as soon as the Brad Pitt/packing supply/comic book/frame storage guest room gets cleaned out, I'll have a nice space for it.

So if you're an artist and want to learn more from quality teachers (there were gawd-awful ones at AotC as well, but over the years I've learned who is who), check around to see if you don't have an event like AotC in your area. If not, come to NC next year two weeks before Thanksgiving and join the crowd! Give me a buzz and we'll go next door to Bahama Breeze for dinner one night (drool!) and compare notes.
Posted by Carol A. Strickland at 7:54 PM