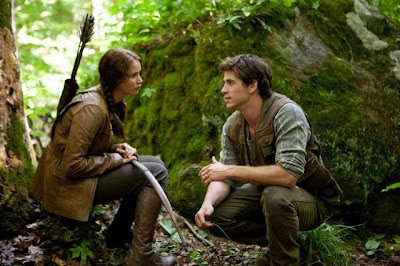 Recently I both discovered and finished the Hunger Games trilogy, and have been awaiting the movie’s release with excitement. The previews looked great, even while I had no idea that Suzanne Collins had co-written the screenplay.

For the first time I actually asked to leave work early so I could catch the 12:30 PM show today. “K,” my supervisor economically emailed me, so I tried to keep watch of the time this morning. Scarfed down a lunch earlier than normal, then wrote a response to someone and...

It was noon! I ran out, jumped in the car, and cussed at myself for not leaving earlier. It didn’t help that one of the lights out in the middle of nowhere between Hillsborough and Chapel Hill had been mis-programmed so it gave the busy highway a short light and the empty road that crossed it, the long. Or that the idiot in front of me turning left didn’t pull the hell out into the intersection so they might actually turn sometime this century. Come on! Come on!

I squealed into the strip mall with the theater and noted that there was no line. Whew. Trotted over, flashed my pre-paid ticket, and went inside. Hit the bathroom, got a “medium” non-caffeinated drink which looked to be about two liters, and, steeling myself to fight for a seat, went inside the theater.

It wasn’t that bad. I scored a fair/meh seat. It was on the side and not at a good vertical angle, but this theater is not a particularly good one. Good enough.

They hadn’t started the previews yet. After a while, when the “Movie trivia” slides had started repeating, someone two rows in front of me started grumbling that it was past 12:30. “Start already!”

The murmuring of the crowd increased. A guy down the row from me became louder. When someone commented, he said, "What do you expect? They gave me a barrel of Coke to drink! I'm caffeinated!" and pointed to his empty two-liter cup. Everyone laughed. Finally a lady from the staff came in and said they were having problems with the projector. It would just be another five minutes.

I’d only taken two sips of my drink, but thanked my lucky stars for the wait because I had to hit the bathroom again. In the lobby I heard the lady tell another staffer, “We need to talk to the company now!”

I relayed this to my rowmates when I returned, telling them that I didn’t think “five minutes” was going to hold true. We waited some more. And some more.

The Coke guy got up and went out into the lobby. When he returned he said that he’d spoken to the ticket taker and she said that the projectionist had quit the previous night.

About that time a slide came on the screen saying, “Job opportunities. Apply at the front lobby.” A few people commented about that.

Well, more people went out to the lobby. I hit the bathroom YET AGAIN. (I hadn’t drunk much this morning, really!) We all compared notes:

Apparently the projectionist had indeed quit the previous night. Also apparently the only thing one has to do to run a digital “projector” is to hit a button. That is, after one has keyed in a code to unlock everything.

They had a code and it wasn’t working. No one at “the company” was able to find the correct code. But they’d get it, they promised. They were going to skip all the previews so we’d still get out at about the right time.

So we sat. I got up to stretch and noticed that all the seats behind me were empty. The lobby was filled with people getting free passes, some of whom were strolling toward another theater. We had been in Theater #1. Theater #4 was scheduled to start the movie at 1. They had just now finally gotten the previews to begin. Everyone was crossing their fingers in hopes that the movie would be able to be shown, but they couldn’t guarantee it.

Of course that theater would be filled by now. It was a teacher’s work day and there were lots of kids available to go to the movies. But (after a bathroom break) (I know! I know!) I ambled into the theatre to see if I’d be able to find a seat.

Not only found a seat, but a very good one. This was much better than Theater #1.

Saw a couple previews, the last of which was for the final Twilight movie. Are they still making those? It was clear that the audience did not approve of things Twilight, and I had to laugh.

Then the screen reminded us of its parent corporation and without missing a beat, went into Hunger Games. Hooray!

Wow! What a great movie! Except that about thirty minutes in, my bladder berated me for those few sips of fruit punch. The tension just added to the excitement, right? And after it was all over, I raced into the ladies’ room and—do you recall the Tom Hanks peeing scene from A League of Their Own? I expected Rosie O’Donnell to congratulate me after I was through. Whew!

(And now that I'm home, my bladder is operating quite normally, thank you.)

I want to see the movie again, this time in a primo theater when I can relax and enjoy the details. I think they missed firing the cannon a few times there, that kind of thing. WRAL had a feature about the filming in which they said that Katniss ran across a waterfall near Brevard and had to be on some kind of rope device to pull it off. I don’t remember that from the movie.

The forest scenery looked like what I see from my house, except for the mountains and waterfalls. Every time Katniss fell or rolled down a slope I gritted my teeth. “Ticks!” I thought.

You should see the movie. It's a two-Kleenexer. You might be able to get through the goodbyes at the beginning, but when you-know-who dies, you're going to need tissues. And I think they cut out some of the epilogue. I'd check, but I've loaned my copy to someone. Guess they want movie #2 to really concentrate on the setup of their world and the beginnings of rebellion. (Though they began that here.)

Kids far too young to see the movie were in attendance en masse. One older kid sat behind me. "Kill him! Kill him!" he hissed audibly as Katniss battled a female opponent. 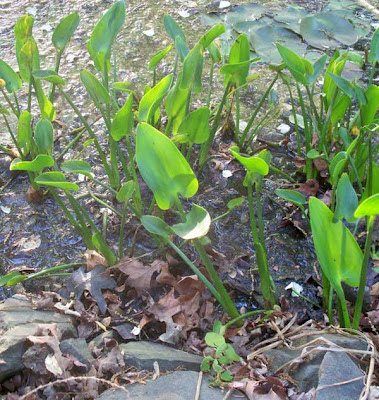 Hey, I found a quote I want to include: Jennifer (Katniss) (Did you know that “katniss” is the common name for the plant sagittaria, which is named after Sagittarius, who is the Archer? Cool!) Lawrence described the HG trilogy as holding up "a terrible kind of mirror: This is what our society could be like if we became desensitized to trauma and to each other's pain."

Exactly. I despise the desensitization we’re being exposed to these days. What do you think about that? Do you have another idea about what HG is?

Here's a great review by one of my favorite reviewers. And this one has some excellent points to make.

I also want to point out to those nay-sayers who preach that a female protagonist cannot helm a successful action movie: nyahh!
Posted by Carol A. Strickland at 8:52 PM

I adored the Hunger Games trilogy and have not yet seen the movie because life has been hectic. But I'm going this weekend, come hell or high water and I cannot wait. I'm glad you made it through all the trials to actually see the movie!

I don't know the books, but I enjoyed the movie, bar the (deliberately?) silly fashions. Love that Katniss fact!