Everyone should have one

Soon after I moved into my new home back in 1998, I had my friend, the septic field digger, come by and dig a pond. I'd had two ponds at my old place: one quite small and formal (it was my starter pond), and another pretty large, with a long series of waterfalls. On days the waterfall was turned on, the level of the pond could fall by as much as four inches. Not good for a place where the well didn't hold much of a reserve.

But this was a new place. The well was deep. This pond would be circular, about sixteen feet in diameter. But we had to give a lovely dogwood some room to spread its roots, and we ran into the outermost edges of the septic field on the opposite side and thus curtailed further digging immediately. As a result, the hole was heart-shaped.

I managed to sculpt in some ledges to put some plants on, and was quite pleased by the result. I added fish, and they multiplied through the years.

But dead leaves kept building up. Despite pigeons being able to walk across the pond, the fish still survived. I got the pond professionally cleaned. I set up netting every fall to keep the worst of the leaves out.

But eventually the fishies disappeared and my longing to have a waterfall increased. So I called American Aquascapes in Mebane, and they began the process. They "finished" last fall. 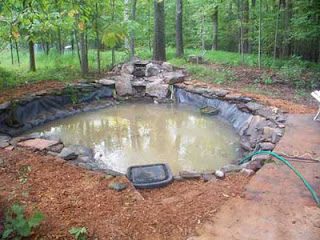 Um, this didn't look finished to me. I needed more rock, they said, and one guy gave me an estimate. Another guy told me the first guy always underestimated, and added $1000 to that number. I told them I'd give them a call the day after Tax Day 2013, and we'd finish it up.

Okay, there was a glitch in there (they don't keep good records, it seems, so the crew sent out was just to clean and not finish the job), so it wasn't until this week that the waterfall (and cleaning) actually got done. 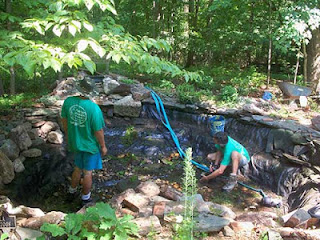 It took them a day to get everything in place. 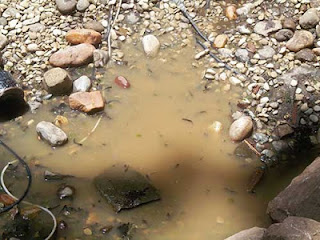 They tried to save as many of my tadpoles as they could. 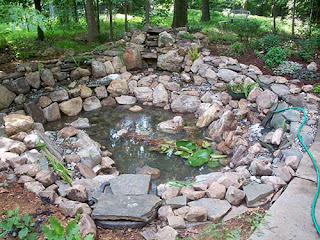 Since I'm on a well and don't want to run it dry, and because I have low water pressure, it took another full day to fill up the pond.

That was yesterday. Today I went over to get a couple more plants. The water hyacinths float and create the most gorgeous lavender blossoms! They multiply incredibly quickly, though, so you have to keep them under control. I tossed the new plants in, and they immediately got sucked into the skimmer. Now they are anchored to bunches of katniss (yes! Like in Hunger Games!), or sagittaria plants. The tiny white katniss blossoms and much larger hyacinths will look well together. 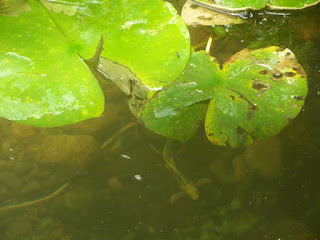 I also picked up my four free koi! After two years of being pet-less, I now have pets. They have to be fed twice a day. I went out a little while ago and couldn't find them in the crystal-clear pool. Finally I spotted one peeking out from under some lilypads. (The lilies look a bit ucky because of the construction. They'll bounce back in a week or so.) 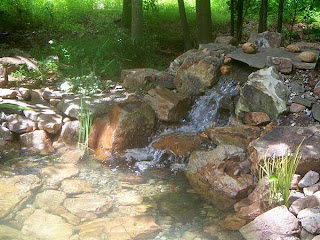 Thanks to some tree-trimming last fall, the pond now gets a fair amount of sunlight during most of the day. Before, it had been quite shady. But now it isn't, and I've been enjoying blooming lilies this spring.

The sound of the waterfall can be quite loud until you get used to it. After that, it's soothing. And to sit out there (on the bench cushion I just bought) takes you into an instant state of meditation. 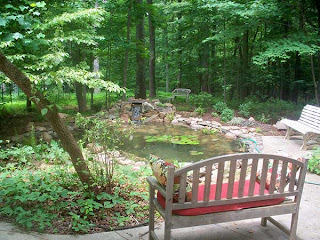 Like I said, everyone should have one!
Posted by Carol A. Strickland at 2:47 PM