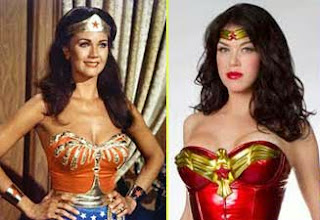 Things a WW Movie Should and Should Not Include

1. The basic concept of Wonder Woman: A woman. Not a caped man with boobs.

2. The actress who plays her should be chosen because she can ACT. There are lots of pretty actresses who can act, but not all pretty actresses can. Wondie doesn’t have to be the most beautiful woman out there. It would be so nice if she didn’t look like a cut-out Hollywood lead actress type. Male actors are allowed different looks; why not female?

3. She has abilities beyond those of normal humans, which have come about through Amazon Training, which she continually practices. Amazon Training is only partly about the physical. She has to train her mental and spiritual self as well. She has a few magical tricks here and there, a few industrial ones as well, but Amazon Training got her where she is. This way her powers remain within a woman’s control. (And marketing WW can expand to include all kinds of athletic goods.)

4. (What, you want the gods to give her instant powers, too? The gods gave a statue life. Isn’t that enough of a miracle?)

5. She EMPOWERS in a positive manner. This is her basic theme. She protects, yes, but she also helps people stand up for themselves. She aids the disenfranchised: women, children, LGBTs, persecuted/exploited minorities, the 47%, etc. Wonder Woman is not only a feminist, but also a humanist. She is not grim; she is delighted to see humanity advancing in so many wonderful ways, though it’s true enough, it’s still taking a lot of steps backward. She makes friends easily because she tends to think the best of people.

6. Therefore, a movie should not be about huge, faceless battles or quien es mas macho, but about PEOPLE. About characters and human situations. Instead of shiny explosions and non-stop action sequences whose only purpose is to shock ‘n awe, Wondie’s movie should reach into the very hearts and souls of her viewers and shake them awake, give their emotions a roller coaster ride before they emerge triumphant along with Wondie. Maybe they’re even enriched by the experience, maybe enlightened as to the human condition. You can still have awesome action sequences, but they should have layers of emotional depth to them.

7. Unlike the current run of her book and all too many runs before that, Wonder Woman should not find her legitimacy through the definitions given her by men. She is herself. Her culture is that of women. It is through that femaleness that she defines herself and makes her way through the male-centric world. She glorifies being female, and thus because of that, being human.

8. WW should have a solid reason for being in the world, and not just because she followed the first man she ever saw back into it because she fell in love. She should have a mission which logically follows her basis of helping the world in these very troubled times. It’s an emergency situation, this world we live in. She is going to help us.

9. Which doesn’t mean that Wonder Woman cannot love. She shouldn’t be shackled to one man, though, to keep her in her “proper” woman’s place. Not until she’s had the chance to experiment, try a whole bunch of different types, and make a reasoned choice. Which may turn out to be wrong for her, so she tries again. Romance does not take up the entirety of her story line.

10. The Amazons are a perfect society. Per the Perez (and WMM and others’) origin, they never rejected men, but were faced with building their culture without them through NO FAULT OF THEIR OWN. They have ancient roots, but have not stagnated. They have futuristic technology in many areas. They have a little magic as well. Their peaceful philosophy ("Gaea's Way") has made their culture healthy, constantly growing, and happy. As such, our exposure to the Amazons should be kept at minimal levels (like Earth was in the original run of Star Trek so Kirk could make his own hard decisions), because when characters are introduced within a dramatic structure, they must have that dramatic structure applied to them, which so often in the past (poor Hippolyta!) has meant that many Amazons have been made evil or mentally ill or stupid or just people you wouldn’t like to be around. Amazons are the rock beneath Diana’s feet, the solid basis for her life, mind, and purpose. Diana is the embodiment of Amazon-ness, but she is young; she is still learning it and growing into it. While empowering others, she is still learning to empower herself.

11. Diana worships Greek gods. Gods are not merely immortal capes. Gods are gods. They are personifications of nature and/or the human condition. As such, gods (or at least the Greek gods) can possess humans to deliver messages, or appear as humans (or animals, or showers of gold, etc.) to do same. Wonder Woman does not talk directly to gods as gods. The idea! She can see her gods at work in the world: Artemis as the moon, Apollo as the sun, Zeus’s thunder in a storm, Hestia’s blessings on a happy home, Hera’s increasing (positive) strength as women recognize their own power, etc. Diana could very well converse with such minor mythological creatures as nymphs, satyrs, and even a witchly sorceress like Medea. Herakles is still human enough to converse with.

12. Wonder Woman is not Superman. She can’t juggle planets on her pinky, or knock a skyscraper out of her way. She is mid-level, and can be injured from her efforts. She is not an instant-healer, though I’d suspect (and we’ve seen on occasion) that she has advanced Amazonian healing methods at her disposal. (But the Purple Ray is a cheating deus ex machina, and should be forgotten.) Battling is hard, tiring work for her. Unlike Supes, WW trains. All the time. She has learned SKILLS. (For some reason I often picture Diana close-fighting in Jackie Chan-style, utilizing whatever objects are close to her in entertaining, innovative ways.) WW’s mission is not to defend against attack so much as it is to prevent that attack from ever happening in the first place. Her first approach is reason, compromise and empathy. She will strive to help her would-be opponent reach a level where they can meet with like minds and find a win-win compromise. Her final approach is violence. She can also use violence when the attack comes on suddenly and there is no time for reasoning.

13. Wonder Woman is not Batman. She doesn’t just run around sorta fast and maybe jump a bit off hidden mini-trampolines to get things done. She has astonishing physical prowess, beyond what we’d think humans are capable of, but not remotely at Kryptonian levels. She also has thought out her personal philosophy so she knows just what lines she will cross and which she will not. Her mission is to help people, which means she also follows up because in her world, violence has serious consequences. Her goal is not to keep the threat at bay, but rather allow a wonderful future for people to enjoy in peace. If every other option is gone and the danger is imminent, she will kill, but the act will haunt her afterward.

14. Wonder Woman uses gadgets famous with the audience. The magic lasso, which makes people tell the truth. (Love the way it sounded in the recent TV pilot.) The Invisible Jet, which allows the non-Kryptonian quick transportation. WW may or may not fly. If she flies, it shouldn’t be super-fast because again, she is not Kryptonian. She may use Hermes’ winged sandals; she may not. She may levitate; she may glide on air currents using levitation. Quite often and unexpectedly I find people giving me the Amazon Salute, so this should be included. As should be the Spin, immortalized in the Lynda Carter series and gleefully copied by both kids and adults. Personally, I don’t believe in Diana Prince other than as a rarely-used deep-cover disguise for Wondie, but she can Spin into different costume variants as well (and increase the available action figure line). 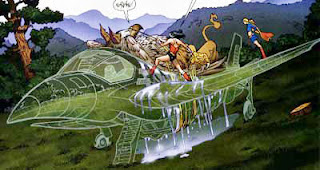 15. There should be no man vs woman conflict. Feminism is not anti-male. All men are not evil; all women are not good.

16. Wonder Woman has ancient roots, but is very au courant as she leads us toward a bright future. Yes, she should battle Nazis on occasion since they symbolize the opposite of what she does, but there are modern Nazis in the world. Many. Most don’t recognize themselves as Nazis (or similar philosophies), but some do. Wonder Woman does not have to be a creature of the past, forever stuck in WWII. She is the present. She is our future.

17. Wonder Woman can (and has!) operate/d in just about every genre known with panache, unlike the vast majority of her cohorts. Somewhere in a movie series (yeah yeah, we haven’t seen the first movie yet), we should see variations pop up.

18. Wonder Woman operates on a global level. Not just in the good ol’ USofA, or in Western countries. To her, humanity is one big family she is a contributing member of.

And there I’ve gone and ended this on a preposition. What are your absolutes for a Wondie movie?

Carol, you nailed it! I agree with you on just about every point! Can we please just write the darn thing ourselves? (I'm working a treatment that is coming along nicely.)

Love this... but I'll be pretty shocked if #4 particularly makes it into a Wonder Woman movie... I think WB has killed that. Fingers crossed that much of it even makes it back into the comic book. And I am more forgiving of the Purple Ray... Just out of nostalgia. ..

Boston, it would be VERY nice if I could make an announcement soon. We'll see. Piso, do you think a movie version would REALLY use that awful "daughter of Zeus" origin? But really, I can't see a modern movie studio NOT using some kind of instant powers when it comes to female super characters. (Then again, maybe they'll learn from Katniss.)

Carol,
IMHO:
#1,#2,#3,#4, #17, #18 exactly right, especially the point about her training for her powers. However, don't forget Athena, Aphrodite, Mercury and Hercules blessing her with powers as early as #1. Perhaps, instead of blessings/empowerments/powers, they could be more like predictions of her future? I miss the powered versions of the Amazons Perez and Potter did away with. Diana is the best Amazon (maybe next to Hippolyte?), but not the only "super-powered" one.

5. "She EMPOWERS in a positive manner." Not just the disenfranchised: I remember her changing the hearts of quite a few capitalistic bankers, men in power positions, etc. They need Amazon healing, too!

6.Right on! They can be both- I always liked Perez' balance that way- Lucy's suicide and then dealing with the Silver Swan, etc.