If you're reading this, you're likely here for the "Home for the Holidays Blog Hop." Click on the button above to visit the Romance Troupe website and see what the other stops for more recipes and book buzz are along the way.

WHAT, THERE ARE PRIZES, TOO?


Leave a comment with your email address on it to be entered into the Romance Troupe GRAND PRIZE GIVEAWAY!!!  First prize is $450+ (it depends on how many authors we wind up with) on an Amazon gift card or with Paypal cash. Wow! Second prize is 1 ebook from EACH participating author.

When you leave your email address, be sure to leave a space before and after the "@" or say "at" instead, so the spambots can't find you.

If you've never been here before, welcome! Herein follows one tasty recipe, a bit about a book connected (ever so slightly) to said recipe, and then there's an extra CONTEST FROM ME as well. Win! Win! Win! 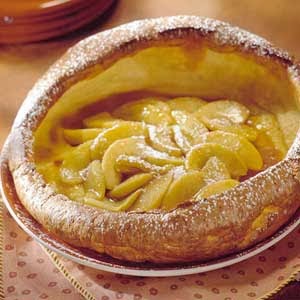 The recipe says this can serve as many as 6, but don't count on it. It's too yummy.

Preheat oven to 450 degrees F. Beat together the eggs, milk, flour and salt until very smooth. In a heavy 12-inch skillet, melt about 1 1/2 Tbs. butter. As soon as it is quite hot, pour in the batter and put the skillet in the oven. (I use a round cake pan for this, but maybe they want the pan being already very hot by the time the batter hits it, to speed things along. I've never had a problem.)

After 15 minutes, lower the oven temperature to 350 degrees and continue baking for another 10 minutes. The pancake should be light brown and crisp. Keep an eye on it.

During the first 10 or 15 mintues of baking, the pancake may puff up in large bubbles. If it does, pierce it thoroughly with a fork or skewer.

While the pancake is baking, prepare the apple filling. Peel and thinly slice a pound of apples. Sauté them lightly in 1/4 c. butter and add 1/4 c. sugar. Season to taste with cinnamon and nutmeg. The apples should be just tender, not too soft. About 8 to 10 minutes of cooking over a medium flame should be plenty. (The filling can be prepared ahead and reheated just before serving.)

When the pancake is ready, slide it onto an oval platter (or even a circular one, sheesh), pour the apple filling over one side, and fold the other side over. Serve at once, slicing pieces off crosswise.

This isn't just for breakfast. I think I got it from The Vegetarian Epicure, but don't make me swear to that. Keep reading to the bottom for another chance to WIN A FREE BOOK! 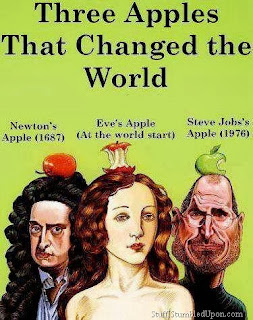 I had to learn a bit about apples—or more correctly, apple dishes—when I wrote Applesauce and Moonbeams. This is a humorous soft sci fi novel mostly based on the moon, where one family in particular owns dozens of large apple orchards. That's right, apples on the moon. Well, I think it could work!

I researched craters that were of a likely size that could be covered with domes and pressurized to make good, industrial-sized orchards. You see, this is one of the first crops grown on the moon, with the first seeds planted during early colonization days—at least in my future history. To get foods in from Earth requires expensive transport, so anything actually grown on the moon would become a staple.

Thus when people in the book were eating, I had to give them some likely apple dishes to dine upon. They couldn't eat the same thing all the time either, so that list had to be a fairly lengthy one. There's apples, applesauce, apple fritters, apple muffins, apple this and apple that. Luckily, this wasn't a cookbook so I didn't have to figure out more than a dozen or so.

And how about drinking? Apple juice, sure, but people like the harder stuff as well. I gave 'em hard cider... and mead. "Mead's not apple," you tell me, but mead is honey, and those apple trees aren't going to produce apples unless our starring family also raises bees.

Being apples, I had to throw in some Garden of Eden references as well, even though there are no serpents on the moon. (Unless you count Aunt Evie. Or Our Villain.) (And I won't mention how Our Hero's last name is a play on "Lucifer.") (Whoops, mentioned it.)

Applesauce's heroine's family were originally the Tangs. When they discovered they couldn't market their apple juice under the family name for some obscure legal reason, they became the Applegates instead. Our Heroine is Pippin, and her cat (featured on the cover) is the multi-faceted Jonathan. Both names are types of apples. 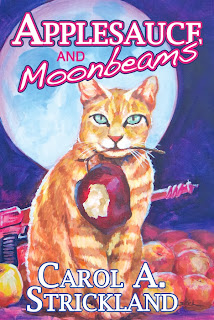 Pippin doesn't like the family business very much, but she's next in line to take it over. Instead, she's an artist—a very avant garde one who doesn't do anything in the traditional manner. Unfortunately for her, innovation is not welcomed by her society. Neither is her inability to maintain a proper look like the Fashion Police prescribe, or her growing tendency to get into trouble. She has only six weeks left to prove herself as an artist before her dragon of a great-aunt (see Evie, above) will force her into the company vice-presidency.

But now Jonathan the Cat is acting odd. In fact, Jonathan's begun to use her paints to spell out messages...

I hope you try (and like!) the book. You can go on Smashwords and get a really long free sample, unlike the short one at Amazon. Here's the main page on my website that points the way to different places and formats (it's in print as well) you can buy.

This is MY contest, separate from that of the Romance Troupe. Leave at least a name and your email address under the comments section to get email updates from me (I'll only do this once in a blue moon, so as not to annoy you), and be put in a drawing to get a free ebook! You'll be able to choose from any ebook of mine, even the newly-revised TOUCH OF DANGER, which isn't out quite yet, but will be released as soon as that famous-artist cover illustration is finished. OR if you don't want to post your email address here, you can go to my website, click on the "contact" link, and leave your name AND EMAIL ADDRESS there where things are so private Yahoo insists on putting it in my spam folder. I'll keep checking there, though. (Doing it that way won't enter you in the Romance Troupe's contest, though.) Heck, let's make it TWO WINNERS for this, okay? Final day to enter will be, ah, November 30.

Your list of apple dishes reminds me of Bubba Gump's expertise on shrimp. :) interesting theory about apples on the moon ... I could see it in a future world. Picked apples last quite a while, so they would make a good staple.

Oh, Dolly, I should have looked up Bubba's list and then made apple versions of them. It would have been so much easier!

Your book is already in my TBR pile, I'll have to move it up - sounds great! And so does the recipe - if only I could cook!

My mouth was watering as I was reading your recipe, must try it.
skpetal at hotmail dot com

Thank you so much for sharing your recipe and joining this giveaway!
melaniemcclure@knology.net

I love the recipe it looks delicious and thanks for the give away!

Happy Holidays. Thank you for the giveaway. esseboo@yahoo.com

Very interesting recipe. I never seen pancakes quite like that! :) Thanks for sharing!

thanks for the recipe bbyg612 at yahoo.com Kera Montgomery

Thanks so much, everyone, for stopping by! I'd never heard of German pancakes before I got the Vegetarian Epicure, but I stole the picture from a site that has dozens of 'em, and there's another person on the Blog Hop who has one as her recipe.

Thanks for participating in the blog hop!
eliseandtegan @ gmail.com

Thanks for the interesting apple recipe & the giveaway. Big Hugs

Loved your post... Apples are awesome as my 3 year old tells me lol. Thank you for being part of the hop love the recipe.

Thanks for sharing the recipe.. It is funny looking but sounds delicious.
JWIsley(at)aol(dot)com

I am drooling! I love apple s! delphinareadstoomuch at yahoo.com

I love anything with apple's in it! I loved reading about your research on apples. Thanks and have a Happy Thanksgiving!

Apples are such good fruit for the holidays! Thank you! Caraolson24@yahoo.com

Thank you so much for the recipe. I make potato pancakes without the fruit, so I will try this. Thanks for the hop and giveaway, hope you have a wonderful holiday season.
koala571 (at) msn (dot) com

Yum!
Thanks for the amazing giveaway!
elizabeth @ bookattict . com

Thanks for the awesome hop.
magic5905 at embarqmail dot com

I love apple anything.

That does sound delicious, and what a creative premise for a book. Making all sorts of apple dishes sounds like very enjoyable research!

Thanks for sharing the recipe and the chance to win!
natasha_donohoo_8 at hotmail dot com

That looks like a giant apple popover and I love popovers.

Thanks for the recipe and for your participation in the giveaway. I actually thought it ended already so I gave up. I'm now back at it.
Angela
angie1977t@gmail.com

Hi! Yum! That looks so yummy! They do kinda look like popovers and i could eat those things all day long! Have to get some ingredients and try this! Thank you for sharing and for the giveaway!! Happy Thanksgiving!
shadowluvs2read(at)gmail(dot)com

This was one of my favorite things that my mom made when I was a kid... although we called them Dutch babies for some reason. :-) thanks for bringing back a great memory!

Congrats to Sheri Vidal and Michele Bledsoe, my winners!