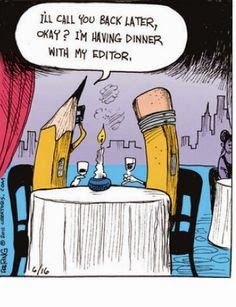 The other day someone asked a group I'm in if we could check out their new book, maybe review it. (Reviews are gold, remember that! If you have 10 reviews computer systems suddenly begin to recognize your book. PR opportunities might allow you to participate.) I went over to Amazon and though the price was low enough that I could see myself ordering the novel, I decided to check out the "Look Inside!" feature before I did so.

Good thing. From the very first sentence, the book was riddled with spelling and grammatical errors. I checked out the blurb: same deal.

That simplifies that. I don't read poorly-edited books.*

Editing is an unsung science. Let me sing about Anselm Audley, who has edited a few of my books this year and, if he can, please please, will continue to edit them. He's reasonably priced and isn't afraid to point out difficult problems. On occasion he'll even throw in a bit of line editing, like when he mentioned that jello is spelled Jell-O. Okay, so in the current wip I'm spelling it jello, but I'm using it in a non-branded form, as opposed to the volume he was editing.

An author will write a book and then rewrite and rewrite and edit and edit and edit. We get caught up in minutiae. Does a character get up from where he was sitting? Was he sitting? Is someone in his way, or does he have a clear path to go where we want him to go? Should we describe the rug he walks on? Is the need to establish the temperature of the room a true one or can we skip that? We know that he's getting up because as a child his teacher made him sit in his desk every day one hour more than all the other students had to. Have we brought that up? Does the reader need to know? Wait—he's suddenly in the other room. Did we forget to show him rising from his seat and walking there? Did we need that scene at all?

An author's creation does not exist entirely in their brain cells. Many times I've read commentary from comic book writers to counter criticism, talking about what they had in mind for a story and why the characters did what they did, etc. But what they had in their heads never made it to the page.

And if it's not on the page, it doesn't exist.

So a good editor will make sure that what's on the page is what belongs there. They'll  correct language usage so as to make things clear to the reader. It all boils down to enabling reader immersion in the story. Our reader cannot be allowed to come out until the final page of the book. All impediments to that must be dealt with.

So it's crazy important to find a good editor.

What kinds of editors are there? For our purposes there are five types: Developmental editor, line editor, copy editor, and proofreader. Whoops, that's four types. The duties range from seeing the book as a big picture with unfolding plot and character arcs, to figuring out just how one spells "minutiae."

This year I've been chasing after a goal: to reprint my existing books, to get my "Three Worlds" superhero fantasy series out up to volume 4, and to use professional editors, etc. in accomplishing all that.

Okay, Volume 4 will come out sometime around March, but that's not for lack of trying.

During too much of this year I had two books going at once: Applesauce and Moonbeams (previously published) and Stalemate, volume 3 of "Three Worlds."

I don't recommend anyone doing two books at once.

Anselm was busy with Stalemate (and getting in a minor accident in France, which left him woozy for some time) (he's much better now, thank you), so I went in search for a good editor for Applesauce. Another writer recommended her editor, who liked dealing with sf. I tried her out on one scene and she did a pretty good job (considering that it was one scene). We agreed on a price and I sent her the manuscript—in chapter chunks, which is what she requested. She did admit that this was an unusual way to operate, but it was how she worked.

Okay then. I was really busy by the time she began to send back chapters, and couldn't get to them immediately. But I wondered: how does an editor send back a manuscript one chapter at a time? I wasn't hiring her to line edit.

A couple days later I forced myself to take the time to read through what she had sent back, which she was doing with increasing quantity. She was already three-quarters of the way through the book.

I asked her why she was eliminating all my punch lines, especially the big one at the midpoint. "There are funny moments, but this is a serious, dystopian story," she replied.

Right. With pampered, telepathic cats, the terrifying fashion police... She said I couldn't come out to state that guns are bad because I'd insult many readers. Why didn't she stick around and put this statement together with that same character starting to buy guns, train with them, and rely on them for safety? She couldn't get that because she was taking this chapter by chapter, and not reading the whole thing through first to see where the plot and various characters' arcs were going.

At this point I fired her and only had to pay her for what she'd done, which really was quite unusable. Sigh. If I'd just read her stuff when it first came through I could have stopped her before she hit $100... 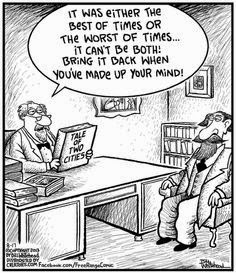 So I tried a service that had a staff of freelance editors. They were much more expensive, but by now I was desperate. I wanted this book out SOON. So I auditioned an enthusiastic editor, this one using an entire chapter to work on, and was pleased with what I got. He even had a very professional contract for me to sign.

Once again I didn't have time to look over his work when it first came through, but I did see that he'd sent the entire manuscript back in one piece. Yay.

But after I read through it all, there was only one thing I could change in the book: he corrected the spelling (I had not hired him as a line editor) on one word, and after I did some research, I discovered he was correct about it. In eight years the spelling will have changed to what I used, but at this particular moment in time, the old-fashioned spelling is the preferred one.

Other than that, his editing seemed the work of a high school student or perhaps college freshman majoring in English. He stated what he liked about the book, didn't have ANYTHING bad or constructive to say, and quoted a lot from Steven King's On Writing, which I have indeed read. (Along with a ton of other writing books.)

At the end he gave me a summary letter that said that now that he'd done his job, I should begin thinking about constructing a theme for the book. Also, I might be interested in line edits and other things his service offered. This did not seem like a summary to me; instead, it seemed like an ad.

I wrote him (and his service) back, demanding a refund. I referred to two big questions that I had posed concerning my books, clearly stated in our correspondence before he began. He had not addressed either issue in any fashion.

"That's because I had no problem with them," he replied.

I pointed out that my book's theme was blatant enough to hit over the readers' heads and leave a mark. Why did he think the book didn't have a theme?

"Well, I put in that point for other writers."

So it was some form response he'd sent me, disguised as a "summary." Again I demanded my money back. He counter-offered with free services, but I assured him that those services would likely be on the same elementary level as his editing, so I wanted nothing to do with them.

Eventually he gave me 3/8 of his fee back. Still I feel entirely ripped off.

Certainly I won't be returning to either of these two so-called editors/services. I can't figure why my acquaintance would be so satisfied with the first editor, since she was so awful.

The conclusion (dare I say "summary?") of all this is: If you find a good or even great editor, cherish them! And keep them to yourself, lest others steal their editing time! 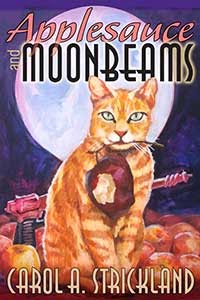 Yes, despite these editing problems, the book has come out! As of yesterday, ALL versions are available, although some sites may take a while to post the print version. It's up on Amazon. Check out the different places you can find it. It's $3.99 for ebook, $11.99 for print. On Smashwords you can download a significant percentage of the book to make sure it's what you'd like to buy. I think you'd enjoy it, but I may be predjudiced. Prejudiced.

---
*I've read too many manuscripts from wanna-be authors (and even published authors) that make it clear that they don't have a handle on basic English. An author (1) must have an entertaining story to tell and (2) must have the tools to tell it clearly. Today there are community colleges everywhere—even online—in which a wannabe can enroll for a few semesters and reacquaint themselves with proper English usage. If they have someone who will translate their story to proper written English, they can skip this step. But if not, they shouldn't rely on putting their words in the hands of an editor, even a good one, to make things right. Writers have a responsibility to get the basics (mostly) right in the first place.

Well, that was rather fascinating. I'm sorry you're having such rotten experiences with so-called editors, it's a pain when you can't even rely on personal recommendations.