You CAN Judge a Book by Its Cover 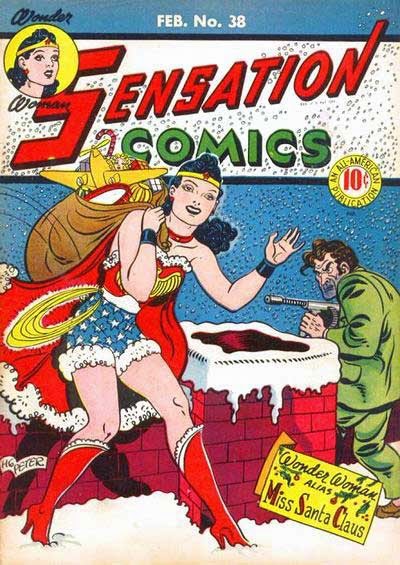 We're here to talk the BEST Wonder Woman covers. (You should be able to click on the pictures to see larger versions.) Now, she's had some good crossover, event and team covers, but I'm going to narrow the choices down to just covers from WW comic books.

Unfortunately, All-Star Comics #8, Wondie's first appearance, didn't feature her on the cover. But her Sensation #1 had a spectacular one! These were the days of H.G. Peter art, with all its vibrance. It was also child-friendly, and often showed both boys and girls having adventures with Wondie.

All-Star and Comic Cavalcade also had many iconic and kid-friendly covers, but these were team or anthology titles so we won't include those here. You can Google them if you want and enjoy.

Wonder Woman #1 had another iconic cover, full of life. Again, we were treated to a range of Peter covers that gradually allowed other artists to take over cover chores. Then we come to the post-Wertham era when Andru & Esposito produced covers in a more modern way. I love these covers; these were the issues I was reading when I was a young kid!

But oh boy, then came the Mod years! You all know that this is my favorite era. Not only did we get op art (it was the Sixties), but that marvelous artist and WW fan, Jeffrey [not yet Catherine] Jones, did two covers (middle, below) that knocked my socks off. They were so unlike anything that had been on a DC superhero cover before, and they were magnificent! Sekowsky's work is on the left in the group below (the issue appeared in the bus scene in the movie Midnight Cowboy), with Dick Giordano on the right. Those were days of great, POSITIVE changes at DC Comics. Pardon me while I heave a nostalgic sigh.

The Mod era ended and once again Wondie was a super hero. Her covers became a modern superhero type, very clean and eye-catching. Nick Cardy drew this one on the left below, and I love it dearly. Bob Oksner did the next, which I think is one of the best depictions of the Wonder costume ever. Then comes Miller/Giordano with a cover that was mentioned on Buffy the Vampire Slayer! After that is the final cover for Volume 1, a very powerful pose (though I think the anatomy's a little off) by Garcia-López and doesn't showcase Superman, unlike the final cover for Volume 2. (Bleah!)

Volume 2 dawned with a jaw-dropping cover by George Perez. You could always rely on George for clear and exciting covers, like issue 3 down there. But there came a time when Wondie's book was graced with a long series of covers by the magnificent Brian Bolland. Oh my! They were FABULOUS. It was difficult for me to pare the list down to a few. I might have left #64 down there off, but that innocent little girl saying, "Bang!" as the gun was firing shocked me to death when I first saw it. Still does.

The second one below, #72, is one of the all-times, isn't it? It even made a good couple of statues from DC Direct. Next to it is a cover that always makes me chuckle, when Diana dared to take on the Boston mafia, eye-to-eye. She scared them spitless! The final cover there, #82, shows the threat of Ares magnificently, doesn't it?

More faboo covers by Bolland appeared on the book, but eventually he left. Garcia-López drew the marvelous the "face month" cover for #128. (All DC's titles had big faces on them. It was an experience visiting the comics store.) Then came AH!, Adam Hughes, a superb artist who unfortunately often has no idea of appropriateness, especially when dealing with a feminist icon like Wondie. Still, look at these last two covers, especially the Diana-talks-to-Lois one (WW #170), and marvel.

I'm going to stick Hiketeia in here because I have other covers grouped. Yes, it's not a comic book, but it is a graphic novel, and that is one eye-catching cover, isn't it? It's by J.G. Jones. It's been utilized for a number of LOL memes.
Now we're finishing up Volume 2 with two AH! covers. After issue #172 down there, is a very funny one that plays off the story of Diana going back in time. We see the modern WW as well as the original Golden Age version.

Then Volume 3 began, tipping us over to a new slant of Wonder Woman that wasn't THAT far off from what had gone before. Terry Dodson did the cover for #16, which held a great little story, and Aaron Lopresti, one of my all-time favorite WW artists, did the cover for #25, which has a bit of a Golden Age feel in that it reaches out to children.

Finally we come to the last issue of WW that DC published. (I don't recognize newer issues. Well, maybe one. Or two. For all intents, DC laid Diana to rest in June of 2010.) Adam Hughes returned to do a variant cover that saluted Sensation #1. So nice.

#72 was the first cover that I loved upon seeing it for the first time. Loved it so much, that I bought the statue that is based off the cover.

All great images and it'd be easy to add a few dozen more. On true Wonder Woman style, I shall restrain myself - I offer you:

WW #284 A dragon stalks the streets

Bianca, the "Gods of Gotham" cover is indeed a good one. I left it out because (1) excess boobage, and (2) the story inside, which really shouldn't have anything to do with me liking the cover or not. I'll be doing a "Why do they keep comparing Wonder Woman to Batman?" blog soon. (Really: why?)

Mart: Oh yes, that WW for President is a classic of the first sort! It should be here, my bad. #184 is striking as well, and covers the second half of one of my favorite WW stories. #205 is also a classic, but it's been used for all too many "Wonder Woman tied to a penis" jokes that have soured it for me.

The Cheetah cover is extremely eye-catching, as is the dragon one. Don't know why they don't inspire me enough to put on a "best cover" list. Could be the stories inside, which see above, shouldn't count when judging covers. Or perhaps I merely needed another cup of caffeine when compiling this list to get the correct brain synapses involved!

*SIGH* Looking at these covers makes me pine for Wonder Woman. At least the new Sensation Comics allows her to live on - like you, she's dead - that's not Diana in the New 52. There was actually a story that featured NuDiana that made me like her; it was written as WW should be written. However, she didn't have a sword, blood on her breasts, or "Superman" beside her, so it may not have been her.

In any case, seeing the real Wonder Woman/en in these amazing covers makes me realize that I can still read past issues and feel the wonder without being so down of her modern day treatment. Thank you. :) (Oh, and you are awesome, Ms. Strickland!