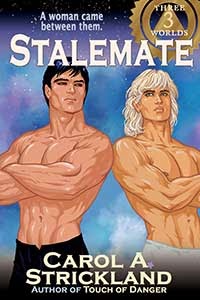 On Trial for Her Life... And Her Heart!


Lina O'Kelly, psychic and interstellar transporter, is finally reunited with her love, Londo (Valiant) Rand, the galaxy's most powerful parahero. He was forced to leave her on their wedding day, but their reunion is bittersweet. He brings news of a hero's death, and then cannot stop a formal inquiry into the charge of mind control that the Mega-Legion commander has leveled against Lina. She stands to lose her very mind if the judgment goes against her.

No matter which way the trial goes, they both carry secrets that could tear apart their new relationship. Jae (Neutrino) Rallene, the last of his mysterious kind, holds the key that could seal Lina and Londo's happiness... or keep them separated forever.

Lina got up to leave. “Here, let me show you,” Londo said, quickly swinging his chair around as she went out the back. He put his arm around her and she eased it away from herself. The door to the cubicle closed behind them. The balcony outside was empty.

“Do I have to break through this again?” he asked sharply.

She looked past his cheek, not at him. “Lon, we need to talk. All these interruptions aren’t helping at all. I am trying to put things on hold until we can find some privacy. Please don’t push things until then.”

“Push things?” He pulled her chin up, but her gaze would not come around to his face.
“Baby, do you remember a few days ago? A little wedding ceremony? And a couple days before that? ‘I’ll love you forever’? Where are they now?”

“Is this private enough to talk?” At last her eyes met his, but hers were blazing green. “Do you want to have our discussion here? In the open? How many cameras are on us?”

“There are no cameras,” Lon said, and somewhere below them a cubicle door opened. They stood still as Boroh stepped out, moved down the hall and through another door. “So we’ll make it—”

His ring buzzed. “Londo, I see neither of you are in your cubicle. Have you both lost your way?” It was Wiley.

“We’re just trying to have a private conversation. Give us a few minutes.”

“Don’t upset her. I don’t want anything to interfere with these readings. Electrolytes must be perfect.”

Londo frowned and his frown became deeper when he saw Lina striding off in the direction of Wiley’s cubicle. She had to look at the door labels. He trotted to catch up. “Damn it, Lina! I’m trying to get all this straightened out, and you’re running away.”

“Let’s just drop the whole thing until later and be professional about it now, okay? Neutral.”

“Neutral?” Londo took her roughly into his arms. “Is this neutral? Is what we’ve been doing, what we’ve been feeling toward each other, neutral?” He pressed his lips on hers, holding her head so she couldn’t get away.

She didn’t kiss back. Instead, she pummeled his shoulders with her fists.

Lina finally freed herself from his mouth but he still gripped her in his arms. “Do I have to slap you again?” she demanded. “Have you go back there with a big red mark on your face? How will you explain that?”

“I don’t need to explain anything.”

“I think you need to explain a helluva lot!”

“I think that you already knew. You’re the big telepath around here. How is it that you don’t know everything?”

Her mouth worked before she could speak. “And you’re the big parahero with the big reputation. How is it that you can’t tell the truth when it really matters? How is it that you like to hurt others just so you… so you can keep them under your control?”

“Says the woman who can read minds.”

“Is that going to be your excuse from now on? Not telling me anything and then saying that I should have known? Am I supposed to scan you every time you tell me something important? Or are you going to lie to me about the little things as well?”

“Some people would be intrigued by this, Lina. I thought you would be. I’m disappointed in you.”

“Disappointed?” The word hit Lina like a knife, echoing her father’s words: Clumsy, stupid girl! You should be ashamed of yourself! She turned her head from him. Break away; run. “I don’t want to talk about it now,” she told him, blinking hard.

“Hide from it, like you do everything else?” He shook her.

“And you just… assume that you can drop these thunderbolts and I won’t say anything about it, that I won’t question it because you’re team leader. The great and powerful Valiant. No one questions Valiant on anything! Lon, how could you lie to me like that? Have me make a vow when you hadn’t told me the truth?”

“This has nothing to do—”

“This has everything to do with that! Can’t you see? This is the very foundation of what we are, and you’re, and you’re—” She choked. “My god, what have we done?”

Jump into the galactic adventure here!

Sign up for my newsletter (top right of this page) to get a SECRET CODE for a FREE copy (your choice of e-format) of Touch of Danger, vol. 1 of the Three Worlds Saga.
AND come over to my Facebook Pro Page because within the next few days I'll be posting about a CONTEST in which you could win an Amazon gift card!