Forget those AWFUL, PUTRID Steve Martin movies! They are zero, nothing, nada like the original book! 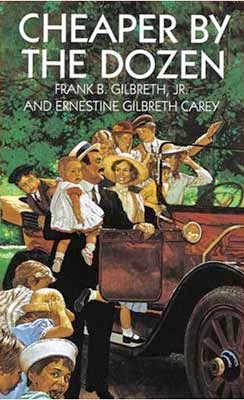 What book? Cheaper by the Dozen, by Frank B. Gilbreth, Jr., and Ernestine Gilbreth Carey. (Illustrations on the first printing, which I show here, were done by Donald McKay.) (That's right; I stole my parents' copy of the book and kept it for myself!)

The Steve Martin movies showed an inept father of 12 whose lesson to be learned in the first movie (I haven't had the stomach to watch all of the second one) was this: Children are king. Whatever they want, the parent should provide, no matter what the dreams the parent has to give up to achieve that.*

Phooey! Frank Gilbreth would have had a fit!

Frank and Lilian Gilbreth were industrial engineers, the first to do motion studies of various professions. (Look 'em up on Wiki for some fascinating facts.) Their firm operated from 1910 until 1924, when Frank died. After that, Lillian, who was also a psychologist, took over the business. But this book isn't about the business, it's about their family. As the dedication reads:


Frank, who was crazy about kids, wanted to see if the improvements he'd made in industrial efficiency could work in a familial setting. (He also knew he had health problems and wanted to make sure the family would survive well without him.) So from the birth of his first child, Anne, he began experimenting.

He asserted that baby monkeys could function at advanced levels compared to human babies, and tried to get Anne to, for example, learn to swim while she was still an infant. Oh well, that didn't work, but other things did.

The family grew, gaining 12 kids in 17 years. (Poor Lillie!)** The Gilbreths instituted family councils, sealed bids for household jobs the kids could do in addition to their regular chores, and such things as learning from language records during "unavoidable delay" (using the bathroom).

The children buried coffins of pencils for advertising newsreels, helped develop the touch typing system (aided by sharp taps of a ruler to their heads when they made mistakes), and they lived in fear of a younger sibling skipping a grade to land in their class.

If one got sick, they all did, and set New Jersey health reports suddenly skyrocketing. There's one section that deals with the kids' tonsils coming out. For some time Frank had been wanting to capture multiple identical operations on film so he could teach doctors how to operate quicker. Now all but one of his kids needed tonsillectomies. Perfect! He decided to have the operations done at home while a cameraman filmed everything.

I'll let you discover what happened along the way.

The Jazz Age arrived just in time for the older kids, three girls, to be in high school and dating. Bobbed hair, nylons, short skirts, stripped-down Model T's, and greasy-haired collegiate sheiks made Frank Gilbreth's blood pressure skyrocket. Still, he and his wife managed to muddle through and even enjoy the process—a little—along the way.

The ending is sad, but the rest of the book is great fun. There's a sequel, Belles on Their Toes, that I read ages ago and recall that it seemed a bit repetitive. It did mention that Mary, the second child, had died at age five of diphtheria. At Lillian's Wiki page, I discovered that there was also a stillborn baby girl in the Dozen (which was always referred to that way, though after Mary died there were only 11). The eleven Gilbreths who survived childhood ALL graduated college (imagine!) and lived long lifetimes, like their mother. You can read more about the family at this website or here.

Because Amazon is offering the book at only $1.99, I bought it just because, and discovered that Ernestine had written an introduction to the book (which maddeningly listed the questions people most often asked her, without giving any answers), and that there are photos at the end of the book showing the family back then and as time went by. The 1923 photo includes them all, and sure enough, all the girls have bobbed hair. There's another picture from the 80s with Frank Jr. and three brothers, but the brothers aren't named, darn it. The 1920 picture of Frank Sr. and Lillian doesn't show Frank as being nearly as large as the book paints him. Don't know if he was having a good year or if the book was just using literary license. (This could have been the point at which he began slimming down on doctor's orders.) 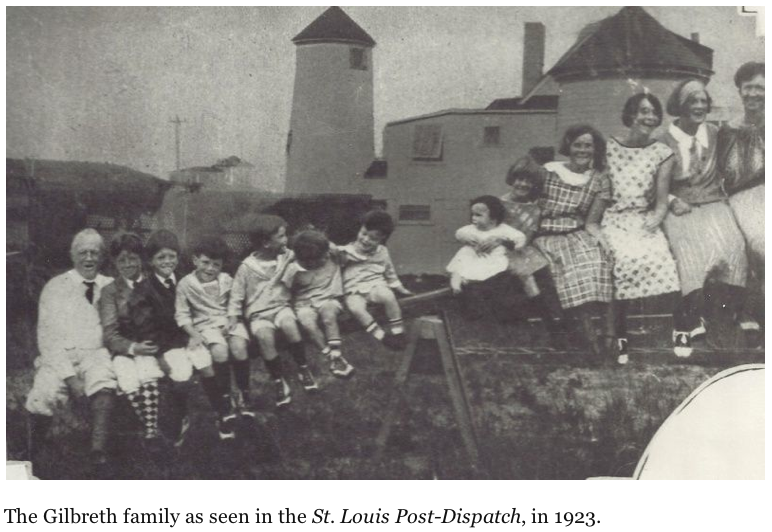 The main point to take in is this: you'll enjoy this book enormously! In addition to being a memorable family comedy, it also shows the transition society made moving into the Twentieth Century and celebrates that rarity of the time: a professional, educated woman. If you haven't seen the 1950 movie with Clifton Webb and Myrna Loy, save it until after you read the book. There was also a 1952 movie, Belles on Their Toes. Audible has an audiobook of Cheaper, and the sample sounds pretty good.
_____

*It also showed that you can dream up a book, write it, get it published, and become a best-selling author within the space of something like 3 months. Riiiiight.
**Make that 13 kids in 17 years, counting the still-birth daughter. Lillie also birthed all those kids at home, except for the last one, Jane, whom she had at a hospital. Lillie came home wondering why she hadn't done that before, because it had been such a pleasant experience.
Posted by Carol A. Strickland at 2:00 PM

Labels: cheaper by the dozen, gilbreth