I recently joined the Scifi Romance Group on Facebook (they spell "Sci Fi" differently than I do) and today is a day to advertise our books via blog posts. So here I present a tease of Applesauce and Moonbeams, which isn't Sci Fi Romance but rather Sci Fi with Romantic Elements. Yes, there's a difference. Ah, categorization!

Let's set the stage: Our Hero has been in a battle that ended on the Lunar Express, a shuttle going from Earth to Luna. Unfortunately (actually fortunately, or I'd have no plot), he lost that battle and has collapsed into one of the passenger sleep pods. I'll let Pippin take it from here... 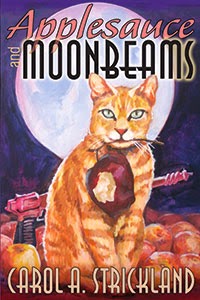 How odd. Pippin had expected to wake up brimming with unbounded zest, free from the crushing gravity that had been Earth for the past six weeks. She should be home: back on Luna.

This trip had left the rest of her life hanging and her nerves shattered. They had already been stretched thin as a plastic sheet. During the past six weeks that plastic had been pulled and distorted, finally snapping into shreds by a lack of time and more gravity than a human body was ever meant to bear.

What she needed was a long vacation. What she faced was the most important deadline of her life.

Now at last she could pick up where she’d left and get on with everything. She’d have to do so at a dead run; her schedule was squeezed unbearably tight. Instead, she found she literally couldn’t move. Was some fear of failure immobilizing her? Or worse: artist’s block?

I should have refused to go to Earth, she reminded herself as she put up faint struggle to open her eyes. She thought she’d left Earth behind four years ago. But poor Jonathan. He couldn’t have lasted much longer without Terran help. And of course, poor old Aunt Evie anxiously waited for him at home.

Evie certainly couldn’t have survived the trip, so Pippin had put her dream on hold for six weeks. Forty-two irreplaceable days. She’d accompanied Jonathan throughout his ordeal, and had now brought him back home. She hoped he appreciated her sacrifice. She knew Aunt Evie didn’t.

Her time was her own again, but time now ran oddly. It was dark. Oh yeah, she had her eyes closed, but there didn’t seem to be any light on the other side of her lids. Open, open, open, her mind commanded, but her mistreated body groaned, Five more minutes.

She still felt heavy, though maybe half or a third as bad as the horror Mama Terra had been. Not only heavy but a tad claustrophobic. She squeegeed the sleep-slime in her mouth with her teeth, trying to taste what the problem was as her senses slowly awoke. Ew, got some hair in her mouth. She spat it out.

It was really quiet in here. Funny odor; guess that was the plastic sleep suit they made her wear, with its plumbing and sensors and everything. It really smelled icky. More than ripe; kind of rotten, like when they brought in a big batch of manure from the Luna C waste facility to receive its final rounds of sterilization. That couldn’t be her, could it? Ew, ew. Never!

She must be still in the sleep pod. Cocooned to withstand the hard acceleration that powered the Express, it fed her enough drugs to keep her unaware of the day-and-a-half ride. The faint sounds she made as she squirmed echoed back to her, reminding her of how tiny it was.

People weren’t supposed to wake up in their pods, were they? Had something catastrophic happened? She started throwing off the drug effects at that thought. Was there something wrong with the ship, that the sleepers had been awakened prematurely so they could deal manually with the emergency—or at least say their final prayers?

Meteoroid collision? Crew decompression? Was no one left at the controls?

Maybe some glitch had cut off her nutrients or, God help her, her air, and some keen animal instinct had snapped herself alert so she could jump up and—

Not bloody likely, with this weight pinning her down.

Funny, it didn’t extend to her arms or hands. Her left foot also seemed to be free of it. Still, it was... well, something. An object of some kind, a smushing load, a—

She scrabbled her free fingers, searching for some kind of help button to alert the staff. There must be a help button. And a staff that was awake. Please, God, a— “HAAAAAALLP!” She ended it in a pure, unadulterated screech guaranteed to penetrate six inches of solid steel if need be.

Suddenly it occurred to her that her screams might use up all available oxygen.

Excited voices penetrated from the other side of the pod. She shrieked as loudly as she could: “Dead! BODIEEE! Lemme out! Lemme OUUUUT!!!”

For the first time in her life, Pippin Applegate fainted.

---
Hope you liked that! You can find out more about this book here, including buy links. (It's $3.99 for e-book.) (And darn it, even though it looked perfect the other week, I see I have to nudge the type on that webpage just a tad once again. It never ends, does it? Siiigh.) And remember, if you sign up for my VERY infrequent newsletter at the top right side of this blog, you will get a FREE e-copy of Touch of Danger, vol. 1 in the "Three Worlds" series!
Posted by Carol A. Strickland at 9:40 AM