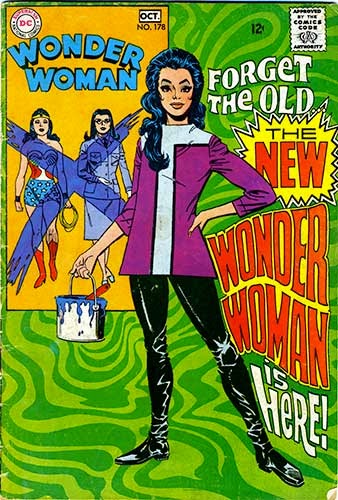 In the past two months I’ve seen numerous articles (even a film!) about Wonder Woman that disparaged her Mod Era either in passing or at length.

Obviously, the authors didn’t know what they were talking about.

Wonder Woman’s “Mod Era” in which she gave up her powers and functioned as an extremely skilled and human being, began in issue #178 (first volume), Sept-Oct. 1968, and ended in issue #204, Jan-Feb. 1973. According to primary editor/writer/artist Mike Sekowsky, "We are not kicking a winner... -- the Old Wonder Woman was a loser -- she was a loser for so long the book was going to be dropped as a matter of fact. The sales figures on the new Wonder Woman now make her a winner…."

Wondie had been hit hard not only by the death in 1947 of her creator, William Moulton Marston, but by Frederick Wertham’s Seduction of the Innocent, in which Wondie was accused not only of being a lesbian but being into BDSM—and attempting to preach those ideas to the kids who read her books.

Well, yeah, but she also had a boyfriend who was often by her side in her adventures and a significant proportion of that bondage was there so she could break free of it not only physically but metaphorically. Still, National Periodical Pubs./DC Comics had to make some tweaks on the Wonder mythos so that parents could be assured their children could read the books without “harm.” (Cue the “Spartacus” auditorium scene of In and Out.)

So Wondie became kind of obsessed with Steve, who in turn became rather controlling and scary. Wondie couldn’t go after villains directly anymore—that would be unfeminine—so she dared them that she couldn’t accomplish incredible feats. Invariably she did, so the villains then dutifully trotted off to jail to fulfill their half of the bargain.

To fill out the books, then-writer Robert Kanigher concocted the “Impossible Tales,” stories in which different-aged versions of Wondie teamed up for “family” adventures. As that series went on, the “Impossible Tales” label was often left off introductions, or the introductions made no sense at all, so that the Wonder Family: Wonder Woman, her mother (“Wonder Queen;” how regal she was!), her sister Wonder Girl (I adored her!), and toddler little sister Wonder Tot (squee!), were all a real family. (Some of us readers came from dysfunctional families and loved when we were exposed to stories of families that actually loved each other.) When DC decided to cash in on the teenaged craze, Wonder Girl signed up for the very first adventure of  the Teen Titans.

But even if WG’s popularity was such that she took over the cover for two issues (with her logo being the prominent one), that era too ran out of steam, and Kanigher introduced the “Return to the Golden Age.” He subsequently APOLOGIZED (!!!) in a lettercol for subjecting his readers to this ghastly era. 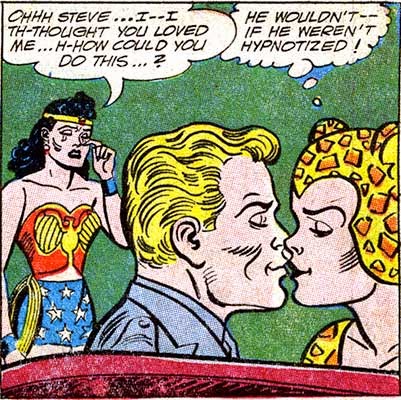 After that DC suddenly realized that Wonder Woman was an actual superhero, and gave her superhero-type stories of a Silver Age kind of feel. She teamed up with Supergirl twice and both times had to suffer through a romance-driven plot because you know: they’re chicks. Chicks are only good for romance stories. (How I wish the Supergirl writers could have read a few issues of the new Ms. Marvel to see just what a female teen superhero can do! Let’s throw in PAD’s run of Supergirl as well.)

So this is where we were when sales bottomed out on the book.

And this is what Mike Sekowsky (and some others) gave us: 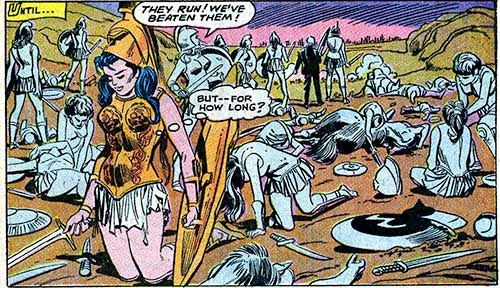 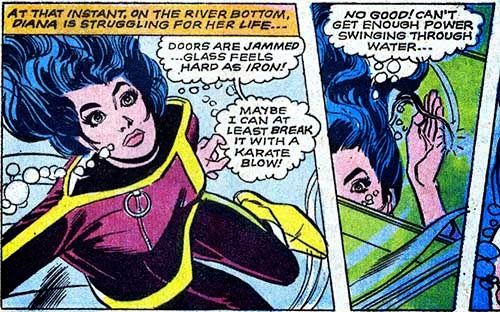 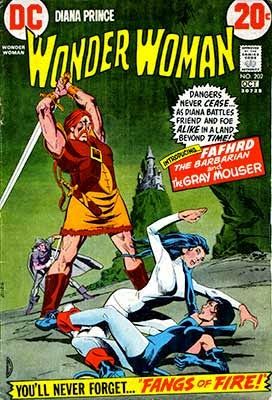 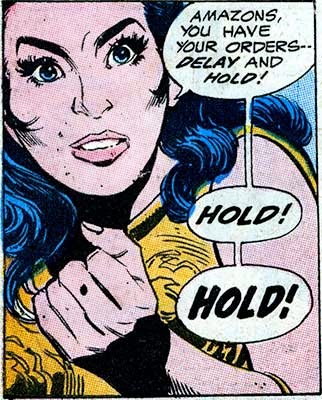 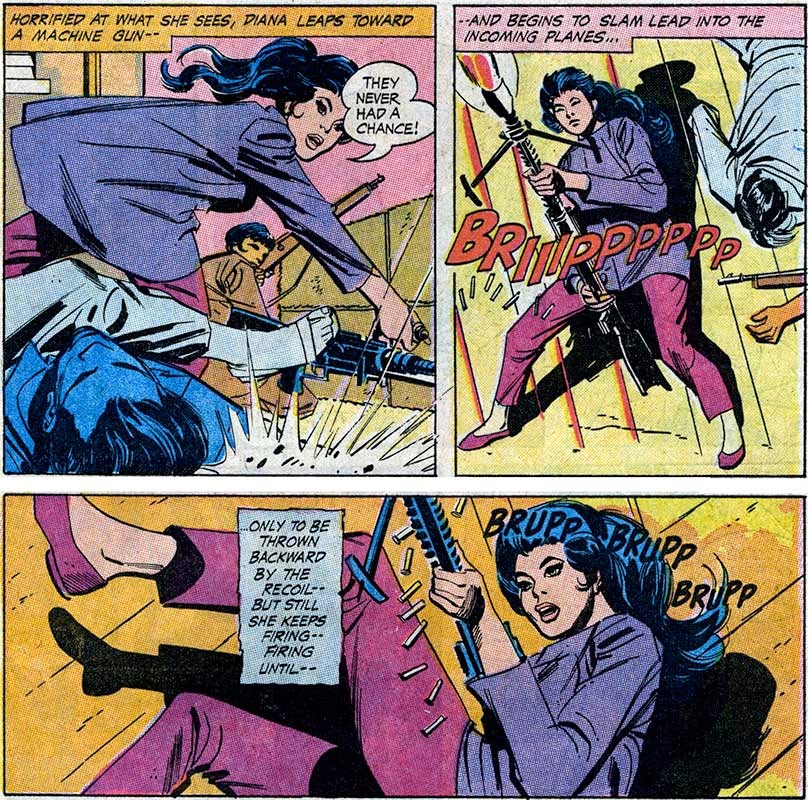 After the Mod Era, we got a handful of issues with the intriguing Nubia (who was never seen again [save one issue of Super Friends] for decades), and then Kanigher once more gave us a kinda-sorta Return to the Golden Age, this time with incredibly sloppy art featuring lots of buxom women and stories teaching kids that men were evil, while women (especially women who didn't admit men to their ranks) were good. The stories may have had slightly modern settings, but they were the same old dreck he’d shoveled at us before.

Then by some miracle (Kanigher was gone!), Wondie rejoined the Bronze Age with the Twelve Labors storyline, a semi-solid set of superheroic tales. After that, it was all standard super-stuff for her. But if it hadn’t been for the Mod Era, she wouldn’t have been still a DC character. Her series would have been cancelled, and rights would have reverted to the Marston family.

And I would never have fallen in love with the concept of Wonder Woman. It was this panel that cemented it all for me:

Not just one character, but WOMEN, plural, women with few if any powers, standing up to Ares and his army! They were all strong-willed; they were all beyond competent. They trusted and followed Diana. I’d never seen ANYTHING like this in my life!

So tell me again how the Mod Era sucked. Let’s step outside, shall we?

Want to know more about the Mod Era? Of course I have an index! It’s here. You can waste a lot of time reading it. 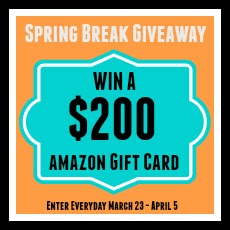 CONTEST!!! Yay, it’s another contest, with $200 gift cards available to be won. Go here to enter. The contest runs until April 5th. Good luck!
Posted by Carol A. Strickland at 2:00 PM

Carol, several years ago I bought the Showcase Presents Wonder Woman Volume One for my girlfriend. Reading those issues from the late 1950s and early 60s, while I did like the artwork by Ross Andru & Mike Esposito, I was rather underwhelmed by Robert Kaniger's writing. They just seemed sort of pedestrian compared to the bizarrely entertaining & imaginiative comics that William Moulton Marston & H.G. Peter that I'd read in a couple of the Archive volumes and other collected editions. The worst part of Kanigher's writing on Wonder Woman was Steve Trevor, who was such an annoying sexist jerk who was constantly badgering Wonder Woman to marry him, and scheming to trick her into having to tie the knot. So, yes, I can certainly understand your argument that the Wonder Woman series was in a creative slump prior to Mike Sekowsky & Denny O'Neil seriously shaking things up with the "Mod Era." It may have been controversial, but it also got people's attention. So thanks for an interesting reappraisal of this controversial era. I'll have to take a look at these issues again and see what impressions I have of them this time.

Thanks! I was in high school during the Mod Era and was bowled over by how exciting Wondie was. Let's face it: the entire DC line was trying new things at the time. You never knew what they'd throw at us next. The Mod Era treated Diana as a unique character within the DCU, something one never saw too often from then on until the post-Crisis era. She was just another super-hero.

The stories that celebrated her for her classic theme at levels deeper than surface ones, were few and far between. The Mod Era didn't deal with the theme of Diana teaching the world positive empowerment (= classic theme), but rather, it showed how she turned the theme upon herself. I think that counts as being true to the WW heart.

Mike Sekowsky could be such a hit and miss creator, but his work during the Mod era is really some of his very best work. Fun writing mixed with inspired art, with just a dash of insanity thrown in made for a good time. Yeah, I wasn't always nuts about "I-Ching" and a few other bits. BUt over all it was a great run and easily makes my top ten Bronze Age series.

I love that same panel, and I'm a guy! My copy of that issue is old and tattered, but I'm not parting with it!