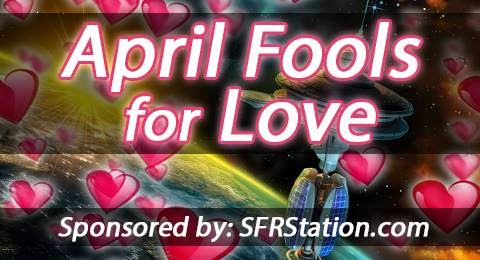 It's no April Fool! Science Fiction Romance Station is having a blog hop starting today and lasting all month, to highlight our authors' characters'  goofiest moments when it comes to love. And you know what?

We're giving out prizes! Good ones!

But I'm not telling you about them until the end.

I fretted over which scene to use for this installment, and decided on one from Applesauce and Moonbeams, because it was the only one I could think of that didn't contain many spoilers. What you need to know before reading this: Our hero, David, is a telepathic psychiatrist from Las Vegas who specializes in teaching people to fit into the uncomfortable niches their futuristic society requires of them. Now his mind has been blasted into the head of one very pampered kitty cat, Jonathan, who lives on the moon. So David is now a moon cat. His owner's niece, Pippin, is an avant-garde artist who has been celibate for far longer than she has wanted. No, there's no bestiality. Sheesh! Pip invites a fellow artist, Sevan, to her studio one day. David's been subconsciously trying to communicate his situation to Pippin, enough so the name "David" comes to her mind. Oh, and the "snake bites" are decorative cosmetic patches that prevent skin wrinkles. The Nineties, Teens, etc. numbers indicate different body types. Let's join the action:

It was all too chummy for David. He’d trotted in after them, weaving his way between Sevan’s feet until the man had to stop to let Jonathan lead the way. Instead, David stopped as well, even sat to lick his shoulder, until Sevan forged ahead. Then it was back to the weaving.

“Nice cat. And this is a great space,” Sevan said after an awkward pause. “Do you mind—?” He gestured at a table next to the modeling stage and she began to clear her equipment off it.

“Part of it was a farewell gift from the folks on Earth,” she told him.

That got them talking about their families back home. Sevan pulled materials out of his bag: a lazy susan with two blocks of gray Insta-Klay, a pack of armature wire, and sculpture tools whose edges looked part kindergarten and part lethal.

David didn’t like this guy. He didn’t like the way he moved: like a clumsy, well, human. And he smelled funny. David half-listened to Pip’s story, though it should have fascinated him through enlightenment gained. Why, when Pip’s family had insisted she study marketing at university, she had maneuvered them into a deal guaranteeing her a double major that included fine art. If that didn’t reveal the soul of a true businesswoman, what did?

But Sevan didn’t understand. He was interested in other things besides saving Pip’s soul and forming her into a useful and content member of society. At the least he should reiterate what she said and restate it so that she knew he was hearing what she had to say. He needed to establish emotional feedback if he was here for what David thought he was here for.

David hated Sevan’s holographic snake bites. They were too flashy and bespoke a huge ego. Well, Nineties as a rule had ego problems, didn’t they? The opposite of Teens, Nineties were completely sure of themselves because of their dominating size and often adopted flashy accouterments to finalize the business of attracting mates.

Snake bites should be muted so you could focus on someone’s features. Pip, of course, went all the way with hers. They were skin-colored. When she smiled, you saw the smile and not the flash of silver or magenta attached to the flesh.

David blinked at her. On her it worked. Rather endearing, actually. The snakebites on that low-make face were a way of telling the world that she was not a woman to fake her way through life.

The two humans wrestled a tapestried chaise from one of the front rooms up onto the low stage. It was purple with bright daisies woven into the fabric. As Sevan rotated the stage, Pip took a seat. David jumped up onto Pip’s lap and nudged her so she’d scratch his chin. He leaned into the caress. Sevan set up lights whose brightness Pip directed by vocal control.

“Good enough,” they decided together. Sevan took a position by his Klay.

Pip set David down on the main floor and stood up. Then she slowly dropped her robe. Underneath it she was naked.

Sevan took a step back from David. “Does he bite?”

Pippin frowned at David and then turned a warm smile to Sevan. “He’s just angry because I stopped petting him.”

David stormed to himself as he paced back and forth. This was not going right!

Pip settled upon the chaise like the Queen of Sheba, all temptation and womanliness and control.
Sevan made some suggestions as to pose and gesture and Pip complied, snuggling back into the cushions to get comfortable. Sevan moved his primary light and stepped back, then—

Don’t TOUCH her! David wanted to scream. He trembled where he stood as Sevan arranged Pip’s arm so it haloed her head, thrown back against the line of the couch.

No! Pip was David’s to use. She was going to learn from him when he got his body back.

He was going to shape her, not this man.

She shifted slightly and Sevan said, “That’s great. Right there.” He walked around her, shooting photos from different angles. Sevan returned to his worktable and quickly began to construct an armature from his wire. When he applied bits of clay to it and the form grew to that of a human woman, David seethed.

Through the blackness of his rage he wondered if he could force Sevan out of his body and jump into it himself.

“Shall I talk to myself to keep awake, then?” Pip asked.

David didn’t like the play in her voice. She was a lonely woman. A woman who should be well-kept. This man was not a good match for her; anyone could see that.

After a long while of fiddling with the clay, Sevan announced, “Break.”

“Thank God.” Pippin reached for her robe and wrapped it around herself to check the work in progress. Sevan stood back from it, scowling at the figure.

“Ah, so sculptors feel it too,” she murmured to him with a sly smile. She moved near him and stroked his arm. When she spoke, her breath must tickle his ear. “It’s a very strong start. You have real talent. Can I get you a drink? Or would you like a... longer break?”

At that he turned to her. His head cocked slightly to the left as he regarded her now robed, as if he hadn’t been studying every inch of her naked. His gaze darkened from angst to arousal.

“I wouldn’t mind a chance to stretch,” he said.

Pip wrapped her arms around his so-talented Seventy arm. “I know a great place to do that,” she whispered in his ear.

Sevan let out a very feminine shriek. Pippin jumped back until she saw what had happened.
“Da— Jonathan! Sevan, are you hurt? Jonathan—bad cat! No! Bad cat!”

David stood up on his hind feet and used Sevan’s leg as a scratching post.

“Jonathan! No! No, get down! Sevan, he’s not doing it in spite. It’s just a cat thing. He thinks you’re a tree or something. Jonathan!”

David easily avoided Pippin’s swipes as she simultaneously attempted to soothe her would-be lover and capture David. He had to release, but he circled around, looking for another opening.

Sevan sank to the chaise and held his lower leg, howling at the ceiling.

Pip swung David up to her chest. She reached for Sevan’s shoulder as he bent to cup his wound. Blood dripped from several deep scratches.

“Is it bad?” Pippin asked. “He’s never done anything like this before. Nothing at all.” She hovered over him. “Should I call 911? Can I get you a pain patch? Bad cat!”

Sevan glared at David. “That cat is insane!”

David hissed at him, making sure his spittle found Sevan’s eyes.

Pip fought the growling, spitting animal in her arms. “Bad Jonathan!” She ran to the french doors and tossed the cat through them, snapping them shut before he could get back inside. David threw himself against the doors, hard enough so they rattled.
----

Oh dear, David was a baaad cat. If you like that, you can click on the book cover at the upper right to find a page that gives more info and places/formats you can buy it.

And right above that is a place to sign up for my very infrequent newsletter. If you do, you'll get a confirmation letter that has a secret code for you to get a FREE e-version of Touch of Danger, vol. 1 of the superhero romance series "Three Worlds." 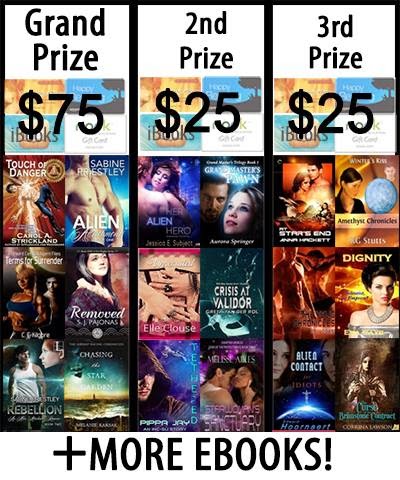 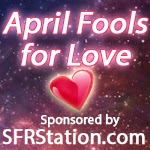 Did someone say "Contest"? Okay, here's the info! SFR Station is offering three prizes: Grand Prize: $75 gift card (your choice of iBooks, Nook, Kindle, or All Romance) PLUS 16 ebooks. 2nd prize: $25 gift card and 12 ebooks! 3rd prize: $25 and 8 ebooks! Let's see… Oh, the Internet and all the codes… Here's where you enter: a Rafflecopter giveaway They say you only have to enter on one blog to be entered in the big contest.

Did I say "all"? Lots of people are giving little April Fools excerpts. You can sample from a wide variety, and I think this will give you a listing of links for everyone:

If that didn't work, try going here instead, a simple little link. THE CONTEST RUNS ALL MONTH, so there's plenty of time to try out everyone's sites.

I think clicking on the button and picture at the top of this blog will also send you in the right direction, at least if I'm reading the HTML correctly.

AND WHAT THE HECK…
I'll give away a free ebook of your choice of my titles to TWO lucky people! All you have to do is leave a comment on this blog.

Hope you have a very funny and entertaining April Fool's Day! Me, I'll go back to my rocking chair and think lovely luddite thoughts.

Posted by Carol A. Strickland at 4:00 AM

Thank you for sharing :)

I'm new to your work, but you've definitely piqued my interest!!

I love the idea of David stuck in a cat's body!

"a telepathic psychiatrist from Las Vegas gets stuck in the body of a cat"... on the moon....

That was very funny! It's so out there, I love it!

I'm not a cat person but this excerpt drew me in!! Sounds fun!

Fun excerpt. How is David going to get out of the cat's body?

Cats and a telepathic psychiatrist? That's a combo you don't see anywhere.

LOVE the whole premise and really enjoyed the POV of a man stuck as a cat on the Moon. Great snippet!

I suspect all cats have people trapped inside. lol

What fun. Definitely a unique premise!

Catching up on the comments (sorry; I was on vacation). Thanks so much, everyone! I hope if you try it, you get a kick out of the book!