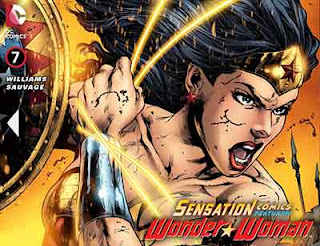 Now we start getting fancy and mixing up these stories between print and digital versions. I see online reviews of the printed issue mentioning a Catwoman story. Turns out that that story (which is a really cute one!) appeared in digital issue #9. I'll get to it next time. Why are they doing this? 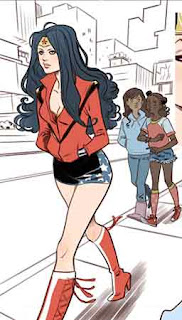 A hodgepodge of ideas (most of them preachy) thrown together with no cohesion. Here Diana is the leader of a rock band, “Bullets and Bracelets.” She has a rabid following and is playing in Athens while wearing an uber-short skirt that sometimes thinks it’s shorts. (No, it’s not a culotte or skort.)

Diana is worried and moping about “Steve,” though there’s no followup to this. As she exits the stadium, one pimply-faced fan shouts, “Slut! You’re corrupting our children!” Since when do kids of that age think about corruption of kids? A guy answers that “Some of us LIKE the way she dresses! She’s hot!”

Diana assures both that she dresses the way she wants to and “not to provoke or impress you.”

Diana ditches the rest of the band and discovers two young girl fans, whom she takes out to lunch. The one is too poor to order, so Diana orders for them, calling them “friends,” which makes them squee. (Why wouldn't a rich rocker automatically pay the tab for two young fans whom they've invited to lunch?)

The “she’s hot” guy from the concert steps out and reassures Diana that she’s really hot, then grabs her arm. Upset at her rebuff, he whips out a shotgun, which Diana then bends in half.

The art is fabulous!!!! I'd love to see the artist handed a good Wondie story to work with. This one sounds like something later-era Kanigher would churn out on one of his worse days. Nothing like hitting the reader with a baseball bat "message," especially when NOTHING in the story requires the main character to be Wonder Woman. Zero. It could have been Jane Schmo or even Black Canary as the lead. Bleah.

So sorry for Ms. Sauvage that she had to draw this claptrap script.

Speaking of claptrap and Kanigher:

“No Chains Can Hold Her!”
Art & story: Gilbert Hernandez

Just let me puke a moment. Okay, I’m back. I don’t know what Hernandez is on for this, but he’s tripping through the very worst of Kanigher’s Silver Age. His he-man Wonder Woman is brainwashed and kidnapped by the alien Sayyar, who is in cahoots with Kanjar Ro. Ro needs an invincible warrior to help him conquer planets, and his brainwashing scheme will only work on the Earth-born. 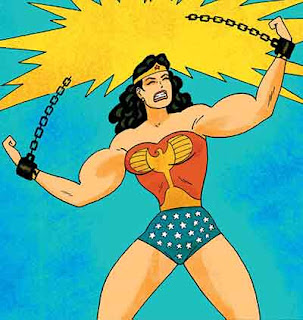 A very young Supergirl whose presence has not yet been revealed to the public (or to WW) follows the space ship, which results in a fight between her and the hypnotized WW. Though Supergirl is the stronger, she says that WW’s magic weakens her so they are evenly matched. The two villains lustfully watch the fight.

The force of one collision breaks dimensional barriers, resulting in the arrival of Mary Marvel. She thinks the two heroines are Sivana’s robots, and battles them. At this point it seems that Wondie is no longer brainwashed. (“Supergirl’s extra-power heat vision blasted the hypno-poison out of me!” we learn later.) She is amused to be involved in page-wasting fist fighting.

Mary flies Supergirl to the local sun to cure her of kryptonite poisoning, while WW dispatches the villains, thinking that the girls are now dead. Everyone returns to the ship, hale and hearty, and the three capes pull off another shockwave to send Mary back home. Wondie and Sgirl part on good terms while Wonder Woman uses up a few more pages battling a goo-monster, hurting her shoulder, and then lustfully thinking about getting Superman to give her a shoulder super-massage. 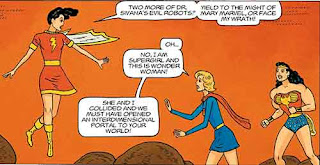 Crap art. Crap story. Hey, why can’t you talk down even further to us, hm? Even colorist John Rauch seems to have been asleep at the wheel for this. Bleah!

So… What did you think of this issue?

PS: Congrats to Ceci C, who won the WW decals from last week! Stay tuned for more contests...
Posted by Carol A. Strickland at 2:00 PM