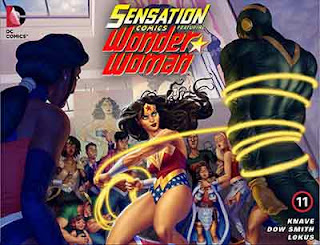 Big Barda co-stars as she and Diana return from ?? after helping some Apokolips "Lowies," (should be "Lowlies") who sound like refugees. Barda thinks Diana was too soft on them, and that the Lowies/Lowlies don't understand compassion.

It's confusing as to which version of WW this is. She wears a mis-colored nuDC costume. She also queues up to eat a hot dog, which the WML era firmly established as a food Diana despises.

The two hear an explosion or something ("THRA-BOOM," though it's not in that large of letters) and race to investigate far across the city at the Museum of Alternative Energy. There they encounter a group of robot gorillas, which Barda takes great pleasure in battling. She keeps calling them "monkeys" instead of "gorillas," and this is used as a running gag.

"I always think your world will bore me!" Barda says as she uses her energy rod to blast the robots. "But this! Monkeys to punch!"

Diana determines this to be a distraction and eventually finds the Brain (a brain inside a robot casing) and M. Mallah, an intelligent, well, gorilla. (These two are from the Doom Patrol series. Are that many readers familiar with them? Didn't they deserve a better intro?) While Barda and Mallah punch and trade quips, Diana punches Brain's casing and a few chips fly off. (Yawn.) "Eat vortex grenade!" Brain yells.

Pretty much ignoring the resulting blast, Diana begins to reason with the Brain. Turns out he needs a new energy source or his brain will die. Diana proposes to give him such, but he will go to jail. She has to lasso Barda to get her to stop fighting.

As the two villains are carted off to jail, Barda returns to the museum to procure one of the gorilla robots to use for sparring practice.

A modest story, hampered by artwork that... well, it just wasn't there. The style shows promise, but action was not portrayed in any lively sense at all, and the inks were blobby. Combined with the wishy-washy story that had only the one joke and Barda's exuberance to support it... (A real shame that Diana came across as such a wet blanket. Is her being a peacenik so difficult for all these writers to script well?) I'd like to have seen an editor step in and guide the creators more. I think they're capable of a much better job than this.

A beautifully drawn (and inked) story shows us an Amazon origin story performed by Amazons under Phillipus' direction on the occasion of Hippolyta's birthday. Apparently they know little about their origins, because this story has Hippy existing well before the other Amazons. She sculpted clay bodies for the rest of her people, into which goddesses placed spirits from the Well of Souls.

Indiana Jones was the one who was involved with the Well of Souls. Post-Crisis Amazons came from the Cavern of Souls, aka the Womb of Gaea. Oh well, as long as they're making up so many other things...

Anyway, the story really plays up Phillipus' slavish worship of her "beautiful queen." The queen doesn't seem to return the feelings much, but rather is cooly polite about it all. It's quite an uncomfortable relationship between the two, imho.

Meanwhile, Diana has been tracking a phoenix for a long time. Finally it dies spectacularly, and the new phoenix that arises takes the ashes of the old one and forms a beautiful decorative egg out of it. Suddenly the Cheetah arrives. She throws a spear through Diana's shoulder. Even so, Diana fights her off.

Cheetah says that phoenix eggs can imbue immortality. She says Diana's looking a bit old (!), so she can understand her wanting one, too.

Then of course (for Sensation) we get a "what Hippolyta taught Diana as a child" scene, in which Diana gets some funny dialogue as she tries unsuccessfully to get her mother to say that violence is a good way to respond to a threat. (Hippy says, "As warriors, we must first be dedicated to peace," which makes zero sense.) (See "peacenik" comment, above. And below.)

Back in the present, Diana pulls the spear out of her own shoulder and of course (nuDC) blood is everywhere. As the battle progresses, Diana doesn't do much to protect herself (why?) and gets severely bashed as she tries to grab the egg. Then Cheetah demonstrates Rucka-era super-speed, running around so quickly she pulls the oxygen out of the air (wouldn't she merely be lowering air pressure? But I digress) even though fires (which require air/oxygen) continue to blaze all around.

Diana falls. She recalls her mother telling her that great battles fought "for something bigger than themselves" are done by the warriors who endure and who don't die too early. (Really?) Diana hauls herself up and then proceeds to beat the Cheetah to a pulp. (So we learn violence is ALWAYS the solution. We aren't supposed to notice that if Diana had just used her lasso to wrap up Cheetah when she first arrived, no violence would have been needed to subdue her. But then, that might have made for a shorter story.)

Let me digress for a moment. There is a classic "Hero's Journey" that many stories follow. A few years ago, I learned that there's also a "Heroine's Journey," which is a bit different along most major points, but especially the end. [And frankly, I've seen heroines follow the Hero's Journey and heroes, the Heroine's.] The classic Hero all too often gives his all—his very life—to achieve his goal. The classic Heroine lives so that she can continue to protect the group involved in her goal. In a comic like that of WW's, since she is an icon of women and feminism (and humanism, don't forget that), it might be nice for Hippy to have pointed this out. But she's too busy singing, "Onward Christian soldiers" to mention that, I guess. Back to the story...

Hippolyta arrives, wearing a version of her own (gag) WW outfit and flying a propeller-driven Invisible Plane.* She has seen Diana's plight in her magic mirror, and has come to rescue her. Hippy asks her what the heck's going on. Diana presents her with the egg and says, "Happy birthday."

Turns out phoenix eggs are special to Hippy because a phoenix died on Paradise years ago, and the queen took the experience as a sign that her prayers for a child would be answered.

From within her Magic Lasso binding, the Cheetah asks, "Is this 'egg' nothing more than the emotional equivalent of a 'World's Best Mom' mug?" Yes, it is. It has no power to grant immortality.

The Amazon mother and daughter embrace as the new phoenix flies off.

We've seen some slippery continuity problems, and the Phillie-Hippy relationship became much too syrupy/cringe-inducing on Phil's part, plus the art tries to get too fancy in places ("Just look what I can draw!") and loses the story—but it's only a few places. On the whole, this is a satisfying and beautiful (and often funny) tale.

Why do writers have so many problems showing Wondie as an INTERESTING non-warrior? All this means is that instead of tearing/beating up things and people, she fixes. She BUILDS. She LEADS (by example). That's pretty active. Exciting, even.

We had a hint of this in the first story, when Barda and Diana were returning from ?? after Diana taught the Lowlies a better way of living. Why couldn't we have seen that? Diana's primary theme is that of positive empowerment. Why not build stories around that?

I know all too many Wonder fans who think WW writers follow her around, recording her adventures and so they can't be altered. Sorry, folks. Stories are crafted. If you have a character whose primary theme is that of positive empowerment, you STRUCTURE your story to show off precisely that. You don't keep handing WW stories that make her seem like any other superhero out there (pow! bam! React to that danger after it's already started! Work as a solo act only! Don't involve civilians!). You don't keep doing flashbacks to her childhood (even though these are usually sweet; once in a LONG while is good, but once an issue is not). You don't have her stop action so she (or her mother) can preach for a few panels.

What did you think of this issue?
---
* Wonder Woman is NOT a legacy hero! No! Never! Not!