I'm still waiting for the book to come back from the formatter, so let's talk about one of my all-time FAVORITE TV shows, okay? I mean, there's a movie coming out this weekend that purports to be an update of it, though the trailer seems more a period Bond flick with a double hero. 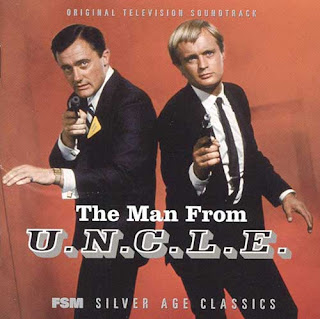 United Network Command for Law and Enforcement: U.N.C.L.E. This show ran on NBC from 1964 to 1968, and one of its characters, Illya Kuryakin, was my second True Love. (After that mop top Paul McCartney.) Ahhh!

UNCLE (let's spell it that way for simplicity) was a semi-well-known international law agency to the public. They knew about it, but they didn't THINK about it much. It was much like Star Trek (same network; slightly later time frame) in that UNCLE was staffed by a multi-cultural, multi-ethnic crew that hailed from all around the world. In that time of Cold War, the Russian Kuryakin could work side-by-side with suave New Yorker, Napoleon Solo.

(James Bond's creator, Ian Fleming, contributed Napoleon's name and also that of April Dancer, who'd spin off to her own show, The Girl from UNCLE. That was ALL the input he had.)

Though the New York UNCLE office had a public entrance, on the other side of the building agents often entered through a curtained cubicle inside Del Floria's Tailor Shop. They'd turn the coat hook sideways and a secret door would pop open, drawing them into a snazzy modern office (staffed with miniskirted ladies, natch) and computer lights blinking on every surface. The two agents were given triangular badges with their agent numbers on them. If someone came in who didn't wear the badges, a "Whee-oh, whee-oh" alarm would go off, agents everywhere would grab their guns and come running, and the bad guys would be done for!

Leo G. Carroll played Mr. Waverly, head of UNCLE's US offices. Rumor had it Waverly never left the office, yet somewhere I believe there was a Mrs. Waverly waiting at home for him.

The show was supposed to have been about Solo, but it was 1964. The Beatles had just stormed America. Here was the exotic-accented Illya (David McCallum's still sexy as Ducky on NCIS) (Robert Vaughn is very authoritative on all those "We mean business" lawyer commercials) with his longish hair (for the time). He was into jazz, he was quiet, and he could do ANYTHING, be it athletic or technical or seductive.

Vaughn's Solo was the ladies' man, the most Bondian of the cast. (Except when he was frugging with someone in a gorilla suit. The series developed an unfortunate case of Batmania in its third season, which very likely contributed to its only having four seasons. Check out more info here.)

UNCLE utilized cool spy gadgets, ahead of its time. Before Capt. Kirk ever flipped open a cell phone, UNCLE agents had pen communicators. Take the top off, insert it upside-down, and say, "Open Channel D!" This was all done to the beat of a cool blue bongo/flute/brass theme.

The series is on DVD and doesn't cost that much. A network I don't get often shows episodes. Just want to sample? It's difficult for me to choose one, but if I had to, I'd go with Season 1's "The Never-Never Affair," (episodes were always "The Whatever Affair") with Barbara Feldon (the future Agent 99 from Get Smart) as an UNCLE agent who doesn't think the mission she's on is the one she's actually on.

Have a blast watching these episodes. You'll be surprised at how many well-known guest-stars the series had (hey, it was immensely popular in its day!) and how many Star Trek actors showed up. 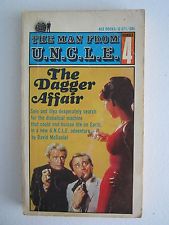 But if you can't watch, I can recommend two fabulous UNCLE books to you. They seem readily available on eBay. Both were penned by David McDaniel, who imbued his work with humor as well as action. Volume #4 is The Dagger Affair. When I visited San Francisco years ago, I HAD to see Lombard Street, because that's where a major scene in the book took place.

Then there's Volume #6, The Vampire Affair, which sees our Stalwart Heroes off to Transylvania.

Both Mad Magazine and DC's Inferior Five had great take-offs of the show!

Trust me, one way or another, you'll enjoy UNCLE!

Fingers crossed for the movie this weekend. Are you going? Do you have fond memories of the original? Do you know what "Thrush" was an acronym for? (It's revealed in Vol. 4!) (And also Wiki, if you like to cheat.)

Later note: Saw the movie. Enjoyed! I'll definitely be getting the DVD so I can watch it again. Illya isn't the zen-like Illya, but he's still cool. (He needs to have more Illya-type hair, though.) It was a CRIME, though, that McCallum and Vaughn didn't get cameos. The movie is actually a prequel, with U.N.C.L.E. not mentioned until the end credits. I look forward to more installments!
Posted by Carol A. Strickland at 2:00 PM

I have fond memories of the show. And Yes, I too had a crush on Illya. :)