Back to being Sensational!

We resume our reviews of Sensation Comics Featuring Wonder Woman (which, it has recently been announced, has been cancelled), this time focusing on digital issues 16-18. 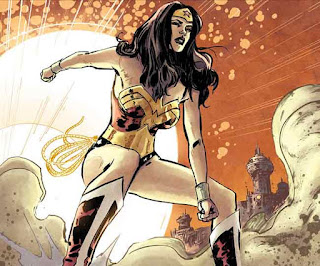 Queen Hippolyta tells Diana that Diana must journey to Apokolips with haste. "We always keep watch upon one another," the queen tells her of Darkseid and his planet of war. Because of increased "incursions," two Amazons have already been sent there, and the queen wants to know their status.

Somehow Diana finds a Boom Tube that is being used by two Apokoliptians (?) and flies to that world. She takes the one's clothing so she can skulk anonymously and meet Luftan, who has worked with the Amazons. He says the two Amazons have been arrested, Diana's lasso reveals that he's alerted Darkseid's forces to Diana's presence already. He is fearful of what the Amazons might do to his world.

Before Diana can do anything, the Female Furies: Lashina, Bernadeth, Stompa, and Mad Harriet (?) (none are named! Where's the editor?) team up to kill Luftan (his death doesn't bother Di) and then throw the now-unconscious Diana into the fiery depths of the planet.

A colony of scavengers saves Diana, who emerges without any burns because, you know, she's part Kryptonian (augh! Augh!) or something. Even so, the people in this place declare that they are loyal subjects, and that Darkseid knows and sees everything.

What Diana sees is a piece of equipment labelled "Lexcorp."

The Female Furies report to Darkseid. They refer to Diana only as "Hippolyta's daughter." Meanwhile and in quite a timely manner, Diana discovers that the two Amazons are to be executed that day. She asks for directions, but only one man will give them to her. "I never saw no one stand up to a Fury before. Didn't think it was possible. They gave you a good thrashing. But somehow you ain't beat," he tells her wonderingly.

The Amazons are to be executed to set an example to the populace. They see Diana in the crowd and escape being blasted to atoms. (While they were too weak to get out of their bonds, Diana snaps them easily.) Diana flies them into the sewers of Apokolips. Together, they destroy part of the structure to deter pursuit. 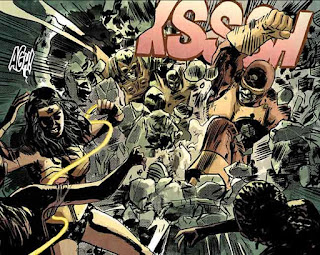 As they pause in the scavengers' section, the Amazons spot the Lexcorp thing. It's a bomb. It's theirs. If they drop it into the planet's core, it will solidify it and make the planet implode, destroying the entire civilization. Apparently this was the idea of some Lexcorp spies the Amazons had met, and Hippolyta knows nothing of it. "Imagine what [blowing Apokolips to smithereens] would mean for our people! For everyone!"

I HATE the idea of evil Amazons. No. Amazons are the epitome of peace. They only fight when there is no other recourse, and they are never dishonest or dishonorable in their actions. Of course, in my Proper Wondie Universe, Diana had to work hard to become Champion and does not even remotely resemble any Kryptonian in power levels. Hmf.

Diana tells the Amazons not that this is un-Amazonly in reasoning, but that it's "treason." They say so what; they'd have died anyway if they succeeded. "A GOOD death. So many would have been spared the coming war."

"A war that may never come," Diana tells them before she disavows them as her sisters.

When Darkseid's forces come upon them, the two Amazons manage to get away and shove the bomb into some kind of chute. "They'll sing songs to our memory…" (Kind of hard to do when YOU DON'T HAVE NAMES.) "...I just regret that our princess must fall with us."

Captured by the so-called god, Diana says that destruction is imminent and convinces him to let her go after the bomb. Okay, she wears a heat suit in the inferno, points given for that, and retrieves the bomb, which remarkably has remained stable through all this.

Darkseid destroys the bomb with his omega beams or whatever they're called, and then kills the two Amazons. ("I will honor the agreement... in the way I see fit," he tells Diana. Uh... how is that done, again?)

Diana is Not Pleased and makes a moue.

As she's allowed to return home, two scavengers hiding in the shadows note, "An Amazon -- an outsider -- saved us. Even Darkseid knew it." "He did at that. And you know what? He's not as tall as I thought he'd be." 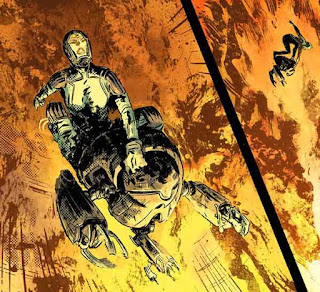 I liked the story. Didn't like the slips of continuity (bad Amazons; Kryptonian Diana) and sighed over the other kind of continuity (must be an alternate universe because it doesn't fit in anywhere) that Sensation loves. (Anything's better than nu52!) Within the bounds of its own story, things were in continuity, so I guess that's enough.

We still don't know why/how the Amazons and Darkseid are long-time enemies in this continuity. How much motive is present for the action of the story? Why doesn't Darkseid acknowledge Diana as herself, but only as the daughter of Hippolyta? Why does Diana not show any emotion when innocents die? When her sisters die? Why do these Amazons think that killing innocents is a good thing? For all the story's sturm und drang, its soul is missing. And if anything, a Wonder Woman story needs SOUL. That's what she's all about!

The artwork was better than much of what we've seen in Sensation. Excellent proportions, good delineation of the human form and action, and backgrounds/objects. The colors were also vivid. There was one panel where I thought we were looking at a bearded man, but it was just a heavily-shaded Diana. Diana's tiara tended to morph from section to section, but that's just being picky. The art even used Ben-Day dots—how fun is that? Interesting brushwork abounded.

There were a lot of powerful compositions. The dialogue was a bit choppier than I'd usually like, but it was terse and to the point. The story was action-packed and focused on Diana.

I'm left wondering how the heck Lexcorp spies got to Apokolips in this continuity if it's all Amazons can do to keep to their own mission.

But an exciting story nonetheless. Diana came off as completely capable and a true champion.

What did you think about this story? Do you like the idea of evil Amazons? What should be the fate of Apokolips?
Posted by Carol A. Strickland at 2:00 PM