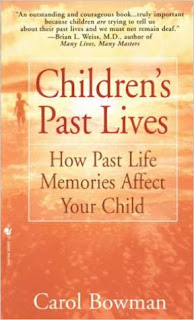 Two pretty different books this time, one non-fiction and the other, fiction. Let's start with the one the Rhine Research Center Book Club had us read last month: Children's Past Lives: How Past Life Memories Affect Your Child, by Carol Bowman.

When Carol's 5-year-old son suddenly freaked out at a Fourth of July fireworks event—when previously he'd enjoyed fireworks—only a hypnotherapist could help by taking him back to a previous life. There they all discovered that the boy had worked with and died next to cannon during the Civil War.

It took one session to uncover that (later sessions brought up data that could be verified through historical records) and clear the boy of his phobia, as well as eczema which marked the site of a Civil War wound. His older sister's phobia was about fire. Unknown to her family, she kept a packed suitcase under her bed so that in case of fire, she could escape with her things. It turned out that she'd died trapped in a house fire in a previous life. After an easy hypnosis session, she completely recovered from her fear.

This book not only shows that many children spontaneously recall past lives (probably because they haven't shut out/overlaid those memories like adults have), but that quite a few illnesses and chronic conditions can be quickly cured by re-experiencing past lives and working through them. Carol herself had been the first in her family to undergo past-life regression in order to cure her from terrible recurring episodes of respiratory diseases such as pleurisy, pneumonia, etc. that her doctors had unsuccessfully treated.

Imagine: We can cure some diseases and addictions without drugs and do so quickly, just by past-life regression! The book says that this is quite common treatment in Europe.

What do you do if your children or grandchildren start talking about what can only be a past life? Carol gives advice which boils down to: Don't close them off. Don't belittle what they're saying. Don't ask leading questions. Assure them that this is perfectly normal (it is!) and ask them to tell you about what their life was like, who the people around them were, how they felt remembering it, etc. She gives guidelines for determining if this is a true past life or merely a fantasy. (There are clear differences.)

Carol also gives a thorough run-down of the extensive research that has been done through the years on chronicling children's past-life memories. It's interesting that noted skeptic Carl Sagan said the only bit of psi he considered possible was just this, because so much research had been done on children who could not have been influenced that much by outside forces.

Carol's book is an easy, engrossing read. It certainly sent our book club off on scads of speculation in related areas. Recommended! It's spurred me to order books about the Kaballah and the Tibetan Book of the Dead, since they go into reincarnation from a different point of view. I'll add them to my collection of reincarnation books. (My favorites are Reliving Past Lives and Life Before Life, by Dr. Helen Wambach.)

Note: During the book club discussion I happened to mention that I have a recording of the first Bridey Murphy hypnotic session. I was discouraged because no one had ever proven the historicity of Bridey. The group assured me that that was complete bull; that indeed a number of elements of Bridey's story have been confirmed, including the discovery of an ancient bridge she'd mentioned, that hadn't been found until recently, long after the hypnotic sessions. How wonderful! 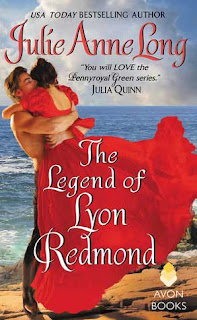 The Legend of Lyon Redmond (Pennyroyal Green series, #11), by Julie Anne Long. Julie has such a poetic style. She goes deep into sensory detail, and her language is so rich it pulls through your fingers like deep velvet as you read. She's also constructed Pennyroyal Green, a small Sussex town during the Regency, presided over by two rival families. All along, the series has whispered of the forbidden love between eldest Redmond son Lyon, and Olivia Eversea, and how one night Lyon disappeared, never to be seen again, while the beautiful Olivia languished.

Here we finally get their story, and it was worth the wait. Their heartache has lasted five years (my gosh, has all the action in the other books only taken 5 years?) as they've gone their separate ways. There are several spots that will tear at you, though there's no sex until near the end. (But oh! Olivia's first time was far too brutally done! I wonder if Julie realized it? Olivia didn't seem to mind, though. I notice several Amazon reviewers mentioning this, too.) (Whoops. I didn't mean "tear" in that fashion!)

The conundrum Oliva faces in her present-day (for her) life is not a huge one. In fact, it's rather drab and constructed in obvious fashion. For a finale, I think it should have been whipped to a frenzy to made her final decision and its ramifications difficult. As it was, I wondered what took her so long. (She was terribly cruel to draw things out, which didn't sound like Olivia at all.)

We see an awful lot of familiar characters throughout the story. The epilogue, which takes place in (our) present day, tells us what happened to what seems like EVERY SINGLE CHARACTER that was ever mentioned in the series. The teller of this tale seems to have memorized the life stories of these people who lived two hundred years before. Unlikely—and the sequence goes on FAR too long. It would have been better doled out in bits with each book as it pertained to the characters within. Still, it was good to know what happened to you-know-who and uh-huh-that-guy, and that YKW got what he deserved. Probably. But I can't recall which side UHTG's wife was on. Did karma catch up with her? Did YKW actually deserve what happened? I'll have to go back and reread some of the series.

Some of the more sensuous scenes go on too long as well. Yes yes, the language and imagery are heavenly. But after a while your fingers begin to drum and you wonder if the plot will ever kick in again. This happens several times. I kept thinking that a good editor could have clipped a paragraph here or there and greatly improved an already fine book.

So it is recommended. I gave it five stars on Amazon because the language and emotion really do tower over any weaknesses the story has. Book #11 is a fulfilling ending for the series—or at least I assume it is such. The epilogue certainly hints at at least one more interesting story to be told, located a generation or two beyond this one. (Or has it already been written and I missed it?) I encourage people to read other Pennyroyal Green books as well. They've handled characters from both families, as well as outsiders who rent a house in the village, or people employed in the school or at the church, who are neither Redmond nor Eversea.

Someone really needs to record "The Ballad of Colin Eversea," the song that is warbled in every book, sometimes to great extent.

Happy reading! What have you read lately that you've enjoyed?

Let me experiment a bit with this Amazon Associates thing, okay? I have the first in the Pennyroyal Green books here as well, The Perils of Pleasure. Sorry about the prices on Life Before Life, but maybe you can find it used somewhere.


I THINK that next week I'll have news of a great contest for y'all! Stay tuned!
Posted by Carol A. Strickland at 2:00 PM