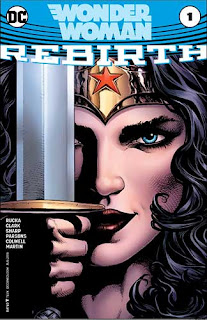 I have pretty much despised the nu52 that DC has saddled us with since September of 2011. It was bad enough (a catastrophe! The end of the world!) that DC eliminated the concept of Wonder Woman in June of 2010, keeping just the name and bits of costume going, but now they REALLY massacred the concept. Diana now had not only a father, but a patriarchal father who was the king of the patriarchal gods.

She was stupid, often used as a tool, and hated by her fellow Amazons, who were now as evil as it gets. She was lied to by just about everyone. She was defined by the men around her, not by herself. She hauled about a sword and shield, and never hesitated to institute some bloody bit of work. She owed her skills to a man. She, who had once been the embodiment of the search for peace and positive empowerment above all else, became the god of war.

There were a few bright spots, but they didn't occur in WW's own title. Forgive me, but I haven't been able to stomach extended periods of reading nu52 material, or I could specify exactly where these bright spots occurred and their extent. I will make it a goal to get this stuff read by 2017. (And reported upon, of course. Oh, how I need to update my website!)

But anyway, DC had instituted this nu52 because apparently TPTB hate the idea of superheroes. Instead, they strove for Dark and Corrupt. In particular and to judge from what they did to her in the past six years, they (cough*Dan DiDio*cough) seem to hate the very idea of Wonder Woman. On the whole, company sales plummeted. DC instituted "DC You" or something like that, and sales fell even farther. So yet ANOTHER company-wide, even more convoluted reboot was scheduled.

Actually, it's not a re-boot. No, DC can't do things cleanly. If they'd done so with the original Crisis on Infinite Earths, they might not be in this position today or at least they'd be in a more stable one. "Rebirth" (some call this "Afterbirth") is a kinda-sorta reboot, with elements from the nu52 and elements from more classic versions of the characters and new elements thrown in to confuse everyone. The changeover is supposed to take two year$$ to complete (most titles will come out twice a month and cost $2.99. You do the math.), so everything's going to be in a confusing uproar for some time.

This run of Wonder Woman is written by Greg Rucka. Art duties on this issue are split between Matthew Clark (pencils) and Sean Parsons (inks), and Liam Sharp (full art). Even the colors have to have two artists to handle everything. Editors are Chris Conroy and Mark Doyle.

Now, Rucka had a run of WW back from 2003-2006, ushering in what I called her "Dark Age." Though I liked his first issue, I didn't like what came afterward. Diana and her stories were imho pretentious, a far cry from the human stories her fans loved. For the very first time, Diana used her lasso as a WEAPON (for no good reason). Positive previous continuity was done away with, much of it by having Hera kick Paradise Island. To me this signaled contempt for the basic mythos and/or certain creators of such. Established characters were gone; new ones, including the biggest Mary Sue I've ever seen, were introduced. Yet another Amazon massacre took place. Diana was master of everything she surveyed (except she received no respect from others), her Silver Platter powers souped up so she never had to hesitate or doubt in her perfection.

But I loved Rucka's run for a few things. He introduced an efficient Amazon embassy. (Okay, there were no Amazons employed there, and Diana was the ambassador, which makes no sense…) (And if you want to get technical, he introduced it in Hikkie and not in the actual WW book.) He gave us a Magic Mirror to Paradise Island, and I've always been ca-razy about magic mirrors (!!!), of which the WW mythos has had a few. He did introduce the bull-man Chef Ferdinand, who had his moments though he was cast as Diana's Alfred. (FYI: Eric Luke also tried to give Diana an Alfred.)

So I braced myself for this issue. It's confusing. It's supposed to be confusing, but how much confusion can we take, twice a month for two years? The story will alternate between the past and the present as well.

The cover -- both versions -- that advertise what a reader will find inside the issue depicts Wonder Woman with a sword. Thankfully, there is no sword to be found inside the book.

Universes are merging or somethinging, apparently, and Diana recalls both her more classic (not classic per se) self as well as her nu52 version. We are inside her head the ENTIRE ISSUE -- no humans for Diana to bounce ideas off of, no one to befriend or defend (except in the silent opening fight), not even a villain to talk to. And what's inside her head is pretentious stuff indeed.

In the opening fight sequence, for example, she saves a young-looking woman in a building that is labelled "XXX" (I checked it to see that my company's logo was nowhere on it, whew) from a man threatening her. Though Diana does take a moment to help the cowering victim up off the floor, that is all the humanity we see from her. At no time does she take the hysterical woman into her arms to comfort her. Though other victims are seen later wearing blankets, likely provided by the police, Diana's victim is left to stand in the street in her underwear and have a breakdown. Hey, there's no time for Wonder Woman to be a sissy!

Wouldn't it have been nice if WW had turned back to the victim, as if she were having a change of heart, or recalling a change of continuity, to comfort her? Wonder Woman should be the kindest, most human and likable of all the superheroes. She shouldn't be the creature I once termed "Rucka Woman."

And yes, she uses the lasso as a weapon again. The artist highlights the blood it spills as Rucka utilizes it as a whip. Diana's costume shifts and shifts some more before she decides on the new Rebirth version, which she apparently had packed in her closet all along. (Fans of the Mod Diana Prince know that she kept superhero costumes on the back rack of her store. Does this hold true for modern-day Diana?)

Her lasso becomes an oracle as well. It directs her to talk (since it has no mouth) and reveal some of what is going on. It makes her speak of herself in the second person, as if the lasso were sentient. Instead of revealing Diana's truth, it reveals the universe's truth.

What is truth? We are reminded of an old JLA tale concerning the lasso -- a story that infuriated me because we were told there was only one truth ever, and the lasso couldn't stand handling two truths concerning the same situation. How simplistic. The supreme truth holds itself together in facets. What is true for one is not necessarily true for another. What is true at one point in time is not necessarily true at another.

And apparently when Diana completely smashes a mirror, it can regroup into an only cracked mirror on the page following. Diana can somehow teleport herself straight to Olympus -- something to do with her war helmet? It's unclear -- only to find "automatones." With an "e," like Rucka's previous run had placed an extra vowel in Medusa's name. Yeah yeah, I know that this is technically a correct spelling for this specific situation, but in comics it is unneeded pretention. So Diana gets to end this issue with a boring fight that seems to have no purpose or consequences, just as she began it with a fight in a different venue.

Okay, it's supposed to be confusing. I'd rather it be confusing and star someone I could like, who gives me a reason to root for her. Didn't find that in this ish, sorry.

CHARACTER IS MORE IMPORTANT THAN PLOT.

I can live with just about any art style as long as that style is consistent. Since we had two different artists this issue the art grated on me, though in general it was fine. Anatomy skills had occasional glitches that I wish some editor had pointed out and had corrected. Quite often we got some great action shots, but then we'd see Diana with boobs that were much too large (and no hips), or with a giraffe neck. A little more care in the rendering, please. Monsters were drawn quite nicely, but were so dark we really couldn't appreciate them. The colors turned blinding, distracting dark red during the Olympus scenes, but were of complex hues complementary to the tale in the rest.

If I'd been a newcomer to Wonder Woman, I don't think I'd have been intrigued or interested enough to pick up another issue. Like I said, the character was not that likable.

And let me just say for the record: I DESPISE the idea of Wondie having a brother.

Not only a brother, but a twin brother. We've seen Diana with a twin twice before. Didn't work those times. She is her own hero; she isn't even a legacy hero (though some runs have insisted she was). SHE IS HER OWN LEGEND. She shouldn't have someone stealing her thunder.


I'll give the series another chance because I always have hope for Wondie. I was wrong about the first Rucka run, in that I liked the first issue of that. Perhaps this will be the opposite: bad first ish, great or at least acceptable following issues. I've seen her bounce back time after time. When will she again become the character she was meant to be?

For another, more positive view of this issue, see Martin Gray's review here.

Of course you're invited to write your own opinions here as well. While you're here, how about picking up one of my books? Thanks!
Posted by Carol A. Strickland at 8:07 AM