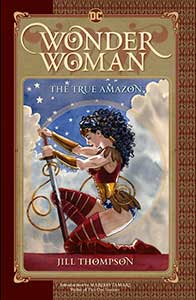 So often I hear people say that Wonder Woman has had NO good stories told about her. I want to scream. Then others will list their Top 10 WW Stories, and again I scream, because they're usually quite recent stories, and very often quite awful ones. Yes, Wondie has had TERRIFIC stories... but not enough. Too often the staff given her does not respect her or just doesn't have talent and/or inspiration, and Editorial lets them get away with offering substandard material.

But now we were going to have a WW graphic novel! Oh boy! Graphic novels are for special, quality stories (unless they concern themselves with alternate-world scenarios which there are far too many of. But those happen to characters and groups that have had lots of great stories already told elsewhere).

Jill Thompson would be on Wondie again. This should be good! Judging from the hype and knowing her quirky style, I imagine this will be a fine kids' book. I mean: Jill Thompson! Wondie! Kids don't have access to the kind of comics I was able to revel in when I was young. Why, when I was VERY young, I had Kanigher/Andru & Esposito's Wonder Family tales to amaze me. They were PERFECT for kids of that era. This book is rated 12+, which is older than what I'd supposed. Well, let's dig into it and see.
The first page is a lovely watercolor of Paradise Island. Then we’re introduced to the Amazons, who are five times stronger than men and brave in battle. We get a quick origin:

The land of the Amazons is called “Amazonium.” (No, that's not treated as a metal here.) The king of Mycenae claims that Amazon queen Hippolyta has tried to steal his daughter away from him. Therefore, he sends Herakles to conquer the Amazons and take her Golden Girdle so the daughter will see the error of her ways. (In the actual myths, daughter Admeta demanded the Girdle for her own, so Daddy sent Herk to get it for her. Why change the myth?)

Herk declares war on the Amazons and we see lots of slaughter. Not kid-friendly! Well, the action and narrative were rather vague, so maybe it was okay. I was struck by the way Thompson had Hippolyta step back from her DUTY to face Herakles in combat and let some redshirt do it instead. This is not how things were done back then. Kings and generals fought each other in person; only the infirm and cowardly did not.

As more armies joined Herk, the losing Amazons sued for peace. Instead, Herakles chained the queen. Zeus watched and lusted over her, deciding to disguise himself as one of Herk’s men and go to her (how kid-friendly!), but Hera overheard and sent a ship for the Amazons to escape to, away from both her husband and Herk. A confusing scene involving a VERY large, distracting helmet shows us the queen slipping out of Herk’s grasp while he’s able to saw her girdle off her with a knife. (But not skewer her while doing so. ???)

Then we come to some pages about life in Themyscira, where the Amazons busy themselves with peace and the arts. But Hippy wants one thing more: a child. Every evening she sculpts a baby in the sands of the island and sings a love song to it. We see her song spreading across the ocean and up to the heavens, to Olympus itself. Everyone is charmed by it.

And I thought okay, forget all the violence and this is shaping up to be a very nice kid’s book. Lovely, magical stuff!

The gods are so moved by the song they weep, and their tears endow the sculpture with life. Diana is born! The nation celebrates and “they poured all of their energy into granting her every desire.”

This is Silver Platter Diana*, one that automatically got her powers without working for them. (FYI: I'm a firm believer in Amazon Training.) She is spoiled “and no one ever told her ‘no.’” Diana grows up a conceited bully. Her nation just smiles at her and makes things worse. She blames others for her misdeeds.

Oh no! This is an Alternate Universe Diana after all! Somebody kill me now.

When she hears of mysterious, evil creatures on the island, the now-grown Diana sets off to conquer them — and gain the treasures they guard. Her feats are celebrated except by Alethea, who tends the queen’s horses. She gives Diana the cold shoulder. Diana tries to bribe her, but Alethea says, “My friendship cannot be bought…. I am loved by a person’s honest actions and how they treat those around them.”

So Diana sets off to prove she does that more than anyone else. Then, when it comes time for an annual festival to commemorate the nation’s warrior past, Diana enters to win “for the champion is the best of all Amazons and must embody all of the qualities that Alethea admires!” (Though the championship seems to be a reward for physical prowess and not that plus good character.)

Interestingly enough, there are several others who are in Diana’s range of power and abilities, and she’s not sure of being the winner. During a chariot race she panics, decides to distract her competitors’ horses, and uses a magic horn to release the horrific creatures she’d once imprisoned. Though Diana crosses the finish line first, the creatures kill horses and severely injure Amazons. As the battle rages, the others try to protect themselves, and one, to protect Diana. That Amazon is ravaged by a monster and dies, while the rest of the monsters escape to all corners.

The story goes into detail about the terrifying injuries many Amazons suffered, and how horses had to be euthanized. Great kiddie material there. And of course the dead Amazon is Alethea.


The queen arrives to ask what has caused this horror, and all fingers point at Diana. The queen realizes that spoiling Diana has led her to this. “There must be an atonement.” (Of course the queen doesn't call punishment on herself or the other Amazons for having raised a kid this way.)

Diana makes a private vow: “Never will I rest until I have undone the wrongs I have committed… I dedicate my eternal life to serving others and using my gifts for altruism and not gain.” Yeah, like she paid attention to her first vow. And "altruism" is likely outside the vocabulary of a 12-year-old.
The next day, as the other Amazons yell at the queen to kill Diana, torture her, whatever, others ask what would Diana’s death serve? The queen calls Diana and garbs her in an outfit much like a regular WW outfit (and mimicking what Alethea had worn in the contest), with few exceptions. “This enchanted crown that you so coveted shall be upon your brow like a crown of thorns…” Why mention a Christian motif here?

The the queen banishes her until she has paid for her treachery. We see her getting in a rowboat and eventually finding land. 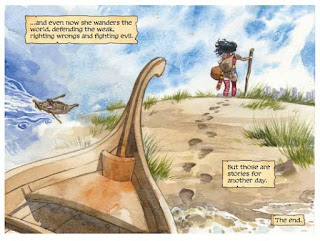 Okay, the final panel says: "...And even now she wanders the world, defending the weak, righting wrongs and fighting evil. But those are stories for another day."

NO!!! Those are stories for a graphic novel! Stories set in the mainstream DC universe, showing us what a GREAT CHARACTER Wonder Woman is!!!! Not some story telling us that she's a sleaze.

Do we have ANY clue that this Diana will actually heed her vow? We’ve seen that vows don’t mean much to Diana. Why should we believe one small narrative panel? Why didn't we get PROOF that Diana had abided by -- or failed -- her vow? The plot completely lacks an ending.

This book is entitled Wonder Woman: The True Amazon. Yet it doesn't tell a story about anyone like that. If writers don’t want to write about Wonder Woman, why can’t they come up with original characters to write about instead of soiling established heroes? Especially ones who need all the positive, quality, respectful stories they can get?

By artistic and writing style, this would seem to be a book for kids — very likely kids wanting to know more about Wonder Woman. But this is not Wonder Woman. And the violence depicted is not kiddie material.

Part of the back material (there are a lot of “the making of this book” kind of pages) is “designing the Wonder Woman statue.” Perhaps this is the end-all: to give an excuse for yet another variant WW statue. (Yawn.)

Such a disappointment. Imagine if the book had been a charming children’s story about Diana growing up. Imagine if it had been aimed at middle schoolers, grade schoolers, high schoolers, or adults. (Choose one group and remember not to talk down to kids.)

It is a mystery to me why DC would not take the chance at a graphic novel to say: Look here! Here's the character you know! Here's a great, heroic story about her! If you're new to Wonder Woman, we'll show you why you should not only be interested in her, but excited with her legend. This story is true to her mythos, reiterates what the general public knows about her, and shows that she's still a vibrant concept in the 21st Century. Plus, did we say? -- it's a great story!

----
*Post-Crisis Diana was also (so unfortunately) Silver Platter Diana, as have been the majority if not all of the versions since. The early Silver Age WW was also technically Silver Platter (we saw the gods blessing her at birth, though that, like WW's "beautiful as Aphrodite, etc." intro lines, could be written off as hyped-up language written by a poet who didn't mind being smitten by jealous gods), though she often referred to (and sometimes we saw) constant physical Amazon Training. Even Wolfman's original screwed-up origin of Donna Troy mentioned the importance of Amazon Training. Being a mere female, WW often had to be shown as having not had to WORK, much less WORK HARD to be who and where she was. [Insert "loser" buzzer sound here.]

Superman didn't have to do a thing for his powers except sunbathe now and then. Batman? Had to WORK and train to keep his skills sharp. Which character is more popular, hm?