The next wave of medicine

I hate driving at night. You can't get me to go out on Saturday night, the night drunk drivers so love. But I attended an event for the Rhine Research Center last night, a Saturday. Usually they meet at the Whatshisface Theater, but this time they met at Dook's Episcopal Center. Funding problems? Well, this was their spring fundraising event. They're trying for $10,000. About 100 people attended.

For the first hour, we honored Dr. John Palmer, who's been editor of The Journal of Parapsychology for some 25 years or so. He received the J.B. and Louisa [pronounced with a long "i"] Rhine Distinguished Service Award.

Dr. Palmer was called the "rock star" of parapsychology. If papers came in to the journal whose methodology wasn't up to his standard of snuff, he sent them back for more work. The Rhines's daughter, Sally Feather*, talked fondly about him for a while, and others came up to do the same, such as Joe McMoneagle, the astounding remote viewer (and out of body traveler, though the two may be the same thing; studies are ongoing about that) who worked (works?) for the government in their now-somewhat-declassified "Stargate" section. (This was well before any Stargate sf stuff.) McMoneagle told us "the best science in the world is being done in the paranormal." It has to be exacting. It has to be replicable. It has to be SCIENCE.

The Rhine Center must have been a crazy place back in the 50s and 60s. People talked of the wild weekly parties they had. (Barbara Ensrud, the head of the Board of the Directors, mused afterward: "We need to have more parties.") There was one fellow who, every time he saw Dr. Palmer, tackled him (accompanied by others) and placed his hand on his forehead, bellowing (and here the guy telling the story also bellowed) "IN THE NAME OF JAY-ZUS! HEAL!" No matter how quietly Dr. Palmer snuck in, the guy would tackle him.

Funny stuff, congratulations, and best of luck and health to Dr. Palmer on his retirement! But that's not what we're here for in this column.

Guest speaker for the night was Dr. William (Bill) Bengston. I've raved elsewhere about his first book, The Energy Cure. Last night he told us that he didn't come up with that title; his publishers did. He insisted that energy has nothing to do with psychic healing, at least the kind he's investigating. However, "The Energy Cure" sells books, so that was that.

In the meantime he'd been studying to be and eventually becoming a professor in sociology. For the past 30 years he has also been conducting rigorously scientific tests of "psychic healing." These tests can easily be -- and have been -- replicated around the world, over and over. 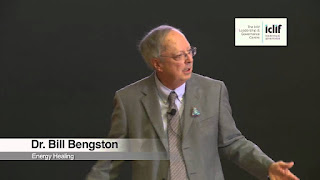 Last night he said that he'd gotten to the point where, if a test had been done 300 times with the same results, he didn't see a reason to do it the 301st time. He says it's time to put the studies into practical use.

What has been done mostly in the experiments, or at least that I've heard about, is injecting mice with breast cancer cells, far above the amount that are usually done in tests. The control mice live for about 20-some days. The others that are worked on... Well, they develop tumors. The tumors get ulcerated. Then the tumor implodes, completely disappearing. The mice are cancer-free.

The mice are injected with more cancer cells. They don't develop cancer. Blood from these mice is injected into infected mice. Their cancer disappears and, again, they never develop cancer again. They are IMMUNE.

This all comes from holding the mice cages. The infected mice gather around the holder's left hand. Once they've (the researchers guess) received the dose they need, they exit the mob. When all have received the dose, or when they're all healed, they ignore the hand. (Children will also do this, wandering away when they've had enough.)

In addition to mice, people have been included as being the healees.

Sessions have been done in shielding steel vaults with all kinds of electronic detecting devices inside. No energies have been detected. (The Rhine, which is conducting independent tests with the method, says they've detected "biophotons," but will test further.)

And get this: a person can "charge" some materials, like cotton and water. Those materials can be sent to a sick person and heal them. You can take the cotton material, cut it in half, give it to Person A with condition X, then cut the remaining material in half again and give it to Person B with condition Y, and Person C with Condition Z... and they will all be cured. The same energy can cure different conditions.

The talk last night said they were concentrating on various cancers and Alzheimer's, which get excellent results. Dr. Bengston showed us slides of how they check down to the gene to see what exactly is being affected.

The method is non-linear. This means it goes up and down. You can show a lot of healing one day, and after the next healing things seem to go backward, and then the next one heals things completely. Dr. Bengston is eager to begin experiments to see if one can heal illness retroactively. !

But wait! You don't need blood or cotton or water to heal. Inside those steel containers they made sound recordings during a healing session, which consisted pretty much of breathing or silence, I would suppose (maybe some innocuous chatting, because the technique requires one to NOT think about healing while doing it). When played to psychic sensitives, the sensitive could tell when the healing was taking place, as if a nova hard just gone off.

And other subjects were healed just by listening to the tape.


Is there an app for that?


It'll be coming up, if some tests coming through in the next few weeks hold with the theory. For 99 cents you'll be able to listen to your iPad and be healed.

Bengston said the scientific community and public attitudes are changing toward all areas of parapsychology. Younger people don't want to know about proof. They want to know what you can do with it. When Bengston speaks to doctors at universities, he finds that the smaller lecture rooms he usually is booked in have three times the amount of people trying to hear him than can be accommodated. Instead, video has to be set up so everyone can be seated in other rooms to listen. Before he leaves, he often gets invitations to set up experiments at that university, which is why he currently has studies going in ten or so universities around the US.

Again, energy healing has nothing to do with energy, he thinks. It's more a condition of CONSCIOUSNESS, which many believe to be the next HUGE thing in science. He talks of resonant bonding between healer and healee, as well as how placebos work, which seems to be part of this "meaning field" that psychic healing sets up. It is selected by consciousness. "Life responds when it has a need."

The energy in this method is radiated from the left hand. People who use this method for a while, though right-handed from birth, find that they've become left-handed. How cool is that?

And Dr. Bengston  says that he tries to choose non-believers or sorta agnostics to healing as the people who do the method. Believers don't do so well with it, which left me wondering how people who do this often and see positive results, don't qualify as "believers." Hm.

Dr. Bengston told us that because people who try healing with the intent of doing healing often get bad results, if we got sick, perhaps the last person we wanted to see was a medical doctor. (He's a really funny guy! Had us in stitches.) At this point, someone in the audience offered a well-known anecdote: When Israeli doctors went on strike, the nation's mortality rate decreased for the duration.

Anyway, a fascinating, fascinating talk with lots of slides showing test results (but not excruciating test results, as this was a talk for the Rhine supporters and not the medical establishment). The FDA will not be able to control a 99-cent app that does not promise healing but rather says, "try it and maybe it will work for you." Look for this VERY soon, and look for the studies to expand to illnesses besides cancer and Alzheimer's.

The Rhine has many studies in this area slated for 2017-2018. I want to join one of their healing groups, which is trained in (but not by) Dr. Bengston's methods (look up those here). But the Rhine is always struggling for funds. This spring they're offering a raffle with all kinds of keen prizes. The top prize is a trip to Tuscany, Italy. There are also trips to West Palm Beach, psychic readings, and Journal subscriptions, which I already get because I'm a member, darn.

Again, that website for the raffle is https://go.rallyup.com/rhine-1. Support the Rhine!
----


*I looked up J.B. on Wiki to try to discover Sally's last name, and instead found this line: "Rhine's results have never been duplicated by the scientific community." Which of course is pure, 100% hooey. All the major divisions of parapsychology have been quite scientifically proven and successfully retested around the world, many for some 100 years now. Wiki does NOT like the Rhine or anything to do with parapsychology. They post lots of disinformation ("alternative facts") about it.
Posted by Carol A. Strickland at 11:00 AM