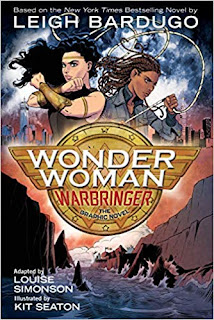 Just finished reading the new graphic novel, Wonder Woman: Warbringer. It's a dreary, slow tale that needed focus, sharper editing, and explanation as to the main (historical) dilemma that sets up everything. As it is it's all over the place, very little characterization for anyone. When I get a longer work, I expect to wallow in WADS of characterization because there's room for this most important of elements.
Here we have a Diana made of clay (yay!), but one with Silver Platter powers, gifted and not earned. (A plot twist gives some of her powers to someone else, who instantly also has the SKILLS to go with them, as if working for something isn't important or necessary.) Queen Hip is a brunette here, but is fairly estranged from her daughter, who longs for love and acceptance. (WHY do so many of the newer tales do this?) Diana doesn't get it from unkind Amazons (and her mother, who condones the treatment). (Amazons are NEVER unkind! They are the very foundation upon which Diana was built.)
But the worst offender by far is the art. It is literally colorless, or monochrome, with a few bits of red here and there to show violence. And sometimes not; it's inconsistent. It's fairly lifeless, when a story with so little movement to it needs active art. Even the action scenes are not very. During a number of crisis points I could not tell what the heck was going on.
A couple of times it's mentioned how provocatively Diana is dressed though she's covered from chin to toes, with only a small section of belly bare. Giving her a tee shirt is supposed to make her less exposed. ???
I want to introduce the artist (who teaches comics) to the works of Will Eisner, Amanda Conner, Sergio Aragonés, and Alex Toth. I'm not saying she should display their genius. I just think there's a LOT more she could have done. Here almost all panels are medium long shots, and all figures except (a little) for the chubby chick look and pose alike. They stand around. Facial expressions are minimal; body language is missing. There is no drama in composition or action!
Why wouldn't an editor point this out and advise a different approach? If this is the artist's normal style, why was she hired in the first place for such a project?
The panel sequences are sometimes quite choppy in narrative. Typographic sound effects are wan; easily missed. I was surprised to discover that Diana and the girl victim agree that a female loses her personhood when she gets married -- but this is what the story teaches. When a boy touches Diana's chest, she discusses the problem instead of slapping his hand away and THEN discussing it.
Perhaps I read the story wrong, but what I came away with was: These Warbringers are females who pop up now and then, inheriting a curse from a female ancestor. Just by their very existence they bring about war when they hit the age of 17. There's a male in the story who also inherits, but from MEN, not females. Males can work with the curse to make themselves powerful. The girls just sit around while armageddon hits. Hm.
You'd think a concept like classic Diana (not modern one) would have a high time dealing with this, perhaps teaching Our Victim how to control her curse to bring peace to the world. She might reform the bad male in the story as well.
I know Ms. Simonson can do better; I've heartily enjoyed some rip-roaring tales (and entire series) from her. Here she's adapting a novel and likely ran into all kinds of editorial restrictions because of that. But still... I'm willing to say she had a bad few weeks but that's no reason why such should get past an editor without corrections.
There are problems when one adapts a story from another medium. Gone With the Wind (the movie) did away with most of Scarlett's kids, but kept the dialogue as well as the basic plot points. The Steve Martin Cheaper By the Dozen kept the dozen kids from the brilliant book (read it!) and discarded EVERYTHING else. I wince every time I see that ghastly thing being aired. Check out the current Little Women and contrast and compare to the book. Interesting, interesting stuff going on in the translation. (I still haven't figured out if the end is "real" or not.) Feminist themes have been expanded upon. A definite modern attitude has been applied that fits comfortably with the subject matter. Characters' definitions have been embroidered upon. Wonderful stuff! (Bring your hankies!)
In Warbringer there's a fat friend who is not Etta but seems to be cloned from her. (She's even a seamstress, like that one fairly recent WW series set in WWII had.) She and Our Victim have been put down all their lives for being People of Color. You feel sorry for them... until we see that Our Victim and her brother are richer than rich, part of the 1%. Difficult to pity people who in truth likely had zero social problems growing up because of their financial circumstances.
There was no joy in the story. No happiness. No celebration of the female principle. No amazement from Diana as she experienced the Outer World for the first time. Heck, it seemed as if both worlds were well-known to both sides of characters. Where's the SensaWonder I want in a fantasy story? Why is everything reduced to violence being solved with more violence? (How very patriarchal.) Why is death being treated so cavalierly? (Especially in a YA novel.) WAR HURTS. We didn't see that here, just colorful violence and an easy, video game reset mentality. War ain't like that.
As a whole I found the book to be disjointed, poorly illustrated and, well, boring. I can't recommend it. HEY, DC, GIVE US A GREAT WONDER WOMAN GRAPHIC NOVEL! Just once. Would it kill you? 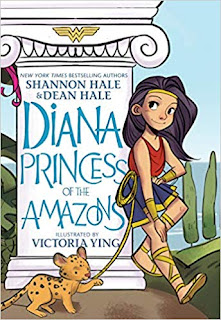 Another graphic WW story came out this week:
Diana, Princess of the Amazons. It's geared toward a much younger crowd than Warbringer. It's vastly entertaining! A great read for kids. It's (mostly) post-Crisis continuity, though Queen Hip is a blonde. They even got in Gen. Phil being her lover; cool! And it is QUITE FIRMLY based on Diana having been made from clay. Yay!

In it Diana has some problems (that poor mother relationship unfortunately comes up again, but is presented from a kid's point of view, so is likely a temporary anomaly), TAKES ACTION to find a friend, and then discovers some Lessons of Life. Recommended!

What are your thoughts about these two books?
Posted by Carol A. Strickland at 8:15 AM