No, really, I am planning on taking a real, relax-and-don't-think-about-work vacation later in the year. Maybe.

But this week's been busy, busy, busy, to the point where the guys working fixing up the house next door must be wondering why I'm wandering around my yard like Frankenstein, groaning and moaning. I'm sore! But the yard's looking three million times better than it did, though it's still got a loooong way to go.

Took the new cordless electric mower out for its first run this morning. The noise level is about half that of my dishwasher, but then again my dishwasher is pretty noisy. The mower's heavy as heck, which makes lugging it up and down the house steps (it must be on constant charge during the growing season) (guess I'll be buying that shed a year early so I can keep it there and run an extension cord from it to my outside outlet), but otherwise seems quite nice. Glad I bought it. It makes me feel superior.

While I was buying edging at the home improvement center (Home Depot's cost $3 less than Lowe's for 20 feet), I also took away a mountain of 2/99¢ daffodils, which may be on their last legs right now but will look spectacular next year. Got them all planted, along with the 99¢ hyacinths. Don't have the day lilies planted yet (Tuesday) and the hydrangeas haven't arrived yet (but I have their locations marked), but we're on our way.

Was able to pay some attention to ye kitties as well, though they do like to sleep. 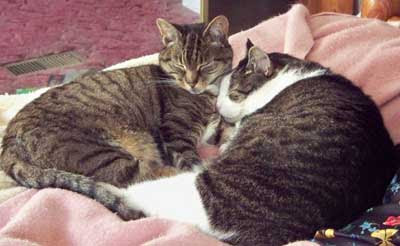 Sometimes Obi gets a little tired of Bran bothering him. Bran's got a lot more energy than Obi (he's two years younger), but Obi has his subtle ways... 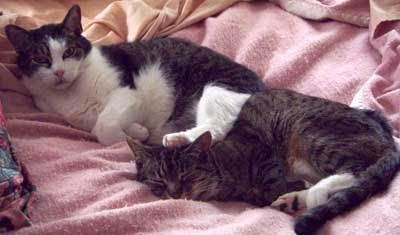 Got a lot of work done on ye wip, contacted Cerridwen YET AGAIN asking what kind of PR they're doing (no answer yet) (they have the worst email! I always have to send multiple times to them! How odd, considering that they're e-pubs). Sent "Star-Crossed" to them and it only took two tries before they said they got it. Will hear back within 4 months about if they want it or not. Don't really feel like complaining because THEY SENT ME A COPY OF MY BOOK!! Of course it was .pdf format and such -- they sent about five different versions -- but there it is! It's real! It's real! (And it comes out for the rest of you on the 7th.) I was so excited I ordered a Kindle so I could take it to work and show everyone.

And if that wasn't enough excitement, the week ended... Well, if you don't count today... with the annual Raleigh Plein Air Paint Out. I'd scouted the area we were painting six weeks ago but when I showed up Saturday morning the light was all wrong, so I cruised and cruised and painters were camped out at the more interesting spots (Boylan Heights is full of Victorian houses, which I think are interesting), but I finally found a couple of houses that seemed like they'd make a good composition. 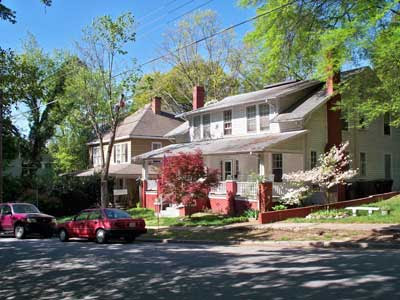 Didn't catch exactly the composition I wanted, but I figured: good enough. Funny thing: the white house is some kind of Christian fellowship something, and the first guy who came out of it to look around at the morning, let out a great curse involving God. How appropriate!

Anyway, I painted as fast as I could. Panic sets in quickly with plein air, and it's not just because the light changes so much every ten minutes. This was my first time painting outside with acrylics, which wanted to dry out as soon as I gooshed them out of their tubes, and instead of my usual 8x10 canvas, I tried a 16 x 20 with finished sides. Made the mistake of NOT bringing my "good" white, the one that's opaque. Instead I'd brought a bottle of Gesso, the cheap alternative. My opaque whites are all in gigantor jars, and I didn't want to lug them around. I had to fake it by doing layer after layer of transparent white until it started covering up stuff like it was supposed to.

I worked on the left side of the painting -- probably because guys kept going in and out of the white house and I didn't want them to think I was staring or anything, especially since they were doing their best to ignore me -- for far too long. Finally I got to the right side and one of the many folks, artists and residents, who kept strolling up to check my progress informed me that it was 2:00. I'd started at 9:30. I was hungry. I figured one more hour's work after lunch would finish the painting and so packed up (you do NOT leave your stuff laying around for people to take!) and took off to find the tavern that Local Color Gallery had recommended us all to eat at. There were supposedly other artists set up there finishing their paintings as well.

No parking. None. Every place was filled. The tavern patio had zero shade. I didn't feel like getting sunburn on my eyeballs.

So I found a grill with fair hamburgers (Weight Watchers was off for the day!) and excellent fries, as well as a gigantic, lovely iced tea (I'm very particular about my ice tea) that kept me awake until midnight, and then went back to the neighborhood to try to find a shady piece of sidewalk that wasn't taken by an artist or in an artist's sight lines to finish. 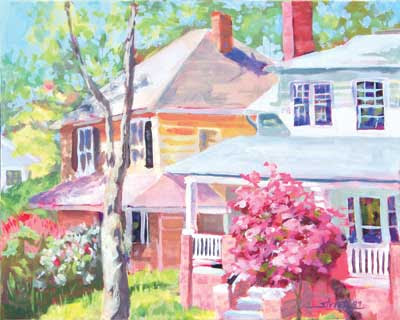 Meh. I'd even had a nightmare the previous night about this event and had finally decided that I wouldn't approach this as (a) a competition and (b) some kind of punishment that I inflict upon myself to make myself miserable. Instead I'd (a) appreciate the gorgeous day, lovely weather, hardly any wind, beautiful neighborhood, and (b) celebrate the joy of painting. Okay, so I got a little angsty in there, but all in all, well... I learned a bit more in completing this painting. People who came up to talk were very nice. Who knows? Someone might actually want to buy it while it hangs in a gallery for the next month (maybe plus, if it's chosen to be in an extended exhibit somewhere else in Raleigh, I forget). If not, I can fix this thing so it'll look good.

That bush/tree in the foreground -- it was a really peculiar color, or rather, combination of colors, but I NAILED that sucker. Until the value pattern didn't look right. Which it tends to do as the light completely changes as the day goes by. So I'm anxious to correct that, as well as the red and spring-green growth on the background line of bushes. And of course there's all the architectural details that need to be straightened up. (One of the other artists who was working near my car chose to paint a flat orange wall with some vines growing on it. When she came down to my area to check my stuff out, she said, "Architecture. Man, you're brave!")

As I was packing everything up to return to the gallery and turn my entry in, I discovered a section of side that hadn't been painted. Whoops! So I still had some white left that was wet, some red, and even a teeny tiny dab of yellow. I stuck my thumb in them all, mooshed them together, thought, "good enough," and filled in the area without dirtying a brush. Whew!

So: busy week. Sore back and ankles. Mountain of mulch in drive. Book in progress: in progress in a new program and better organized than it was. Book at publisher: definitely coming out. Didn't get through that Netflix movie that I've had for six weeks, but did discover that it was defective and so have asked for a replacement. Read some excellent books and one yuck one. Cats okay.

Oh, that painting is beautiful, as are Obi and Bran - dunno which is best!

You're always so nice! Thanks!!

And you should be doing your own PR. ECPI will be sending out queries to review sites, and those that are interested will request a copy of ECPI.

Welcome to the PR tour -- you'll be hitting them on all the loops!

Arrrgh. Thanks for all your help, Liz!!!