Taking a week off from "work." The paying kind, that is.

Sometimes when your life gets too chaotic you've got to devote some time to it in order to lay out foundations and organize.

This week I'm dealing with the yard. Spring has sprung and I just couldn't stand the condition the yard was in. Oh, it's lightyears better than last year, which was mega-lightyears better than the year before. But it's time it got to the point so other people can look at it and say, "I see what you're trying to do here," if not "Pretty!" It'd be nice if I could sit outside for a few moments and relax in its peace without being bothered by all the work to be done.

So I've had guys moving trees (one of which fell in the first wind we had. It has since been trussed up like a circus tent). Guys painting the porches and pergola (the one I put in last fall). Guys fixing the roof where it suddenly developed a serious leak last Friday.

I've started on the piles of topsoil that have been sitting out there for a year now and have worn away to great clumps of clay. They will soon be a fine lawn, filling in the spots where backhoes have scraped away all the good dirt over the years. I will mow that lawn with my new cordless electric mower.

Inside, I've been mostly working on ye wip, using a FAB new program called "Scrivener." There's a PC sorta-version of it out there as well. It lets one split up the work into individual scenes while keeping them linked for print purposes. You can also key-word the scenes as to what's happening, who's in them, etc. It's all very organized, which is exactly what my wip was missing! 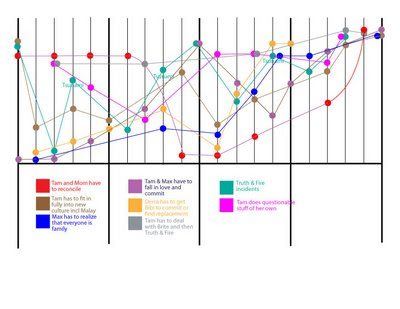 Why, it even inspired me to create a chart of various plot elements!

Later in the week I want to go out and paint. Not only are the azaleas and dogwoods coming out but the annual Raleigh Plein Air Paint-Out is this Saturday, and since I'm switching mediums to acrylic this year, I need to practice so I'm sure I have all required equipment at hand. Paint-Out starts at 9 AM but Jerry's Art-a-Rama across town doesn't open until 10, so they won't be visited until it's time for me to buy a frame for the finished picture (assuming I don't have a properly-sized frame already).

Oh-- speaking of dogwoods, we had a vendor come by last week who'd never heard of them. He's from Chicago. He treated some of us to a veddy veddy expensive new Italian place in downtown Hillsborough (Panciuto. http://www.panciuto.com/ ) and my oh my, it was one of the top five dinners I've ever had in my life! Worth every penny. Well, except the tea. Who serves ice tea in a tiny glass in which the slice of lemon takes up more space than the tea? Everything else was yummy to the max.

So I'm sitting here and working on this instead of everything else on my to-do list or in preparing for the release of Ye Book, which is some three weeks from now. At least my accountant finally called me that my stuff is almost done. That means I won't have to file for an extension! I was beginning to worry...

But it's all nothing that a wad o' money can't take care of. Isn't money grand to have? Tax time is wonderful for money because my stock stuff comes in in two checks that I have a tendency to go through rather quickly. But with everything underway I can just sit here, procrastinate, and wonder if that allergic reaction I'm having to the meds I'm taking for [insert slightly embarrassing medical sitch here] is ever going to go away. (Along with said medical sitch.)

I've heard of Scrivener; but there's something about plotting software that makes me avoid them. Hope it works for you!

It's not plotting software; it's organizing software. It doesn't suggest what you do next. It allows you to add lots of notes so you can see almost everything at once (the virtual corkboard) and if you key word your scenes, you can, say, run through just the scenes Character X is in so you can make sure his dialogue is consistent, that his arc runs the way it should, etc.

It never tells you, "You should put in more conflict now," or "You need to remember your B subplot at this point." For that you need to make your own notes to yourself.

It's also got a binder in which you can place all your research in its many program forms: pictures, urls, text files, etc., and then view them through Scrivener. You can even use split-screen at any point.

It's only something like $30. Jenny Crusie's MBs have a discussion of it that includes a link to a PC lookalike version of it. Oh, here's the url:
http://www.writerscafe.co.uk/index.htm