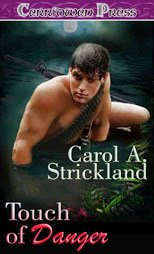 Well! The book came out last Thursday. WHOOPIE!!!!! I brought an armload of brownies and cookies in to work to give out. No, I didn't bake, but rather bought from the new bakery in town that everyone was raving about.

Don't know why. The brownies were flat and ICED (imho a sure sign of trying to cover up an unacceptable recipe), the oatmeal cookies had ground-up raisins in them (ah hates cooked dried fruit), and I was afraid to touch the chocolate chip cookies for fear of my Weight Watchers points going off the scale. But everyone said they really liked the stuff. Some said they'll buy the book. We'll see.

My sister finally chimed in a few days later and said she'd get the book and that my nephew and his friend were looking forward to getting it, too. Then I realized that there'd be just one copy shared between the three of them. Arrrgh.

Cerridwen had me going there for a while. They took the book off their site completely for the week before publication--what's up with that?--and the morning it was due out there was still nothing. Until 9 AM. Then it suddenly appeared and the angels sang! AHHHHHHHH!!!

So now what? I have mountains of material about how to publicize a book. Most of it deals with blogging and Facebook and guest-blogging (making sure often to refer to your book and/or the characters in it) and video making. I never could get anyone to pose for me for a whole three minutes so I could have some good visuals for a book video. Heck, I was even paying good money!

But a mountain of "to do" things and I don't get along. I freeze up. I sit paralyzed. I need to make lists and prioritize them, just like my heroine, Lina, does in my new fantasy adventure romance just out from Cerridwen Press, Touch of Danger. With everything to be done I've finally come to the conclusion that I need to make lists of lists: categorize different options, prioritize them, and then take each one step by step.

So what's first? What would you do? I'm a guest on a Listmom next week (the same day as my root canal), so we can check that off. But how many people will see that?

What I'd like to do is blast the fact that I have a book out across the DC Comics message boards. But that would probably get me banned for life.

Hm. Would it be worth it? How long would it take the mods to swoop down and eradicate my posts? Hmmmmmmmm...

Press releases will be an A goal. Get one written; get them out.

Check into Facebook ads. Apparently no one's doing 'em yet in the Cerridwen community, so I'd be an experiment. Well, someone's got to go first.

Any other ideas for right-away publicity? Say, have you bought your copy yet?
http://www.jasminejade.com/p-7215-touch-of-danger.aspx

And oh yeah, I'll have to finalize things for that contest. Think I'll go with the adult DVD idea. High perceived value and all that...
Posted by Carol A. Strickland at 2:13 PM

Congrats again, Carol! This is so exciting!

That said, there are TONS of free ways to promote your book. Check out my other site, http://www.promo-ho.com for some ideas (and rather an overwhelming amount of them). Just pick the ones you like and use those. If you don't like doing it, then don't! I think the best promotion is done because it's fun and you enjoy it.