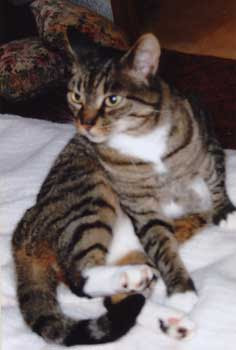 I talk about Obiwan a lot but don’t want people to think that his younger brother by 2 years, Bran-Bran, is going ignored. Bran’s more independent than Obi in wanting to be outside. Even when it rains. Sometimes I think he’s half duck.

Obi loves to be petted. As he’s senior-fied, he likes to sit on the bed and daydream for hours, but he still gets in his petting time. Bran, not so much.

He’ll sometimes get on my lap in the morning when I’m trying to eke out extra time to exercise, and this is such a rare event that I’ll pet him. He loves when I rub the inside of his ears with my pinky. Oh, don’t cringe! The queen of England hand-picks fleas off her dogs and throws them (the fleas, not the dogs) into the nearest fireplace.

During the oo-mox session (look it up!), he’ll purr. And when I mean Bran purrs, he PURRS. It’s supersonic! This means (a) he approves of me, and (b) it’s snackie time. Bran doesn’t have the keenest of inner clocks. For him it’s always time for dinner.

Obi has to take a quarter-tab of heart pill twice a day, so I soften the blow with some kitty snacks. And of course to dispel jealousy, Bran gets them at the same time. So in the mornings and at night PURR PURR and I get up to get him some snackies and give Obi his pill, and then Bran goes out to watch the world. (He’s got a favorite spot in a window box that he took over after Katie passed away. She used to lay there all the time as well.)

On the weekend Bran will get up on the bed in the morning and settle next to sleeping me. PURR PURR PURR. Then lick-lick my nose until I haul myself out of bed (fifteen whole minutes later than normal!) and get his breakfast. The licking, I’ve learned, is a sign that Bran thinks it’s mealtime.

Bran has realized that licking is out of range if I’m at the computer. I ignore his purring. Therefore, he’s developed the “Mommy’s leg is a scratching post” technique to get my attention. Occasionally I’ll get up and either put five more tiny pieces of kibble in his bowl to pretend that I’m feeding him a meal (he buys the idea), or I’ll sprinkle brewer’s yeast over the bowl. Sometimes I’ll sprinkle catnip on his scratching board in hopes that he’ll tire himself out on it.

When Mommy comes home from work, that’s supper time. On the weekends when Bran comes inside and spots Mommy, that must mean that it’s supper time. Even if he finds Mommy fifteen times in an afternoon. He’ll sit there looking at me and lick his lips, dealing with the anticipatory saliva without relying on Pavlovian bells.

During his nighttime petting sessions, he often will get enough and then stretch out between my knees on the lounge chair, his head pointed at the TV. In the past I switched to Animal Planet for him, which he liked to watch if they had four-legged animals traipsing around, but anymore Animal Planet doesn't show many land animals, so Bran daydreams in front of Alton Brown or Jon Stewart until it's snackie time.

Bran knows what “What do you want?” means. (It means; “Mommy’s going to follow me around, so maybe I should get up and walk a bit.”) He definitely knows, “Do you want to go out?” “Do you want to come in?” Me repeating that to him so often has allowed Obi to realize the meaning as well.

And of course Bran likes to be chased around the house. He thinks he’s hot stuff when he hides from Mommy. And he wonders why Mommy peeks around corners at him, but loves it when she lunges for him when he comes to investigate! Then it’s high-tail down the back hallway to play keep-away!

So Bran is not ignored!
Posted by Carol A. Strickland at 7:49 AM

He's beautiful! I love the stripes.

I miss having a kitty in the house. The poor guy always thought he was a dog. :)

I think Obi is my dog MacDuff reincarnated. Does that count?

It'll be very strange once the house is cat-less. I've promised myself no more cats, so I can travel without guilt at some point. How do you get along without someone who purrs? (Or is that not a problem? :^D )