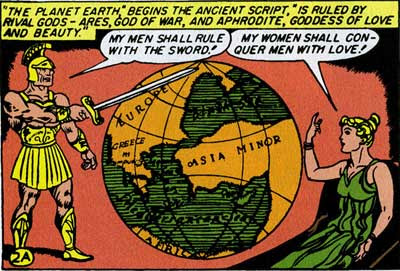 Let us turn to the Book of Wondie. In the beginning, Wonder Woman was created as an Amazon. Back in the Forties her creator had an extremely limited pool of origin possibilities that would allow her to bound into the world as a feminist woman who could receive a fair bit of respect just for being herself. She could have been a cowgirl, but Marston went with the choice of Amazons, which also allowed him a base of mythology to work with. And the origin was good, amen.

By classic definition, the Amazons were an all-female society. I have heard many readers of late deriding the DC version for turning their backs on men in order to form that kind of nation. Those readers are showing their ignorance of the mythos.

While the no-men rule for Amazons in the Golden through Bronze Ages may be a little murky it its origins (GA Aphrodite went by the rule that men are violent and women are peaceable, and so she created the female nation to counter Mars/Ares’ violent plots), the Modern Era of Wonder Woman clearly shows us that the Amazons—well, the Themysciran Amazons—had no choice in the matter. Their gods created them as an all-female society (we are NEVER told why) and directed them to be exiled on a hidden island for their sins, and that was that. The Amazons had to obey.

Unfortunately this single-gender origin begat an ongoing sub-theme that continued even into the modern era: That women are good, men are evil, and that all are best off if they keep to their separate playing fields. This odd idea is a twisted echo of what is too often encountered in the world: that men are superior, women inferior, and that if men are contaminated with feminine ideas they are no longer worthy of respect.

The battle of the sexes has long been a source of drama and humor in fiction, but when used as a constant element in order to degrade an entire gender or over-celebrate another, it’s unhealthy and not entertaining in the least. 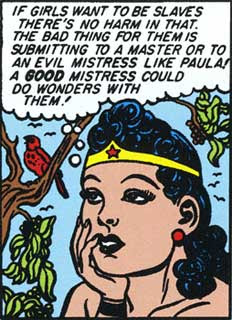 In the Golden Age Wonder Woman often demonstrated that violent, evil men would be so much better if they surrendered to Loving Authority—which was only available from a woman.

To make matters worse, the Amazons couldn’t even allow males to touch their island. Male cooties would bring doom to them! Also, if men tampered with Amazons’ bracelets, the action let loose insanity and uncontrollable rage. The Amazons lost their power because of men. Men are just bad news in every way, aren’t they?

Did any of the WW creative teams ever think that if they kept slandering the vast majority of their readers, there might be some kind of backlash or resentment toward WW? Do guys really like to be told they’re evil? That masculine qualities are bad? Let me tell you: women haven’t enjoyed being told the same thing about themselves over the millennia. Women resent it.

Yet with all this, from the first Wonder Woman’s basic theme has been that of empowerment of the disenfranchised. Often her readers and some creators have seemed to think that “disenfranchised” meant only women, but if you look a little harder you’ll see that WW stood up for just about anyone, no matter the gender, who was attacked because of close-mindedness.

Now, I can understand this separation of genders in the Forties. Society was very much like that, though it was just beginning to change, creaking around to a new stance. With the end of World War II, it tried to snap back and couldn’t. The genie was out of the bottle.

In the Sixties we had the Women’s Movement making headlines. Women, especially loud ones or ones in groups or ones in loud groups, were to be feared and ridiculed by all too many men. They had to be kept in their place, kept under control, lest men lose their power.

As the Movement became more mainstream, why was it that we still saw women and men so separated in comics when they weren’t in real life? Each had their own playing field assigned to them. Most comics readers were expected to know that if the women ever snuck onto the men’s turf, they’d quickly be put in their place and humiliated. In order for that not to happen, it was best if the women kept meekly to their own arenas. Wonder Woman often kept this separation in the spotlight and celebrated it.

How did Diana feel about the gender wars?

I’ll admit that comment was a one-time event. But it’s still astounding that it would ever see print. Its presence says much about the gender bigotry that all too often seethed below the surface in the book.

It wasn’t just Diana. DC as a company has often seemed to relish pitting men against women. They make sure they have their separate venues. WW lucked out because both the JSA and JLA needed token females, so she was associated for long years with each team and thus shared in the prestige there. When Diana left the JLA, her girly chair was filled by Black Canary. It was some time before the teams truly integrated by gender. 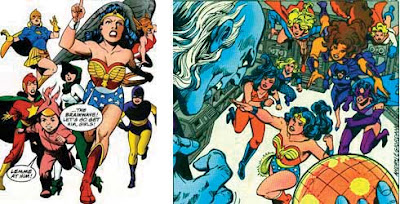 The more modern DC has seen a number of events in which the players were separated out by gender. Often these occurred in Wondie’s book, such as the Adjudicator arc in 1982, in which a galactic bigwig battled a gamut of DC’s more well-known heroines. During Phil Jimenez’s WW run in 2001, he had Circe turn all the male heroes into animals, while scads of female heroes from both forgotten series and successful gathered to save the world…and fight hordes of female villains.

As recently as Blackest Night we saw an entire legion of ring-bearers, the Sapphire Chicks, that was made up only of females who dressed in skimpy pink outfits, all just oozing luv. Of course no male in their right mind would deign to be a member of that group! The idea! Besides, it was pointed out that men don’t have the same capacity to love as do women. Uh… Say again? And does this mean that women don’t have the same capacity as men to feel some other emotion(s)?

What century is it again?

The Jimenez era of WW surprisingly ushered in male Amazons, fully integrated and welcomed as immigrants, and accompanied by thousands of male visitors and students to Themyscira. Imagine the intriguing possibilities this brought! Finally the “women are good; men are evil” theme must be eradicated within the pages of WW. We’d see how the genders working together could make a better world and better Wondie.

The male Amazons were done away with within the course of a few panels during the Rucka era and never spoken of again.

Guy heroes have guy villains. After all, it’s ungentlemanly to hit a woman even if she’s trying to blow your brains out. Of late, they’ve managed to have a handful of female villains as well and some have even turned out to be interesting and not just there to be “bad girl” romantic interests.

But Wonder Woman has been plagued with a high ratio of female foes from the beginning, so she could fight the women that her male cohorts couldn’t. Only Ares/Mars and Dr. Psycho come quickly to mind as WW’s male villains, and Dr. Psycho is a little person, which is a comic book way of telling us that he’s not quite a real man. (Comic books can be cruel.)

But Wondie not only has female villains by the score, she has them forming all-female teams. Villainy, Inc. was only composed of women in its first incarnation, and when it was revived late in the modern era, it was all women again. There was nary a male token in sight.

In the current third volume of WW, we have faced an opening arc in which villains ganged up against Wonder Woman. All of these were women, except Dr. Psycho, who is still a little person. An evil version of Herakles was also used (sometimes he’s good; sometimes he’s evil; writers can’t seem to hold his character steady), but not as part of the villainous, loosely-grouped team.

A few issues later we saw the nation of Amazons used as a bloodthirsty army that destroyed Washington, DC and many other places, massacring innocents as they went. Remember, they’re a group composed entirely of females. (It’s just been rewritten that this hellish army of tens of thousands was actually only about a dozen renegades. Right.)

The current Simone run has also placed an emphasis on separating out the genders. The run began with an all-female group of murdering villains, the Circle. They had a reason for not being inclusive, as they were Themysciran Amazons. The story progressed to include a group of villainous (or wannabe villainous) apes, all male. It then moved on to a large group of super-Nazis, of which two were female, which is extremely minimal integration.

We’ve also had ancient Greek warriors, zombies and all male, added to the WW cast. They first appeared as villains and were led by Achilles, who was just following evil orders from the mad/evil male god, Zeus. These Manazons/Gargareans now live on an island which no female can approach.

A new group of villains, the Crows, appeared: all boys, all up to no good in a murderous way. In the most recent issue of WW we meet an outer space captain who commands an all-female force and wants to decimate the Earth, except for 100 of its most accomplished citizens… who will all be women.

So the sexes are still kept very separate in the pages of Wonder Woman and within the DCU. What purpose does this serve here in the 21st Century? Doesn’t such a constant barrage of anti-male sentiment drive readers away? If we kept getting stories concerning groups of villains who were, say, all Black or all Asian, and if characters were allowed to complain over and over about how such-and-such race was inherently evil or good or if they were only subtly shown to be so, wouldn’t readers complain?

The reason the genders are so separated in the pages of the modern WW is not because of the gods’ whims, but those of her creative teams. Isn’t it time to end the segregation?
Posted by Carol A. Strickland at 9:56 AM

This article was printed before issue #600, which gave us yet another all-female cape army battling a gender-specific foe, and the "not-Wonder Woman" era, which so far has portrayed evil, violent men vs the passive but good female Amazons.