What's in a Name?

Anyone who’s paid attention in school, or recalls the words to Schoolhouse Rock, remembers that a noun’s a person, place, or thing. Easy enough. “Hey, Batman, go to Gotham City and take down the Joker and Penguin!” Four simple nouns.

But with Wonder Woman we have problems:

“Wonder Woman, go home to Themyscira because the Hecatoncheires, Briareos and Cottus, have joined with the Bana-Mighdall to overthrow Hippolyte!”

Ouch. Look at all the syllables! Look at the weird spellings! Please don’t make me read that sentence aloud. It doesn’t help that “Wonder Woman” is four syllables in a short ‘n sassy world, but she’s also got all this ancient Greek baggage to cart around. She’s constantly being besieged by ancient Greek threats, and her sister Amazons are often stuck with names that can make a reader stop and ask, “Am I supposed to be able to pronounce that? Doesn’t she have a nickname?”

On occasion magic users even slap a spell on Diana, chanted in Greek—sometimes at great length. It might even be ancient Greek for all I know, but I doubt it is. Perhaps I should flag down some of the many, many people in the DCU who not only can read ancient Greek fluently, but can pronounce it like it was 3200 years ago, and they were raised in the suburbs of Sparta. Lucky guys. I can’t.

It’s all great for atmosphere but hell to plow through. 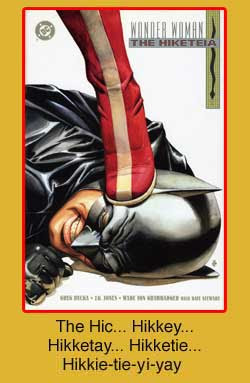 Why, one of Wondie’s graphic novels was titled, The Hiketeia. That’s pronounced, uh, how?

Poor Diana of Themyscira (a misspelling of the city, by the way, perpetuated in Volume 2 and 3 of the book; it should be “Themiscyra.” Bronze Age stories got it right. Guess “Paradise Island” just isn’t hip enough these days.) has not only to battle ancient Greek foes constantly but try to pronounce their names as well.

Thankfully, the JLA cartoon told us that “Themyscira” is pronounced, “the mascara.” But a reader of comic books shouldn’t need to keep a pronouncing dictionary in hand to get through a WW story. They shouldn’t be lazy like SOME people (okay, like me) who look at these long words, decide not to take the effort to figure the pronunciation, and abbreviate them. “Wondie, go home to The Mascara because Zeus’ big monster guard guys have joined with the Bana to overthrow Hippy!”

Wondie’s got enough things operating against her in her quest for a larger readership. Why must we pile more on her?

To make matters worse, the modern WW mythos suffers from an awful lot of name-doubling. Though there are doubled names many places in the DCU, especially among the new heroines of the Young Justice era, there seems to be a megachurch-sized congregation of them within the pages of WW. 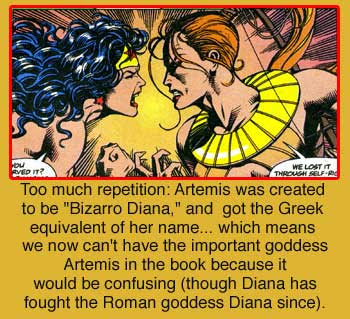 There’s Julia and Julia, Artemis and Artemis, a slew of Hippolytas/Lytas, and an entire squadron of Trevors, to name just a few. Some people like Achilles get stuck with multiple names like “Warkiller” and “Olympian” (which is also the code name for another character recently used in a WW-related book). Someone call the Amazon librarian, Mnemosyne, and get some more examples, will you? No, she’s not the famous mythological Mnemosyne, she’s the Amazon one. Min… Nim… Nemmie… Oh, forget it.

Don’t get me started on Donna Troy, she of the infinite origins and names. And please, writers, don’t bring back a completely dead character like Medusa and change her name (and powers/skills) to “Medousa.” Why are you trying to make things more difficult?

I’m big on simplifying the WW mythos both to help new readers (and myself) but also to streamline and focus the character. One of the problems the new creative staff should look at could be nomenclature. Keep it simple. Remember that the American school system is turning out kids who can’t even read basic English well, and texting isn’t helping things, u no. 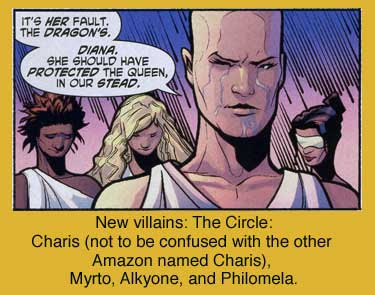 Perhaps this problem could be solved merely by having Diana encounter threats that are NOT related to ancient Greece. Oh my, the idea! Perhaps it could be helped by Diana leaving Themyscira and concentrating on where she should be, Patriarch’s W—I mean, the Outer World.

Wonder Woman is such an exciting concept. She’s one of the premier get-it-done capes of the DCU, a fascinating character with layers of intriguing personality and unique ability/skills out the wazoo. Yet she’s a female in a medium directed at males. She has suffered from creative staffs that had little or no regard for her because she was a woman. She’s borne the burden of creatives who haven’t understood her in the least, or sometimes even deliberately set out to screw up her mythos and themes.

But through it all she’s survived. Diana shouldn’t face the additional challenge of requiring her readers to battle their way through a continual avalanche of long, odd words.
Posted by Carol A. Strickland at 9:27 AM

What's really unforgivable to me is that the writers don't make a simple effort to employ Greek names properly. They've just lazily slapped some names on characters without doing any homework or research into Greek, despite being PAID to craft stories in a quasi-Hellenic setting. "Phillipus" really gets my goat -- that's not only a Latinate form, it's MASCULINE. An Amazon would be named "Phillipa" or "Phillipe". Would it kill those writers to look at a Greek phone book o glance through a work on ancient myth o history and select appropriate names, even if they can't be bothered to study some rudiments of the language?