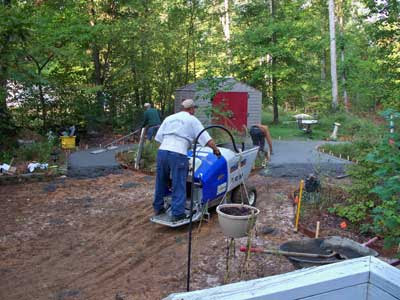 I've tried all kinds of ways to control the weeds in my backyard, which is also my septic field. I've had bulldozers come through twice, but the weeds eventually prevailed. Closer to the house, I once had a crew who swore they could smooth out the terrain, make matters so bad I couldn't even DREAM of getting a lawn mower through. So the weeds grew. And grew.

Finally I decided the time was right to go for that back patio. I mean, just get an estimate. A friend at work, who had previously recommended some real idiots (and who eventually admitted that the guys were idiots when they did a second job for her) recommended a guy from her church who built in-ground swimming pools professionally. As a sideline he did other concrete work, like patios. 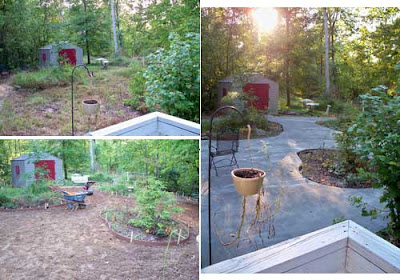 So last winter he came over to give me an estimate. I knew the costs would be astronomical, but I just wanted to know what neighborhood such a project would be in. I used landscape paint to outline my dream patio. Surprisingly, he estimated a price I could come up with by spring if I scrimped! Wow!

Spring came and he came back to confirm. His price doubled. If this hadn't been a recommended guy, I would have waved bye-bye to him. I explained there was no way I could afford the patio now, but by fall I could. He tried to pressure me into doing it right then, another danger signal. Sorry. Please call back in the Fall.

On the way home, he stopped and phoned me. If I could give him a sizable deposit now, he'd freeze the price, no matter how the cost of concrete might skyrocket. Against my better judgment—I mean, what was I thinking?—I accepted. And his price was now $500 more than it had been a half-hour before.

No, no, no, this isn't the way to deal with contractors! But still, the winter price had been astoundingly low. This was probably reasonable. I tried not to beat myself up too much about it. And I cancelled all plans to go to RWA Nationals or on a vacation I'd had my eye on for a couple years. This would clean out ye savings pretty well. (Don't tell Suze Orman!)

The project was scheduled for last week. A medium-sized crew arrived to begin making forms. Apparently there'd be no digging down; the concrete would rest on the ground as is. But then Tropical Storm Nicole came through with about five inches of rain. The ground was too soggy for concrete.

Yesterday a full crew arrived before dawn. It was a vacation week for me, but I couldn't sleep in. The truck carried three loads all in all (24 cubic yards), and everything got poured. After a while the crew pulled most of the forms off and then applied a broom finish.

Today work began at about 9 (while the cats and I were at the vet$). There was cleanup work to be done, expansion joints to be sawn, hosing-off of the surfaces, and more flowers to be trampled. 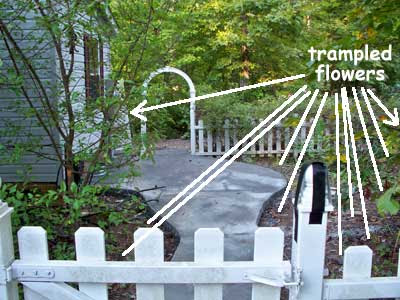 Oh, did I mention the trampling? The crew's original way to get into the back yard was deemed too soggy to travel, so they came in through the side flower garden via path and plantings. My trellis had to be dismantled (bye bye clematis) and moved.

Then the low, decorative cement block walls in the back came apart, to be tossed into my iris beds. Brick edging was tossed willy-nilly. Bye-bye, rose bushes and daylilies. Don't know how or why they got back into the baby hydrangeas I'd been nursing through the drought, but they did. At least I'd moved a few azaleas that were in their original route's way, so those survived. I will give them points for digging up my favorite azalea and moving it, but they tried hard to mutilate the lovely rhododendron next to it.

But the patio's done now. Our contractor, a very friendly guy, happened to hear about a problem with my bathtub drain and fixed it (it was much more difficult than he'd thought) (he's licensed for plumbing), and when I asked him to reiterate the steps in how to chlorinate a well because I was going to do that the next day, he gleefully dumped the supershock into my well, though I wasn't prepared in the least for immediate chlorination (no drinking water! No washing water! Luckily, I'd done laundry the night before, or I'd be out of clothes). I'd planned on doing some scrubby house-cleaning, which was now out. And I ran back to stop the guy hosing down the concrete next to the fish pond. Chlorine and fishies don't mix. 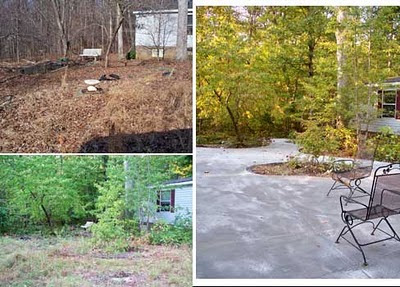 (The bench above overlooks my small pond, which the contractor is keen to do a waterfall for next year.)

Everything concrete-wise looks great. Oh, I'll need to hire a crew to come in and help raise the ground level to be flush with the cement (more ca-ching), which will be difficult because THE JOB TOOK $400 MORE THAN HE SAID IT WOULD and he never asked when the time came to go over the total we'd agreed on. (He didn't charge for the drain and chlorination, which would have cost about $400, though I'd planned on doing the chlorination myself. Oh well.) There's a low spot on the patio around the pergola column on the left in the bottom pictures. He told me how he'd had to... well, something, which meant that spot would be low. He says he calls such "birdbaths." I can't do anything about it, but will try to remember that a small "birdbath" is better than the large pond-bog I usually got in that spot pre-concrete.

I'll pray that the rose that is snapped in half will grow back, and I'll see what I can do to try to save the other flowers. Hoping that many will just come back next year, since it's so late in the year now that they might as well have been hit by frost.

I'll try to make it to the next payday without bouncing anything. MasterCard is going to love me. It will take some time, but I'll get back on my financial feet and dive in again with more yard and house projects. Next: fix that big hole in the living room wall where the built-in analog TV used to be. I really should get some nice-looking furniture for the patio. And after that... 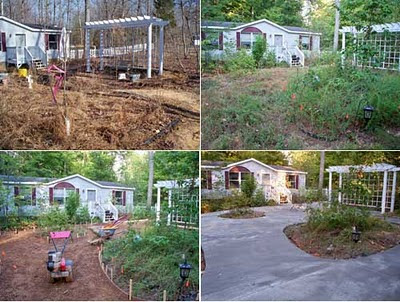 I can't be the only person here who works on home projects. What have you done lately around your house? What are you planning to do?
Posted by Carol A. Strickland at 8:53 PM

See, you have ambition. We have no idea what that's like. We've painted the exterior of the house (twice) over the 20 years we've owned the house, but other than that, we've only done things when forced. So your patio is gorgeous and you'll enjoy it for many years! Plants come back! Roses are resilient!