Living by a River

[It's a very special day! Not only does "Strickly Speaking" get its very first guest-blogger, Nancy Lennea, but her book, Destiny's Mountain, is being released today! Let's hear her talk about what inspired her. —Strick] 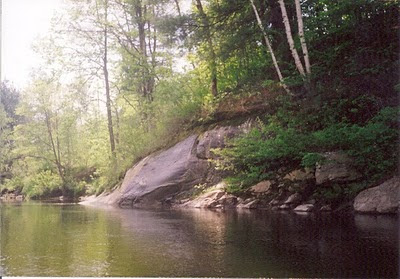 Tree swings, sandy beaches, sunny summer afternoons…I grew up within walking distance of the Long Island Sound and learned to swim at an early age. A young girl’s confidence to swim and snorkel while gathering hermit crabs morphed into a teen’s lazy weekend dates at the ocean on Long Island’s southern shore. The waves were intense, but I grew confident in my ability to stay afloat or to dive beneath the breakers.

Everything changed after college when I met and married a New Hampshire man. We settled in Rumney, a small town, population-wise (under 2,000), but large in acreage (over 42 square miles). Lakes and mountains filled this area and we bought our first house within walking distance of both the Stinson River and the much larger Baker River. Even back then, I filed away these memories. Many of these images came to mind when I sat down to write DESTINY’S MOUNTAIN, my latest release from Red Rose Publishing.

My husband and I soon discovered a sandy beach beside the new Baker River bridge. We brought our two dogs. The brother and sister were mutts we adopted from the pound (the family joke is they were practice before we thought about having a child).

I remember quite clearly swimming when the male accidently clawed my hand. As we loaded them back into the car, I noticed the diamond was no longer sitting in my engagement ring! My husband and I, ever hopeful, ran back to the water. This is when we discovered that the sandy bottom is made up of crushed gravel, river rocks, and…mica! Mica shines like diamonds. Finding my tiny stone among the thousands of sparkling bits of mica was a lost cause. 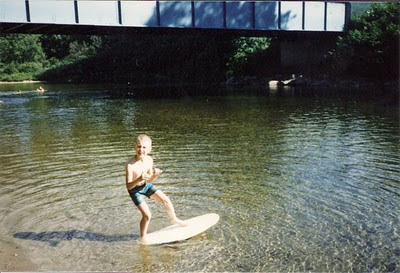 Years later, when our sons grew older, a time came when my rapid heartbeats mirrored the moment I lost my precious diamond. My oldest wanted to go swimming with his friends. In the river. Without me.

There comes a time in every mother’s life when she has to let go. Allowing my young son to go swimming without me put my confidence to the test. Had his father and I taught him to swim well? Could I trust the other boys not to hurt him? Would he break an arm swinging from the rope swing? Would a canoeist paddle around the bend and crash into him?

My husband and I had ensured our sons learned to swim from an early age. We visited relatives who had pools or took us to the ocean. Every trip to a hotel included a pool and my sons enjoyed every minute. Did anything happen to either child at the swimming hole? Not a thing. An ounce of prevention made sure everything went well. They will remember their hot summer days spent with their friends down at the old swimming hole on the Baker River.

The Baker River is a popular canoeing destination in the spring and early summer before the levels get too low to navigate. After hearing so much about it, we became the new owners of my father-in-law’s fiberglass canoe. After patching holes and repainting it, we strapped the huge canoe onto the minivan’s roof. The boys wore borrowed life jackets, and we packed a cooler and towels. Wearing shorts over our bathing suits, we parked one car at the swimming hole and headed to West Rumney. 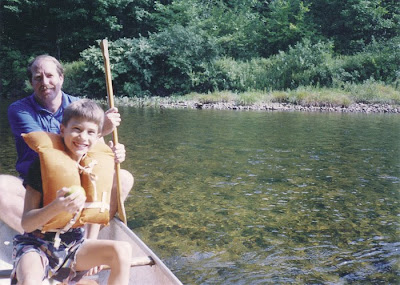 It took over three hours to go what would have taken us fifteen minutes to drive. But what fun was had during those three hours! As a family, we worked together and took turns paddling, watching wildlife, and picking spots where we could stop for a swim or a lunch break. Memories like that will stay with us forever.

---
Fear is a strange thing. It changes everything. There is only one place where I actually enjoy fear. That place is in a book.

Some people are naturally fearless, like my heroine in DESTINY’S MOUNTAIN. She skinny-dips under a gushing waterfall. My hero stumbles upon her. Lots could happen…and it does! I use fear a lot more later in the book, set in a quirky New Hampshire college town nestled beside a river and eerie mountains. A couple of stalkers, a murder, mountain rescues, and wildlife give me ample opportunities to scare my readers.

DESTINY’S MOUNTAIN recalls that time in my life when the mountains called to me and the river calmed me. I swam in it, canoed down it, photographed it, raised a family near it, and painted it. Its fearsome springtime currents and gentler summer coolness helped me create a manuscript that will keep my readers on the edge of their seats while giving them a happy ever after. Read on!

In a quirky college town surrounded by the mountains of New Hampshire, new art history professor Jacob Oliver hikes a trail on a crisp September morning. Divorced and forced out of his job with the Boston Police due to a horrific accident, he spots a naked woman beneath a majestic waterfall. Escaping, he falls and re-injures his knee.

Destiny Blake hears a noise; someone is on her mountain. She finds a handsome man sitting in the mud. Love blooms and lust consumes them after she helps him to the safety of her cabin. Soon assumptions tear them apart, leaving her vulnerable to the unwanted attentions of other men.

When Jacob decides he cannot live without her, he must save her from a madman who chases her up her mountain through the cold, snowy darkness of a November night. Ghostly voices push Jacob onward, while another spirit’s voice urges Destiny to fight back. Pain, hypothermia, and death threaten before the sun rises. Can Destiny and Jacob make it off Destiny’s Mountain…alive? 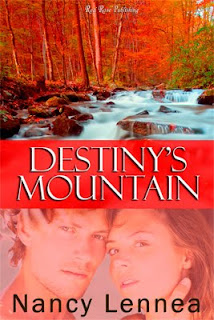 Much later, Destiny reheated his coffee, returning the mug to him as he lay blissfully content on her bed. Her slim fingers wrapped his knee with the bandage while her silky lips kissed him from toe to thigh.

Watching her, Jacob sipped his coffee. Suddenly exhausted, he set the mug on her nightstand then relaxed back into her pillow. Even from there, her hair smelled sweet as it cascaded over her shoulders and between the lovely breasts visible inside her robe.

Destiny stood with her hands on her hips. “Your only mission today is to rest. I washed and dried your clothes. I’ll drive you home whenever you wish. I also called the police.”

“Relax. I told them what happened in case you were missed and let them know your car is parked at the trailhead.”

“Thanks. I never thought to call them.”

“I didn’t know your license plate, and you didn’t tell me the color, but I suppose there aren’t too many Land Rovers around here.”

“It’s a bit ostentatious, but I used to take trips into the mountains and—”

“Long story.” Why bring up painful memories now? He saw no need to dwell on things long dead, like his perfect life—before my accident.

“If you want, we can call a tow truck, but the police don’t plan to ticket you.” She bent over the bed and pulled the sheets and blanket up over his chest. When she ran her fingers down the long scar on his forearm, her gaze shot up and locked on his.

“How did this happen?” She turned off the radio, then sat beside him, still caressing the wound.

“I chased a robbery suspect across a rooftop. The surface had turned to glass due to a recent ice storm. I took a ride down the roof and landed in a scraggly stand of trees. The trees won.” He forced a smile.

He shrugged it off, downplaying the event. Still, when he glanced at her shadowed profile, he recognized her concern in the lowering of her eyelashes and her unusual silence. Reaching up, he pulled her into his arms and kissed her.

“Guess I forgot to mention I used to be a cop. A lifetime ago,” he sighed.

“I had a bad accident while in a car chase and broke my leg. Crushed it pretty bad, actually.” Jacob rubbed his thigh through the covers, then tangled his fingers in the silken strands of her honey-gold hair. A foreign sense of peace washed over him.

“I thought I had fully healed, and then this happened.” He laid his head back against the headboard. Regret for the past cramped his stomach.

“Do you miss being a police officer?”

“I regret having been forced out. That fateful night spun into a turning point in my life. A very unhappy turning point.”

“Well, you’re definitely not the geek or stuffy teacher I expected you to be when I first saw you at the dining hall.”

“You’ve seen me before? How the hell did I ever miss you?”

Tell us about Nancy

Nancy grew up on New York’s Long Island then attended college in the beautiful mountains of New Hampshire. She worked during college in the dining hall while earning a degree in art education. She met her husband on campus and they raised a family in a nearby town. She volunteered as an EMT/firefighter on the Rumney fire department then worked for the State of New Hampshire as a 9-1-1 Emergency Medical Dispatcher. Retired from public service, Nancy now writes full time, lives in North Carolina, and is a member of Romance Writers of America, Heart of Carolina Romance Writers, Fantasy-Futuristic & Paranormal Romance Writers, Celtic Heart Romance Writers, and Sisters-in-Crime. She also writes paranormal romance, such as her recent release, DRAGON’S CURSE, as Nancy Lee Badger.

How can readers buy your book?

DESTINY’S MOUNTAIN releases today and is available for download from Red Rose Publishing. The buy link is: http://bit.ly/a4NOHE
Visit my website at: www.nancylennea.com
Visit my blog at: www.nancylennea-inlove.blogspot.com
Posted by Carol A. Strickland at 7:52 AM

This makes me want to go out this weekend and paint the Eno River. Loved the story about your engagement ring!

Thanks so much for guest-blogging!

Thanks for having me! The photos of my boys (hubby, Rob, and Eric) enjoying the Baker River in Rumney, NH brings it all back. It was a great place to raise a family. We miss it. (And I still miss my diamond!)

But someday a hundred years from now some lovesick guy, too poor to buy an engagement ring, will find your diamond and present it to a girl and they'll live HEA because of it!

Big congrats on your release today! How wonderful that you were able to use so many happy memories in the creation of the book. And I hope your husband bought you another diamond!

I yearn to go back to those lovely mountains you describer so beautifully. I am in the middle of reading Destiny's Mountain and completely caught up in her adventures.

The book sounds wonderful, Nancy. It's definitely on my To Read list once I make it through my basket!

Great first interview, Carol. And Nancy, this book sounds like a winner.
Congrats on the release!

It was fun answering Carol's questions and hunting through boxes of old photos. The few I choose show my men as boys and how happy they were with our choice to live in Rumney, NH.